There are few pursuits in life more costly than boat ownership and equestrian competition of any sort. Somehow, precision rifle competition feels like it’s a not-so-distant third place in that ranking of activities. It’s not uncommon to see Precision Rifle Series competitors pulling $5,000 worth of gun and glass from hard cases and shooting $250 worth of ammo during a match weekend. Add travel costs, a weather meter, ballistic computer, shooting bags, ear pro, and on and on. All that, and we haven’t even covered the cost of practicing with your 6.5 Costmoor.

Much like gas prices, ammo is a futures market. Climate change, natural disasters, military contracts, and White House press conferences can influence the price per round just as much as the price per gallon. And once it goes up, it never quite falls back down to what it used to be in the good old days. While no caliber has been left unaffected by the myriad political panics of the last decade, shooting .22 Long Rifle continues to provide a substantial savings over its centerfire brethren.

Despite a brief period of purely outrageous rimfire prices, that particular corner of the ammo market has seemed to rebound fairly well, with a quick internet search showing bulk purchases as low as five or six cents a round. As we’re typing this, we’re looking at 5,000 rounds of Federal Game Shok for less than $325 … and very strongly considering a typing break to whip out the old credit card.

With prices like this, it’s no wonder that rimfire rifles, and rimfire ARs in particular, are making a comeback. We rounded up a handful of them — a couple of well-established market staples and a few newcomers — and gave them a thorough wringing out

MORE THAN JUST A PRETTY FACE

Not all AR clones are created equal. It’s one thing to build a .22 that looks like an AR-15. But that doesn’t mean it’ll run like one. While the basic aesthetic is relatively simple and can be accomplished by dropping existing rimfire actions into a plastic chassis, switches and buttons may not be faithful to an actual AR. This may or may not be a deal breaker for you depending on your needs, but it’s something to consider prior to sinking your hard-earned green.

The rimfire AR market has made great strides in recent years, and several of the selections in this guide will accept triggers, fire controls, and furniture made for full-size guns. With customization being the name of the game in today’s black rifle rodeo, this one-for-one crossover not only reduces maintenance and parts replacement cost, but also allows us to create true clones of our duty, defensive, or competition guns that feel and manipulate the same while costing pennies on the dollar to practice with

WHAT IS IT GOOD FOR?

Aside from the hours of inexpensive fun that rimfire rifles offer for the whole family, there are a couple of great practical uses for those particular .22 guns that provide duplicate looks and function of an AR platform. As previously stated, they make great trainers if you already own or use a centerfire AR. In addition to the cost savings, a rimfire clone is also helpful if you find yourself confined to indoor ranges, many of which won't allow full-power rifle cartridges at all. Since .22LR is permitted on every range we’ve ever seen, your opportunities for effective practice increase accordingly. A red dot, white light, and couple of spare magazines will give you the ability to train everything from low-light to reloads with all the same controls as your service, duty, or defensive carbine

For those with children in the household, these guns are a great way to get them on the range. Some kids will inevitably want to have a gun that looks just like yours. Those interested in competitive shooting can use these guns as a soft intro to two- or threegun action matches. With a good match trigger, the right barrel, and a solid optic, a couple of these guns might make solid starters for the burgeoning PRS Rimfire circuit.

Speaking of optics, in addition to the full market of red dot and magnified tubes available for standard ARs, there are purpose built rimfire options as well. The ones you see here come from Riton USA — a small veteran-owned company producing affordable glass that is assembled offshore and quality-controlled by Americans before final pack/ship. We used their 2-7x rimfire scope, with their quick-detach mount. The mount is pretty standard fare with two locking levers and 30mm rings that include adapters for 1-inch tubes. They also sent us their newest micro red dot. The included mount includes three different height risers, but, if none of those suit your fancy, the hole pattern is compatible with the Aimpoint-Micro-style mount of your choice. 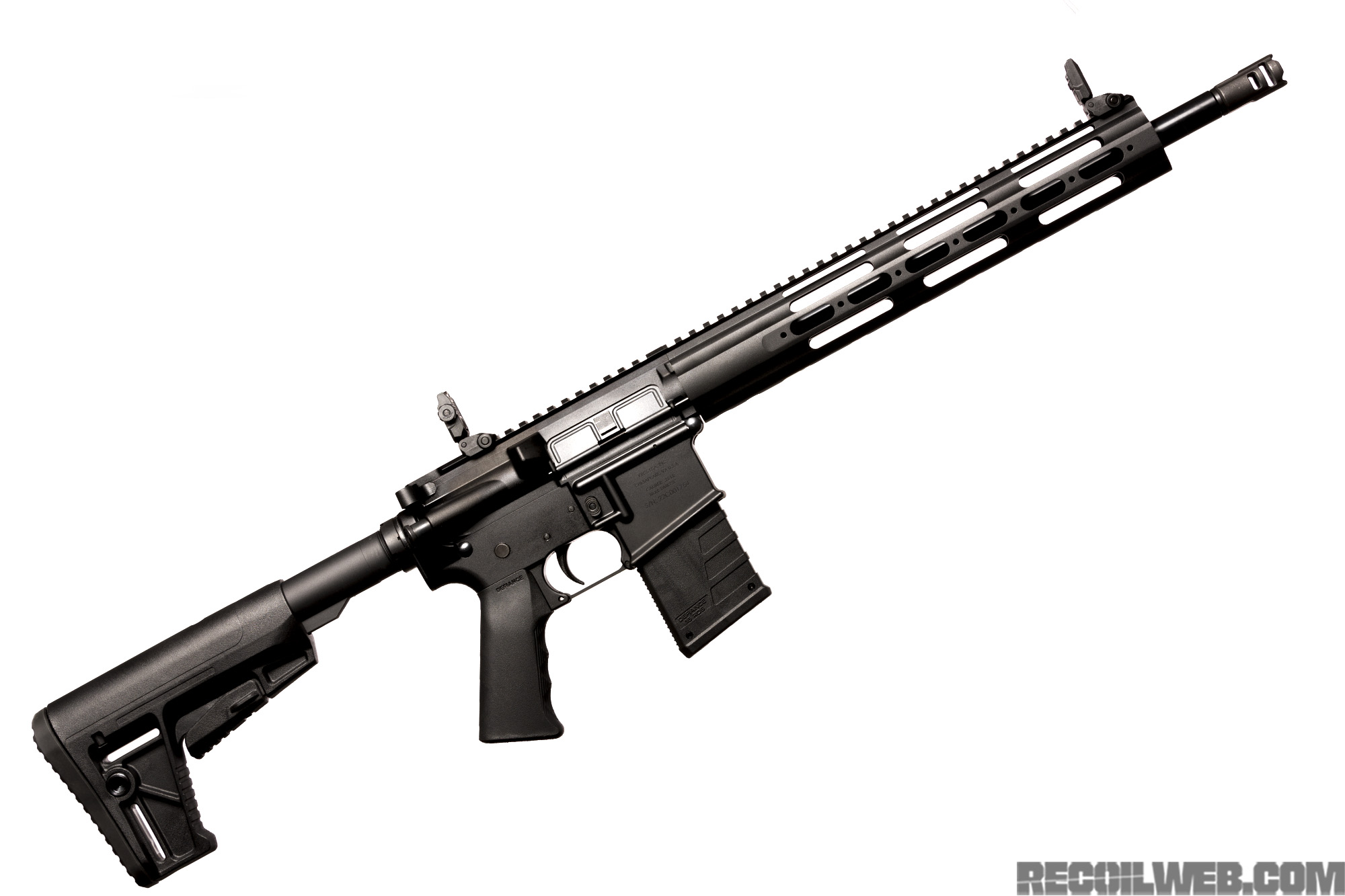 The DMK series brings a couple of really great features to the table. It’s all metal, with an alloy receiver set and handguard. It features a last round bolt-hold-open and a unique barrel adapter that allows you to swap in aftermarket Ruger 10/22 barrels, offering the end user the ability to browse a pre-existing selection of barrels and optimize the rifle for their desired application. The Defiance rifles will also accept most “big boy” AR control parts. Charging handles, trigger packs, safety selectors, and pistol grips can all be transplanted from centerfire counterparts. With this degree of parts commonality, you can pretty much clone your full-power AR for a truly effective training gun or shoot the open-division gun of your dreams for a fraction of the cost. 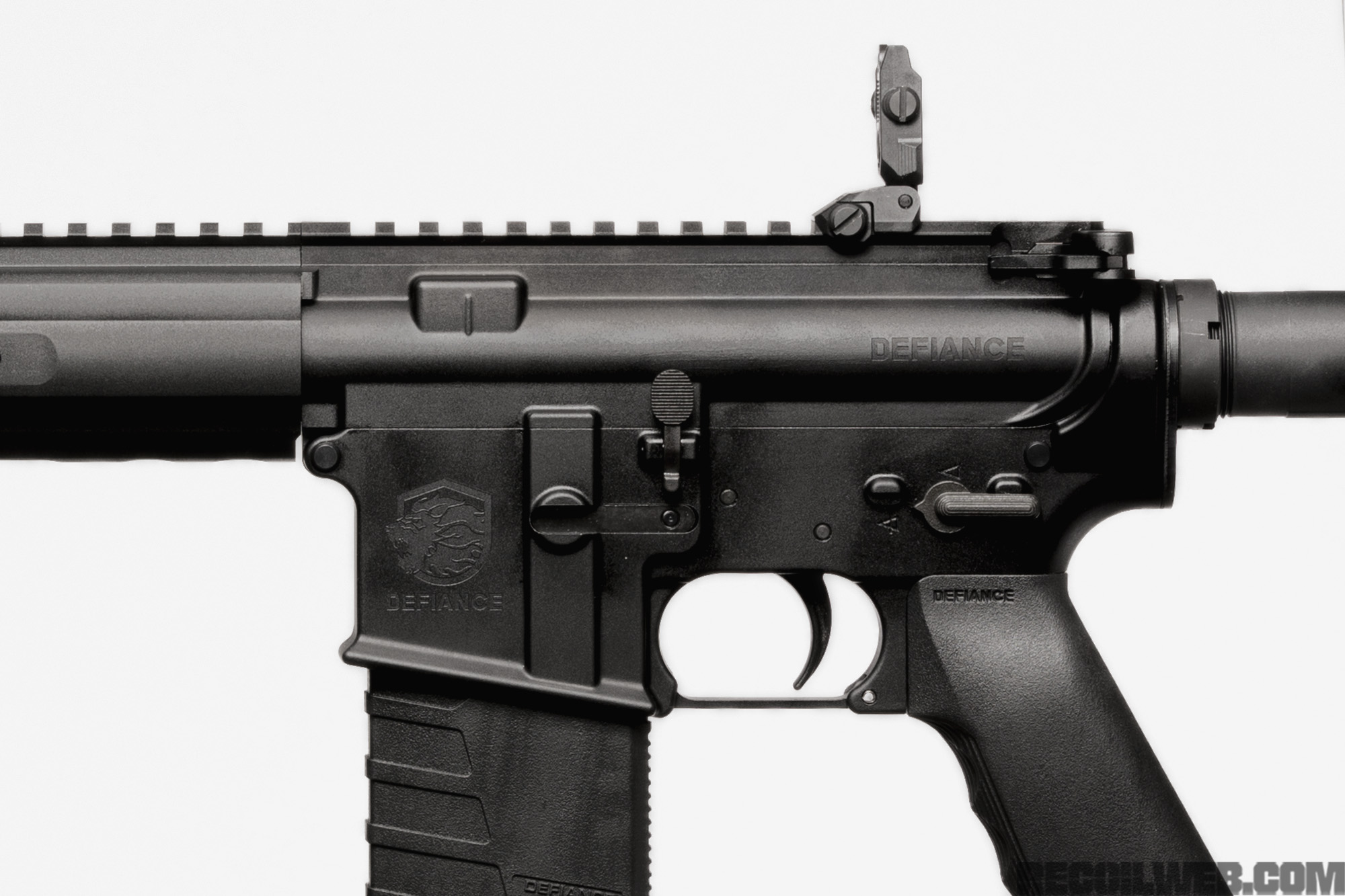 However, that durability and modularity will cost you. Not just in the seven-C-notes MSRP, but also in weight. The DMK22C tips the scales at 6.9 pounds unloaded. Also, while the handguard is modular, it’s a system of screw-in rail sections. After all that effort they sunk into parts compatibility, they skipped entirely over M-LOK and KeyMod handguard options, which would not only have made more sense but saved at least a few ounces. This left us scratching our heads. Our second sampling from KRISS is modeled after the now-defunct War Sport’s LVOA carbine. For the uninitiated, the LVOA (Low Visibility Operations Application) Carbine was designed for … well, we’re not sure who … but touted a unique handguard/muzzle device combo that supposedly reduced flash signature. Also, you could brace the handguard against a hanging cable or piece of paracord for a hyper cool “crossbow” stabilizing technique. Now all of these dubious features that you probably don’t need are available in a plinking and varmint caliber you’d never use in any of these situations. Having said that, the Defiance LVOA is a pretty good homage to the War Sport legacy. If you already own an LVOA, this would be a great trainer to round out your collection. It also wins our highest accolades for undeniable mall-ninja sex appeal. But once you pick up the Defiance LVOA and start shooting, reality sets in. At first, you’ll be impressed with how well the nearly solid aluminum handguard and 5.56mm compensator eliminate virtually all movement when you fire it. But the value of this will wear off quickly when you realize that it handles with all the grace of a manhole cover. It was by far the heaviest gun we tested at 7.1 pounds, the overwhelming majority of which is in the forend. But if you want an operatoras-f*ck bench rest gun, something to boost your Instagram post engagement, or have a teenage son whose primary shopping criteria is video game cool points, the Defiance LVOA may just be the exact thing you ordered. 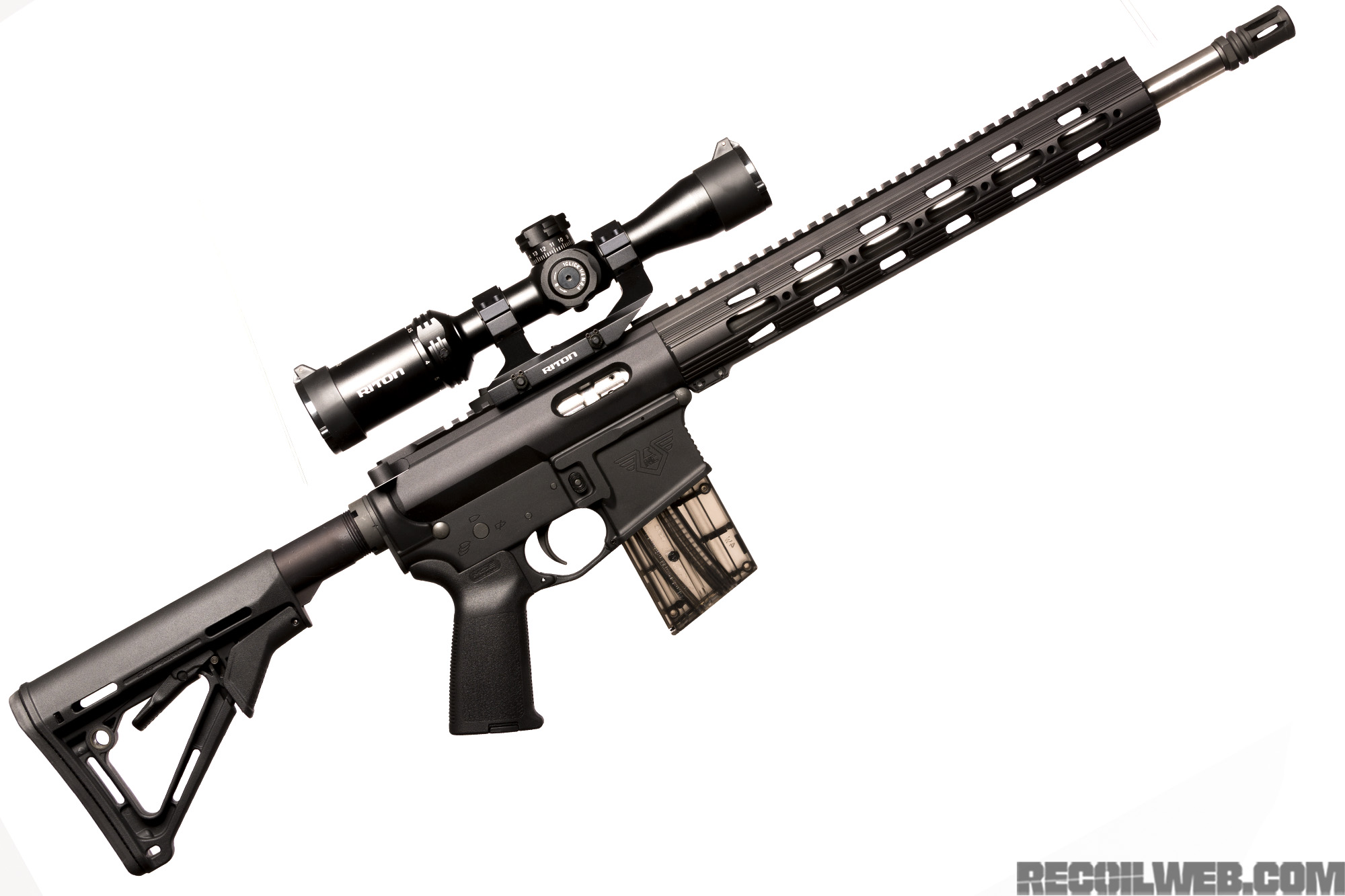 The biggest draw of the NC-22LR may be its match-grade, stainless steel barrel. In addition to the barrel’s borderline bull profile, it’s equipped with a stainless steel bolt and aluminum receiver set/handguard combo. While your Nordic Components rimfire rifle will be able to be passed down for generations, it also weighs just shy of 10 pounds — that’s unloaded, no accessories. The handguard is slender and seemingly ribbed for your pleasure. Like the KRISS rifles, you can screw in short sections of Picatinny rail for accessory mounting — but alas, no direct-mount modular system. If you intend to shoot any kind of rimfire competition, this is the first rifle out of the pack we’d look at. But if you’re looking for a lightweight tactical trainer, you might be better off looking elsewhere in this guide. The M&P 15-22 Sport gets our all-around top pick. While sticker price is $449, you can get them used or on sale in the high $300s, making them accessible to just about anybody. The S&W was also the only sample we tested that had a true M-LOK handguard, allowing you to use all the light mounts, forward grips, sling loops and other assorted goodies that may be rattling around in your garage. It accepts many full-size AR parts, including triggers and safeties. Additionally, there are aftermarket adapters that allow you to swap handguards. 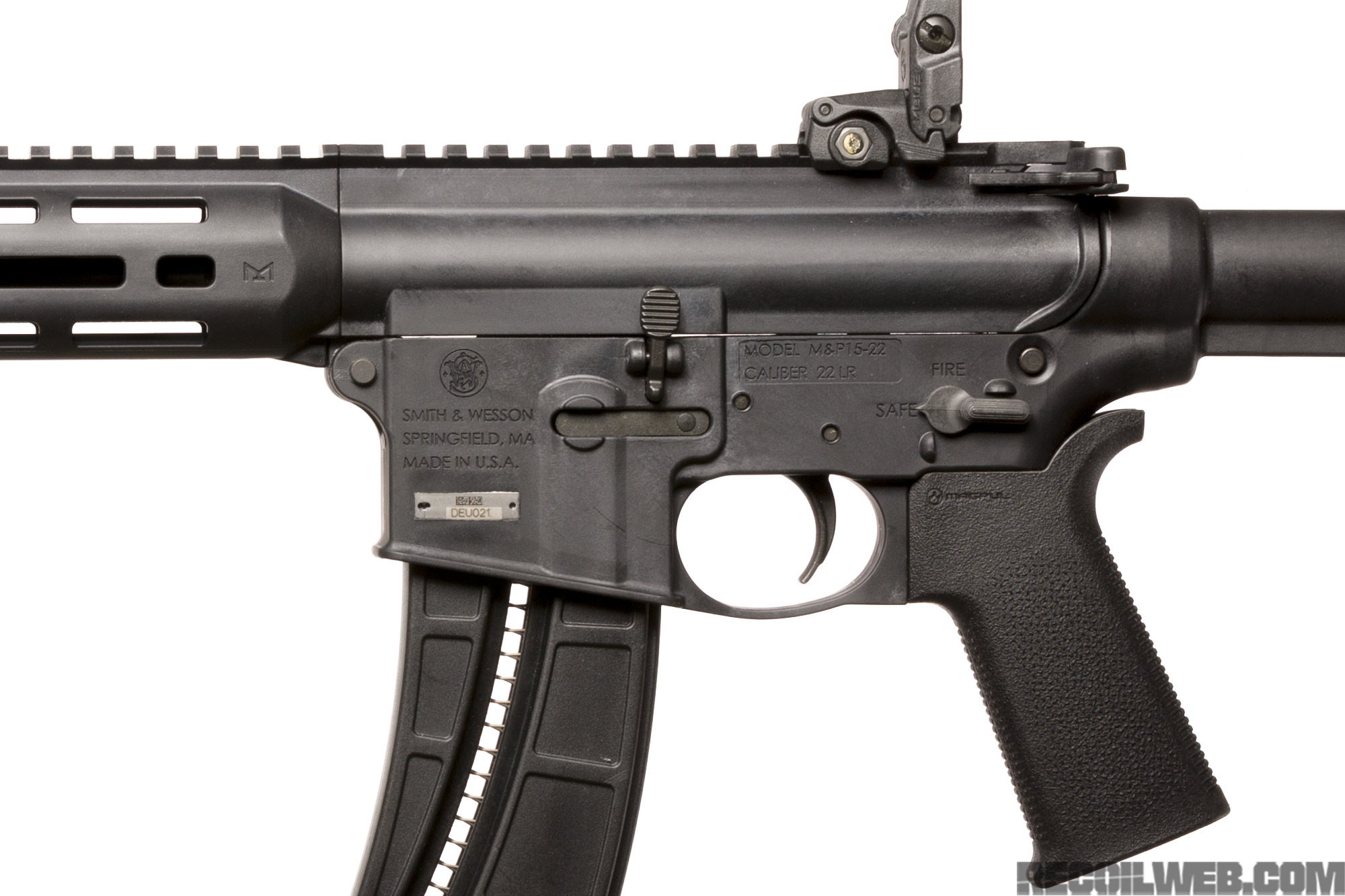 Being of largely polymer construction, the M&P 15-22 doesn’t quite impart the heft of our other sample guns. But it also tips the scale at a sprite 4.8 pounds. It’s fast-handling on the clock, easy to use for junior shooters, and light enough to give you plenty of ounces to play with when bolting on accessories. Standard capacity magazines are cheap and prolific, and fit in most 30-round AR mag pouches. Because of this all-around versatility, budget-friendly market position, and our downright pleasant experience shooting it, the S&W M&P 15-22 Sport gets our top pick of this litter. In the 715T’s defense, it was a rimfire AR clone before rimfire AR clones were cool. Perhaps because it pre-dates the current popularity of tactical plinkers, it lacks much of the refinement of our other entries. The lower receiver is molded as one piece of polymer, which means you can't change grips, triggers, or safety selectors. In fact, the 715T doesn’t even have a safety selector. It has a traditional cross-bolt safety located right where the mag release button should be — absolutely maddening during your first 10 or 12 fumbled reloads. The actual mag release is a weird lever located on the side of the magwell. 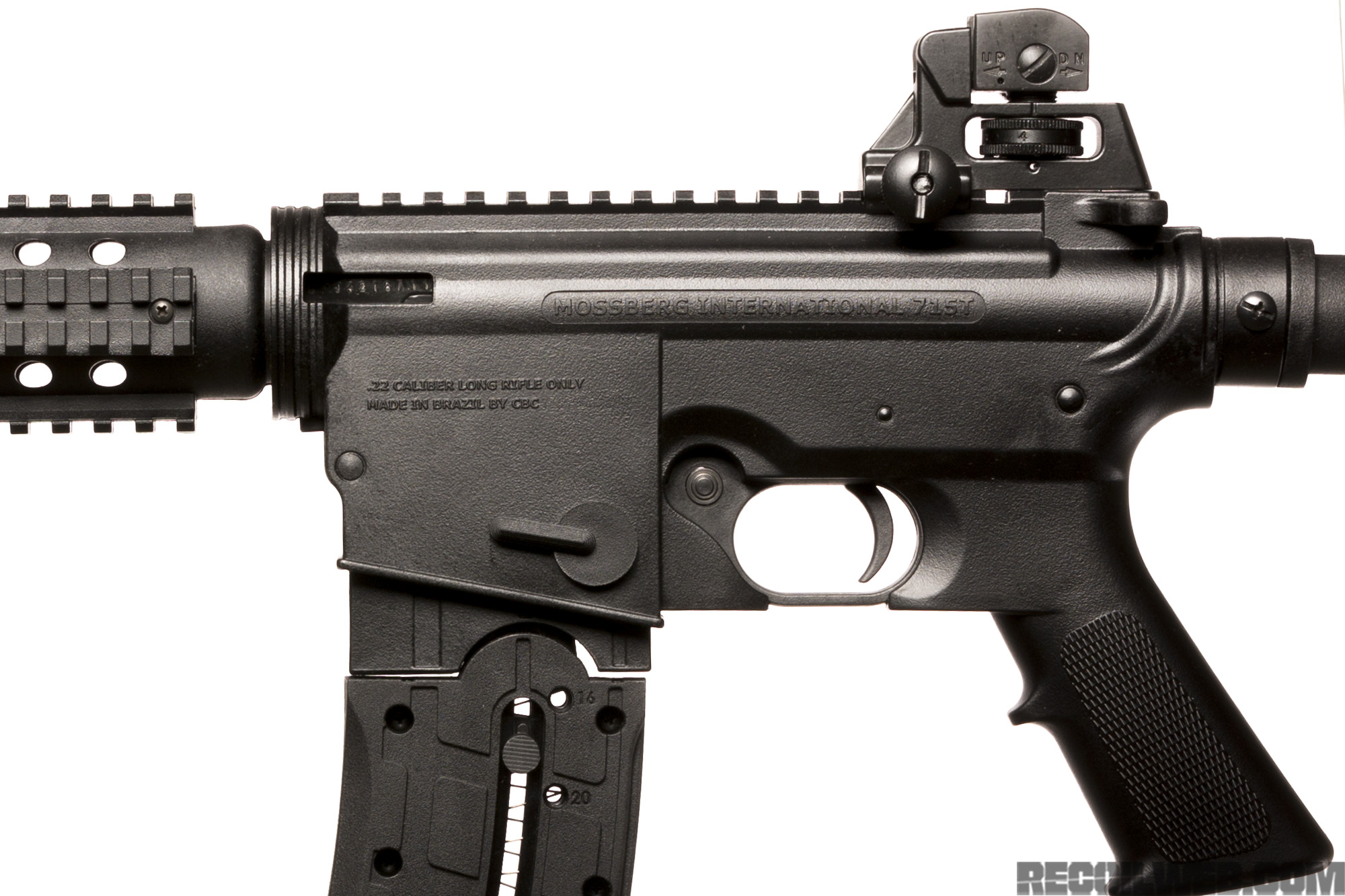 While it does sport Picatinny rails, this is about where your modularity ends. There’s not even an AR charging handle. Instead, this runs as a side-charger with the handle attached directly to the bolt. While we applaud Mossberg for bringing the 715T to market close to a decade before any other major company was allotting time and money to rimfire ARs, it's a product of its era — clunky and only designed to look like an AR without any of the actual benefits of one.