Warning
When handling firearms, always observe safety rules and the precautions set forth in the firearm's owner's guide. Be certain that your firearm is unloaded and made safe before proceeding with this DIY

Though the AK and her variants may be the most prolifically used rifle in the world, in some (alright, many) aspects it can be a bit long in the tooth. About a decade ago, the lower prices of the AK made for a cheap and fun project gun to tinker with in the garage or workshop — and you could do so on a tight budget. This article hearkens back to that time, and though the base models may have increased in cost, the modifications haven't. The goal was to highlight easy projects that gift clear improvements for the modern shooter that also keep the cost as low as possible.

For this article I used a vanilla homebuild pieced together from a Romanian “G” kit. There's absolutely nothing special with this rifle whatsoever, and if you've seen one you've seen them all. 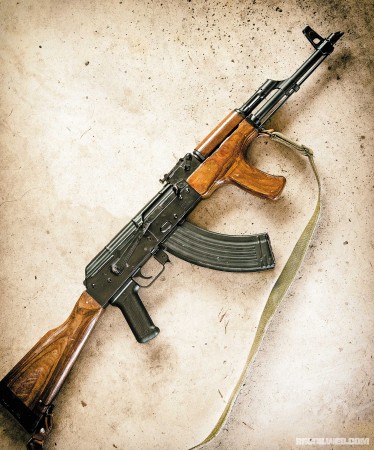 In the true spirit of the Kalashnikov, every one of these mods is robust and readily performed if you're comfortable with common tools. You can do all of them in one go for under $20. If you're not comfortable with tools, each project also has at least one commercially available alternative — some no doubt even featured inside these very pages. None of the projects require permanent modification on irreplaceable parts, and the parts you modify are easy to swap out if you end up hating it or simply dick it up too bad. Almost everything shown can be completed with handtools so you can pretend you're in a cave in the Khyber Pass, though the vaunted Dremel is highly recommend for some.

Whether you're just trying to save a little money, want a fun weekend project, or simply desire to make your rifle a bit easier to rock — this one's for you. So suit up and prepare to do things that will make the purists purple with indignation.

In no particular order …

One issue with standard AK iron sights is that the slot in the rear sight is just too darn tiny. Lining up your front sight within that small notch may be fine at a static slow-fire range, but at close dynamic ranges where speed is key it can be detrimental. While AKs from some nations have wider rear notches than others, all can be improved. Widening the rear slot not only makes for faster target acquisition, it also won't affect accuracy too much — we are talking AK here after all. While you're at it, you can take off some of the sharp corners if you want.

Opening up the rear with a triangle file is easy. Go slow, keep it square, then touch it up with some cold blue, or my favorite: spray paint. Shoot for a notch between 0.135 and 0.145 inch. You shoot, the handguards get hot. Science. While some AK handguards have heat shields, not all of them do. Even if you wear gloves, heat can be an issue. One solution is to make your own cheap heat shield, and all that's required is a can of cheap beer. It's actually important that you go with a cheap brand, because some of the nicer ones have plastic liners on the inside.
Drink the beer. Cut out a handguard-ish section, and shove it into the lower handguard. Some guys like to use epoxy to keep it in place, but I don't bother.

While you're at it, if you have a Romanian donkey dick handguard and you're tired of it mucking up your magazine changes, give it the old chop-chop. Play your cards carefully and you'll have an Afghan AFG. There've been a lot of different ways to mount lights on AKs over the years — from handguard replacements to barrel mounts and more. For this you need a piece of add-on Picatinny rail (I used a polymer Magpul MOE section, because I had one laying around), four large washers, and two longer machine screws of the appropriate pitch for your rail.

Assemble the rail with two washers and a nut on each screw. Remove the top handguard, place a washer on either side of the lower handguard, and reinstall the top rail. Tighten. You may have to make a small relief cut to make the rail even, depending on your handguard and rail placement.

No, you wouldn't want to put a laser on it, but now you can mount any rail-compatible light easily to your rifle. Mounting anything other than a factory carrying strap can be difficult. You have that small front attachment point and further complicating matters the rear attach point is sub-optimal for modern slings.

Make a better front point with 8 inches of 1/16 coated steel cable and a pair of ferrule stops. My cable happened to be ugly green; maybe you'll have better luck. Use the ferrule stops to make a loop with the coated cable, ensuring to remove the plastic that goes inside the stops. Clamp it down. If you want to get fancy, put some heat-shrink tape on it. Loop it through the factory front point and attach your sling. Using two ferrule stops allows for a rigid section that's a perfect place for your sling. There are two ways to take care of the rear mount: You can either remove the buttplate and loop some 550 cord around the top screw and replace the plate, or simply move the rear sling mount from the bottom of the buttstock to the outside-top. If you're doing the latter, ensure that you don't inadvertently screw through the channel for the cleaning kit. There are several beneficial mods you can perform on the AK safety. Many guns, especially ones built from kits in America, feature a full-auto selector. No, it doesn't do anything cool for you like make it go bang faster, and can actually be a hazard. The “auto” portion of the safety pushes against your disconnector and drops the hammer during removal, and sometimes does this even if you just snap it on “safe” too hard. No bueno. Simply contour that tab to match a semi-auto safety and not only will it be easier to remove and reinstall, it's much safer as well.

Unless you're using some very particular models, your AK doesn't have the ability to reliably lock the bolt to the rear. Bust out that Dremel and cut a charging-handle-sized notch in it. Now you can pull the bolt back and sweep up the safety to lock the carrier in place, which is especially handy on ranges that require a bolt locked back when the line is cold. If you have fingers like Les Claypool, the AK safety is probably easy to employ. For those of us with human-sized phalanges it can be a pain in the ass. I used some scrap metal to add a tab to the safety for easy manipulation with the trigger finger. I happened to spot-weld the tab in place, but I've also seen it done with rivets and other forms of welding. Deburr and spray paint when complete. While currently grips on AR-15s are becoming more and more upright and AK-esque, there are some out there that want an AR grip on an AK. While you can buy an adapter, it's not needed for most of them. Obtain your desired grip that doesn't have a high backstrap. Hog out the front and top with a Dremel to match an AK grip. Drill a new grip screw hole, and insert a shorter M6 screw. A2 grips make perfect project grips for this. Remove the nubbin on the front or stipple to your heart's content. The inside will be rough, but no one sees that anyway. No, don't use sandpaper. Just a little polish on the rails and bearing surfaces to smooth it out. You'll be pleased with the results.