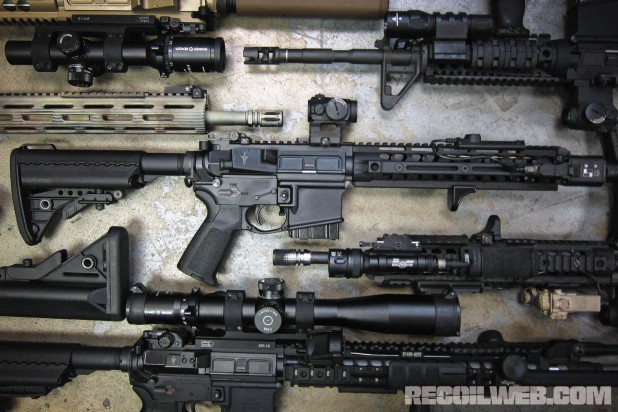 One of the more confusing topics that all AR-15 owners need to learn about is the difference between .223 Remington, 5.56 NATO, and .223 Wylde. It’s not as hard as it might seem, but it can be critical to know, especially if you plan on making your own ammo.

To clear any confusion, we’re talking about chambers. 5.56 NATO, .223 Remington, and .223 Wylde are all chamberings – and they are almost all the same, kind of.

While there is 5.56 NATO cartridge and there is .223 Remington cartridge, there is no such thing as .223 Wylde cartridge (we’ll get to why in a moment).

Externally, 5.56 NATO and .223 Remington ammo have the same dimensions – the difference is in what they are made with as far as powder charge and bullet.

Way back in the mid-1950s, Eugene Stoner and friends worked together to develop the .223 Remington. This was the first chambering for Stoner’s new AR-15 rifle and was the chambering used in the early Colt AR-15 models that saw combat in Vietnam.

The .223 Remington, as designed by Stoner with help from Remington, Winchester, and others, was built as a high-velocity, low-recoil, lightweight military cartridge that could sling a 55gr bullet fast enough to penetrate one side of a steel helmet at 500 yards.

Technically, 5.56 NATO wasn’t adopted by NATO until October 28th, 1980, under STANAG 4172. The development of the NATO version was primarily completed by FN and used a 62gr bullet with a 7gr mild steel tip. This Belgian-made cartridge was SS109 and could penetrate a steel helmet at an impressive 800 meters (874 yards). This dramatically improved the effectiveness of the cartridge designed by Stoner.

For ammo, the differences between .223 Rem and 5.56 NATO really depend on what exact loading you’re looking at. Still, generally speaking, 5.56 NATO is higher pressure, or at least is able to have higher pressure.

Because of military applications like tracer rounds, steel penetrating cores, and other interesting loadings, combined with the likelihood that military ammo made during a time of war might have more variance in manufacturing quality, 5.56 NATO as a chamber is designed for higher max pressure.

While not all 5.56 NATO loadings actually use the higher max pressure, the chamber is designed to handle it. Broadly speaking, this translates to a 5.56 NATO chamber being thousandths of an inch larger in specific places Vs. a .223 Remington chamber.

The downside to that slightly larger chamber is that it is often less accurate than a tighter .223 Remington chamber. For the military, that’s an acceptable sacrifice. For normal people, you might want that extra level of potential precision.

.223 Wylde was developed in the 1990s by Bill Wylde, a gunsmith from Greenup, IL. Simply put, this is a hybrid chamber that splits much of the difference between 5.56 NATO and .223 Rem.

While a little tighter than 5.56 NATO, it’s slightly larger than .223 Remington. As such, it can safely shoot 5.56 NATO ammo but delivers precision closer to .223 Remington.

WHAT IS BEST FOR YOU

Almost all currently produced AR-15s are either 5.56 NATO or .223 Wylde chambers. It’s actually really hard to even find one that is still made in .223 Remington, but they do exist if you look hard enough.

Generally speaking, it won’t really matter what you choose between 5.56 NATO and .223 Wylde.

It’s entirely true that .223 Wylde is a more accurate chamber, but the benefits it gives are normally wasted.

Unless you’re shooting off a bench, you are a good shooter, you’re using high-quality match-grade ammo, and the rest of your rifle is built for precision – you’re not likely to actually see the difference between 5.56 NATO and .223 Wylde chambers.

When you see the difference, it’s unlikely to actually be enough of a difference to really matter outside of putting down tight groups to flex on Instagram with.

That said, if I have the option to get .223 Wylde, I always take it. It’s basically free precision that requires nothing from me. While I might not always be using match-grade ammo, when I do, I want the most out of it.

Wylde chambers used to cost more because they were less common, and barrel makers charged extra. But these days, it’s normally the exact same price as 5.56 NATO, so there really is no reason to pass it up.

But as far as general use rifles and especially general use AR-15s go, .223 Remington really doesn’t have a place anymore.