These AK-47s from Combat Flip Flops (CFF) are terrible shoes. The company does not lie when they say Bad for Running, Worse for Fighting. They really are awful. I'm about to go online and order another pair. I have been wearing my CFF AK47 sandals for over a year now and I have diligently tried to wear them during about every conceivable activity. (The picture above was during a fishing trip on the Illinois River.) They were terrible on the range, in no small part due to the hot brass rolling around and getting between the arch of my foot and the shoe. They were even worse running an obstacle course. God help the silly bastard who tries to wear them while doing parkour.  They are of absolutely no use if you've got a Boerboel mastiff who wants to jog off the trail, might make you miss your connection if you have to hustle across an airport in them and could quite possibly kill you if worn climbing. They are completely useless rucking any distance at all (especially in the mud) and evidently scare away each and every kind of fish. Don't wear them backpacking in rugged terrain and never while angling; they are utterly unsuited for such endeavors.

I've worn them in every sort of weather and once during a tornado. Last fall I wore them when it was cold and rainy and my feet were cold, so I put on toe socks and wore them that way. This helped for just a very few minutes, then my socks got wet and my feet were cold again. I tried again during the winter and to my dismay got the same result – my feet got really cold with the temperature below zero (especially in the snow) and here too my socks got wet. Frankly I'm surprised I didn't get frostbite. Most recently during a heavy rainstorm (we've had many flood warnings this year) I lost one of them to runoff and had to chase it down the street. They're absolutely horrible in the pouring rain. 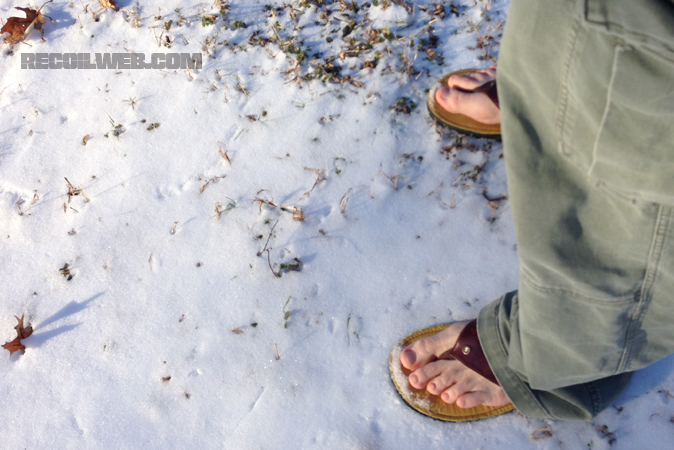 On several occasions I've worn them out and about the “urban sprawl” that is the vast, booming megalopolis of Tulsa, Oklahoma. I wore them to restaurants, wore them waiting in line, wore them crossing the street. On two occasions I wore them walking and running in traffic. I had no issues at all in restaurants and strolling about town but the results of my street crossing experiments were far less than satisfactory. They're clearly unsuited for urban escape and evasion and would be a definite hindrance during MOUT or FIBUA operations. However, they are great on the patio of a bar or on the boardwalk, so we'll call it a tie. My final test involved wearing them during yard work (no socks). I wore them weed-eating, push-mowing, raking and similar tasks. Their performance such activities was (again) less than sterling. My toes and heels turned green (indeed the sandals turned green) and I wound up with poison ivy on my left insole and all over that ankle. Then I cut my big toe with weedeater cord. They performed so badly while stacking hay bales and digging up thistles I actually had to go change into work boots. To add insult to injury they provided no protection whatsoever when either Manda or Reptilicus (I couldn't tell which) slithered out of the Virginia creeper by the woodpile and crawled across my right foot. Combat Flip Flops are awful when doing any labor intensive yard work or dodging enormous, vitriol-spewing reptiles. Now, there were two areas in which Combat Flip Flops truly excelled. The first is durability – they withstood everything and held together despite being worn almost daily, rain or shine, for over a year. The area where they really shined though is that of offspring mortification. Though wearing socks with my CFF AK47s was an ineffective measure, the effort was not an entirely futile one.  As it turns out, the fact that I was wearing in public completely horrified my assorted children, nieces and nephews. It embarrassed them such an extent I felt compelled to continue wearing them that way. In fact I worked very hard to be obvious about it and I still do it to this day – any self-consciousness I feel is more than compensated for by the great embarrassment suffered by my minions.

Interestingly, camels appear to appreciate them. That leaves Combat Flip Flops in a dead heat at 4:4, so I guess you'll just have to decide for yourselves. Before you make your decision, let me tell you a little bit about CFF.

It is a vetrepreneurial company formed by 2 Army Rangers and a designer with the intention of helping to build a no-bullshit sustainable economy in Afghanistan. CFF reckons that one way to contribute to stability on the ground there is with a robust economy and gainfully employed Afghans. That effort has gone sideways for a number of reasons but should hopefully begin again in the near future with the deployment of Expeditionary Production Facilities. Is it a quixotic mission? Probably, but that doesn't make it any less worth supporting.  The entire CFF crew is as passionate about their “business not bullets” ethos as they are about helping veterans. To describe them as merely patriotic would be to damn them with faint praise.

I love my CFF AK47s and I wasn't kidding when I said I was about to buy my 4th pair – I already have one pair for myself and I've purchased one each for Household-6 and my spawn. Are they pricey? Yes, certainly, especially when compared to cheap ass Walmart flip flops or other flimsy sandals. Personally I think they're worth it, and certainly not just because the long term goal will contribute to a less Taliban- and drug-centric Afghanistan. Combat Flip Flops are a long lasting, well built lifestyle brand that happen to have a great underlying mission.

Even if they are bad for fighting and worse for running.

Read about Combat Flip Flops here. If you decide you want a pair of AK47s of your own (or the Tuck-Tucks, that's my next pair), they can be found on the website here. You can learn more about their mission and their other products on their Facebook page here. One response to “A brutally candid look at Combat Flip Flops”