A look at fighting stance, Part I: Samurai, Hoplites and Johannes Liechtenauer 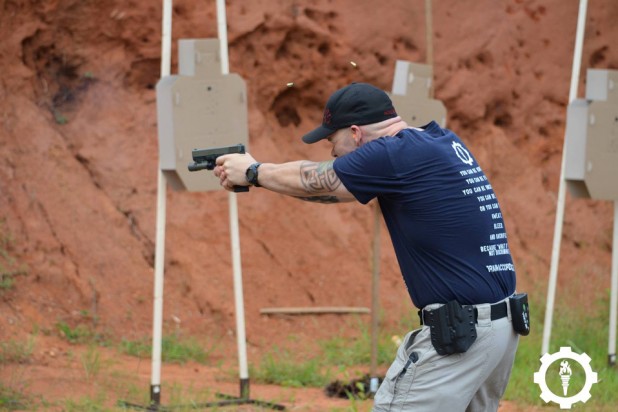 What do the way samurai, hoplites and Johannes Liechtenauer all stood have to do with shooting?

The shooting community agrees on many things when it comes to the fundamentals of marksmanship.  We agree on trigger control technique, the importance of trigger reset, proper sight alignment, proper sight picture and (largely) grip. However, when it comes to shooting stance, there are different schools of thought. Within those schools are other schools favoring minute differences.

Two of those schools are Modified Weaver (MW) and Forward Isosceles (FI).

With FI, the body is squared to the threat, shoulders rolled forward (for some shooters) both arms at full extension, the feet either on line or with one slightly to the rear.  A slight bend at the waist and knees is common.  Often shooters place their weight on the balls of their feet in this position.  The pressure exerted on the firearm in this position comes from the formation of an Isosceles triangle with the arms (hence the name) and with most shooters is an equal amount of force from each arm, stabilizing the weapon well to absorb recoil through the body. I’ve discovered I far prefer Forward Isosceles. After many years of teaching and working in the military, LE, and contracting world, and after extensive research, I have come to this conclusion: Forward Isosceles is the superior stance and it’s the one that evolution intends for us to use whether we want to or not.

As with all things, Caveat Emptor.  This writing is based on my personal and professional experience as well as my own academic research into the subject.  Im not coming along to sell a new way to do things, nor have I dusted off an old one and given it a new name.  I am just pointing out the facts as I see them and have experienced them. Do your research.  Look into the history. Attend training, especially a non-lethal training ammunition based course. See how you react to a spontaneous stress event. If you happen to fall into the small percentage of shooters that will use a MW stance in a use of force, stick with it, if not, it may be time for a change.

Historical record supports my preference explicitly throughout the evolution of combat. FI isn’t just some high speed way to stand and present the weapon  developed by competitive shooters (though they get a lot of the credit for it), it is a natural deep structure reflex we all have lurking in the evolutionary programming of our brain.

Since man first fashioned crude weapons from branches, rocks, and bone, he has squared off to the threat.  He did this to appear larger and to maximize binocular vision should his attacker attempt to flank him.  Squared off to his opponent, he was most able to move in either direction; blading his body would leave one side more favorable for movement than the other.  As civilization developed, the introduction of government allowed for standing armies.  Men could be a professional solider and not have to worry about hunting, gathering, or farming, for that work was done for them by others.  These early warriors developed the fighting arts literally from nothing.  It was combat skill at its inception, and only nature and individual experience of the teacher could be relied upon to lay the foundation for what was to come.  When the first military forces developed the individual combat skills, they looked to nature and what their spear- and club-wielding forebearers had done. They squared off to their threat, one foot to the rear to provide balance and the ability to pivot cleanly in either direction.  They took a reflexive program and built on it.

From the earliest depictions of the Mesopotamian and later Egyptian soldiers carved in stone we can see the body squared to the threat. One foot is to the rear no matter if the solider carried spear or sword.   The development of armor solidified the teachings that evolution had already given us.  Further on, the Shang Dynasty of China, unconnected to the training given to armies in Mesopotamia or Egypt, fielded soldiers using the same stance.  Written records soon became common and we can review many of them today.  The warrior class in feudal Japan developed hundreds of fighting styles for sword and pole arm alike. Those that passed the test of combat were passed on in regimented training. From the Muso Jikiden Eishin-ryu (draw and cut) to Tamiya-ryu style, the Samurai faced his opponent, one foot slightly to the rear.  The famous hoplite soldiers of Ancient Greece, most notably the Spartans, fought the same way. In the 1300s a German swordsman (and master) named Johannes Liechtenauer traveled Europe, learning the way of the sword from all who would teach him.  What he developed from his knowledge would become a standard of sword fighting still consulted to today.  Liechtenauer mastered and instructed four guards; Ochs, Pflug, Alber, and Vom Tag. All begin and end with the swordsman squared to his opponent.

You're asking, So what does this have to do with shooting?

Easy. Everything. We'll start exploring that in part 2. About the Author: Aaron Cowan is the Lead Instructor for Sage Dynamics, a reality-focused firearms and tactics training company that provides practical instruction for the civilian, police, and military professional. Aaron served in the U.S. Army as an infantryman, as a private security contractor overseas, and as a police officer. In addition to patrol, he worked as a SWAT team member, SWAT deputy team commander, SWAT sniper, sniper section leader and in-service police training officer. Aaron holds multiple professional certifications including the National Rifle Association Law Enforcement Division’s instructor training program, California POST-certified academy instructor, Advanced Law Enforcement Rapid Response Training (ALERRT) Active Shooter Response Instructor and Simunitions Scenario Instructor, among others. He welcomes shooters of all backgrounds to his classes as long as they come with an open mind and a will to learn.