Home » Magazine » Issue 47 » Asgard Defense: Something New Under the Sun

Asgard Defense: Something New Under the Sun Many moons ago, SHOT Show felt like a second Christmas. A whole week set aside just to celebrate everything shiny and new in the firearms industry. For those of us able to attend, we remember our first SHOT like our first school dance. But when you make the circuit every year that sense of pilgrimage often fades to a reluctant sort of here we go again … Novelty fades. New releases all sort of run together. Disillusionment creeps in.

But every once in a while a product or company comes along that makes even the most jaded of industry professionals raise their eyebrows and lean a little closer. In this case, it was both a new company and their truly, genuinely new product. Enter Asgard Defense and their reconstruction of the tactical semi-auto shotgun, which they call the M127 Kriger.

Navy veteran Jeff Costa left active duty in the mid 1980s and began an apprenticeship in the machining trade. His experience in this industry covered many aspects of manufacturing including rapid prototyping, industry model, and aerospace-grade quality control. How does any of that translate into firearms? According to Jeff:

“I’ve always wanted to build a gun. My son shares that same affliction. After selling another business, we obtained our 07 FFL and started down this path. In the past, we manufactured rail systems for other shotgun makers. Over time our rails became more complex, evolving from a simple top rail to an all-encompassing quad rail handguard. At this point we thought about what effect we were having on the shotgun. With all of the extra weight were we transforming it into a crew served weapon, so at that point instead of continuing to modify other companies’ products we decided to create our own shotgun with a modular design that would have the features integrated for the start.”

The result of this innate passion is a project that, after four years, is finally ready to see the light of day. Jeff, his son, and their associates who make up Asgard Defense, are ready to show their labor of love to the world and gave us a unique ability to look under the hood and, of course, test drive this strange new scattergun. The Asgard M127 breaks down quickly, into a handful of primary operating components.

AT ITS CORE
The M127 is a semi-automatic, short stroke, dual piston design. It’s fed from a traditional underbarrel tube. Asgard says that while they understand the capacity limits of the tube magazine, none of the currently available options for 12-gauge box magazine offered reliability that was up to their standard. Modularity and ruggedness were prioritized in every possible facet of design. The Kriger comes with a Picatinny top rail for optics. The handguard design we saw was drilled and tapped for screw-in rail segments, but an M-LOK update is already in the works.

Many of the internal components are nickel-Teflon coated for wear resistance and dry lubricity. The upper and lower receivers are 7075 aluminum, and the barrel is 4140 steel, threaded for Trulock choke tubes. Factory iron sights are Picatinny ghost ring style, but red-dots are the easy and implied answer. Lights and even vertical grips can be added as well, thanks to the lack of reciprocating front end. The charging handle is a small, folding piece on the left side of the receiver more akin to a SCAR or FAL than anything that throws buckshot.

The vast majority of the gun is produced in-house, right down to the derlin followers in the mag tubes. This allows Asgard to institute design changes at warp speed while maintaining aerospace-level tolerance controls throughout the continuous design/redesign cycle of preproduction refinement.
With some of the basics established, let’s get into the nitty gritty of what makes the Kriger special … For those who don’t care to get tangled up in NFA nonsense, the M127 will also be available with a pistol brace.

VARIANTS AND AVAILABILITY
One of the key points of innovation on the M127 is its quick-change modularity. The entire upper receiver can be removed and swapped just like on an AR — pop out the two captured pins, pull one upper off and put another on. During our time at Asgard headquarters, we got the chance to play with three preproduction samples. Their flagship model is a 12.25-inch version that’ll be available as either a short-barreled shotgun (SBS) or a non-NFA firearm with pistol brace. The latter has an overall length of 32 inches, brace collapsed, and 34 5/8 inches with brace extended. Asgard says this qualifies it as a “firearm” under the arbitrary ATF measuring standards that require a minimum 26-inch OAL to dodge the “short-barreled” shackle.

They also have prototypes in 15- and 18-inch configurations. The shorty holds four rounds in the tube, but can be ghost loaded for a total of 5+1. The 15-inch upper holds 5+2, and the 18-inch upper 6+2. All of those numbers are for 3-inch shells. If running 2.75-inch shells, add one more to each. Another key feature of the Kriger series is the use of modified AR buffers and springs in the rear end. They’ve spent years playing mix-and-match to come up with the best combinations for each length that will cycle reliably while reducing recoil to the greatest extent possible. The black rifle community has been leveraging this ability for years, and there are currently N+1 possible combinations of buffer weights and spring ratings that allow individual shooters to finely tune their AR for varying barrel lengths, gas systems, and ammunition types. The folks at Asgard Defense realized this potential and put it to work on a 12-gauge. As an example, the 12.25-inch SBS we shot uses an AR-10 carbine spring with a 3.4-ounce buffer.

It should be noted that the three upper lengths we tested were each set up as a complete firearm, as the spring/buffer combos vary for each length, and the two longer systems are still being tested with different arrangements. In practical use, swapping the upper will also require changing the buffer and spring out of the rear end. Asgard says that, once their R&D is complete, upper “kits” will be made available with the appropriate spring and buffer accompanying each receiver. The 12.25 model will come standard with TruLock’s Tactical Choke, which includes ports to reduce muzzle rise and a crenelated muzzle, which doubles as a standoff device for actual breaching use. The charging handle is both folding and non-reciprocating, ensuring it’s out of your way until you need it.

ROUNDS DOWNRANGE
The million-dollar question is, of course, “How does it shoot?” The use of an AR-pattern buffer system definitely dampens the blow, and we were able to put several hundred rounds through the M127 in a single afternoon without needing shoulder surgery, or even an ice pack at the end of it all. We had a chance to run all three variants of the Kriger – 12.25-, 15- and 18-inch uppers. Our experience with the three, as a whole, gave us a couple of surprises. After seeing the three different length uppers, we pretty much assumed that the shorter barrels would have more felt recoil. We were pleasantly proven wrong, and spent more time with the 12.5 version than any other gun. There’s no shortage of solutions out there for reducing the recoil on legacy shotgun designs: buttpads, cushioned shooting jackets, muzzle devices, stocks with built-in hydraulic recoil dampeners … the list goes on. But, without using any of these bolt-ons, Asgard has produced an SBS that runs like a much longer gun, and does so reliably. 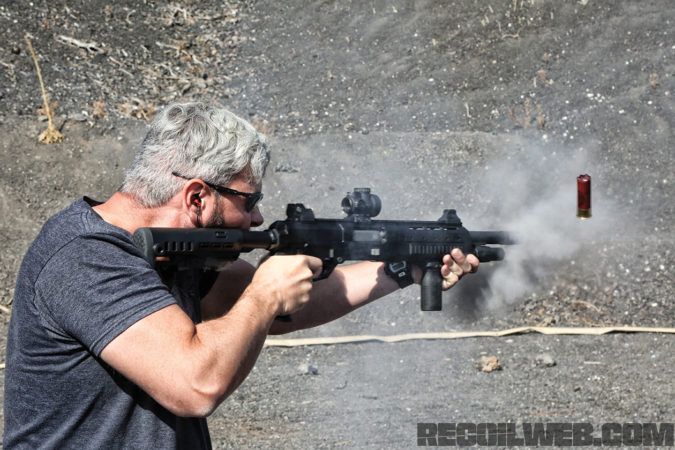 Besides being reliable, the M127 is fast. The trigger is comprised of AR trigger springs with proprietary hard parts, also coated in nickel-Teflon. While this doesn’t allow the drop-in use of AR trigger packs, it does allow them to factory tune the trigger. The pre-production model had a trigger that definitely qualifies as service grade, without feeling cheap or heavy. Their website lists the pull weight as 6.5 pounds. We didn’t have a chance to put a trigger pull gauge on it, but it felt more like 5 pounds to us. There was a little bit of take-up, a hard break, and maybe a millimeter or two of overtravel. The bottom line is, for a factory trigger on a “tactical” shotgun, it’s smooth and quick. The safety selector took a piece of us home. But the issue has already been resolved with a redesign.

We were able to dump all six rounds in less than 1.5 seconds, and ring a 12×12-inch steel plate with every shot. The smooth trigger and well-adjusted recoil system performed well enough that our 5-foot-4-inch female photographer was able to run the gun just as fast as the rest of us, still ringing steel four to five times per run. Not bad for the lady’s second time shooting a shotgun, ever, in her life. After her first six-round mag dump in less than 2 seconds, she pulled her cheek off the stock and said, “I want one.” If this tells us anything, it’s that the M127 Kriger could potentially be the shotgun for people who think they don’t like shotguns.

Our only gripe when shooting the M127 was with the safety selector. The gun we shot was equipped with an ambidextrous selector lever that looks like an AR part, but is in fact, proprietary. During a couple of rapid strings of fire, the right-side lever tore into the top of our trigger finger, leaving a healthy amount of DNA on the lever itself. We gave them some end-user feedback on it, and they’ve already shown us the CAD drawings for a low-profile safety lever to fix the issue — a testament to their aforementioned ability to implement design changes on the fly. The M127 Kriger will, eventually, be available in both short and long barrel configurations, as seen here.

EMPTY SHELLS
We were fortunate enough to get our hands on these guns long before they kick off full-scale production. Their initial offering will be the 12.25-inch model, with a projected ship date of March 30, 2020. By the time you read this, they’ll already be accepting pre-orders. The 18-inch version is slated for release later this year, with the 15-inch coming sometime after that. It should be noted that while some of their parts (trigger, safety, recoil system) mimic AR functionality, they’re modified or manufactured in-house and are not plug-and-play. If you do get your hands on an M127, keep this in mind before you start basement gunsmithing.

We’re excited to see the whole of what Asgard Defense brings to market this year. The M127 Kriger puts some unique twists on the semi-auto shotgun. If you’re at SHOT show, look for them. If you can’t make it to Vegas, stay tuned. We suspect this won’t be the last time we talk about them.