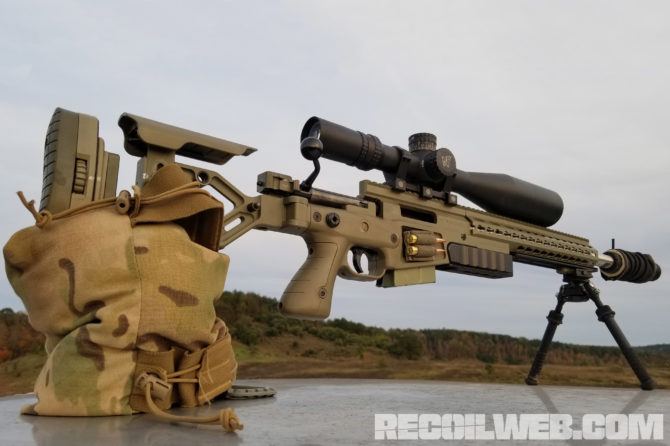 The 6.5 Creedmoor has rapidly established itself as an industry standard for long-range cartridges. When compared to the .308 Winchester, the 6.5 Creedmoor sends a more efficient bullet downrange at higher speeds, with less recoil, at similar cost and works in the same types of rifles. The only downside to the Creedmoor is shorter barrel life, but it still has a several thousand round barrel life when driven hard out of a match rifle, meaning even longer for the casual shooter or hunter.

As with most rifle cartridges, the best velocities are typically obtained out of longer 24 to 26-inch barrels. Greater velocity provides flatter trajectories and less wind deflection with all else being equal. The downsides to a longer barrel length include more difficult portability and maneuverability, while also losing out on muzzle velocity. In confined spaces, long barrels can be difficult to move into firing position. Longer barrels also push the balance point of the rifle further forward when using a suppressor as well as increasing the weight of the rifle. Over the past decade, .308-chambered military and LE rifles have seen barrel lengths trimmed back to a length of 20-inches or less for easier movement and better balance with a suppressor.

The expense for shorter barrels in any chambering is velocity. Going back to the .308 for example, the military M118LR cartridge would normally send a 175gr projectile downrange at approximately 2700 feet-per-second (fps) from a 24-inch barrel, but only 2600 fps from a 20-inch barrel or even 2450 fps out of a 16-inch barrel. The muzzle velocity reduction will see the projectile affected more by wind and increased holdovers to reach targets. This means a shooter has to work harder to connect with targets, especially past 6-800 yards. However, for many applications, this is an acceptable trade-off for the shorter barrel. Given the increasing number of rifles in 6.5 CM, it is only a matter of time until shorter barrels begin to show up on rifles. If a rifle is more effective with a long barrel 6.5 Creedmoor chambering, would the advantage remain with a shorter barrel? I have had many 6.5 Creedmoor rifles, but everything has or had a 22-inch or longer barrel length. To test this out I had a 6.5mm blank from Proof Research chambered in 6.5 Creedmoor to fit my Accuracy International AX rifle, finished at 18-inches.

Installing the barrel was as simple as loosening the Quickloc barrel screw and unscrewing the existing barrel from the action, then threading in the new barrel and torquing the cross bolt to 49 inch-pounds. The muzzle only protrudes two inches past the handguard, keeping the overall length very short. My intention for this barrel was to use it suppressed, so attaching a SilencerCo Omega was as easy as spinning it onto the 5/8×24 muzzle threads. The 18-inch barrel allowed me to attach the suppressor but retain a similar overall length as a 24 to 26-inch barrel without a can.

With the rifle set up, it was time to go to the range. Zeroing went quickly, requiring only a few clicks of elevation and windage from the .308 barrel that came off. Once zeroed, it was time to send bullets across a MagnetoSpeed v3 chronograph to obtain actual velocities. If you’re a long-range shooter and using the number off of the ammo box, you’re just wrong. It’s important to obtain actual muzzle velocities of your ammo and the easiest way is shooting with a chronograph. For the purposes of this project, it would also give me hard data for comparison against other recorded data from longer barrels.

To be a fair test, I felt it was worth comparing light to heavy for caliber projectiles to determine what suffered with the short barrel. I shot a variety of factory and handloads from other barrels with projectiles weighing between 130 and 150 grains. Throughout testing, most loads shot sub-MOA, with most being at 1/2 MOA or a little better. Accuracy overall was on par with other match-quality barrels I've shot and was NOT negatively affected.

Here is a chart of obtained velocities and resulting ballistic data from Applied Ballistics software: Chronograph results for a variety of ammunition loads. 123gr and 150gr are handloads, 130gr is Berger factory ammunition, 140gr and 147gr are Hornady factory loads.

Here is a chart comparing other .308 and 6.5 Creedmoor data from other rifles and barrel lengths:

A comparison of M118LR out of shorter .308 barrels and Hornady 6.5 140gr ELD-M factory ammunition from different barrel lengths.

When looking at other information I had on other longer barrels, there is a loss of about 100-fps when compared to a 22-inch barrel and a 250-fps drop compared to a 26-inch barrel. The velocity degradation is similar whether chopping four inches of barrel off a .308 or 6.5 Creedmoor.

Clearly the 6.5 Creedmoor retains an advantage for hitting targets when comparing shorter barrels. The advantage to a flatter trajectory shows up when engaging targets of unknown or uncertain distances. Having a flatter trajectory can allow a target impact where the slower/less efficient projectile might miss high or low with a bad guess or lase to target. With less wind deflection, this will also allow for a greater hit percentage when trying to make a wind guess, or more importantly if missing a wind speed or direction change.

The final noteworthy comparison is energy on target. Ignoring bullet design, energy on target is a component to terminal ballistics that will affect stopping a living target or how much movement an impact on a steel plate or a miss can produce and be seen at the shooting position. The variables to effect this are velocity, bullet weight and ballistic coefficient. The 6.5mm projectiles are much more ballistically efficient, despite being 20-30% lighter. With shorter barrels, the 6.5s are driven at similar speeds to the .30 caliber options, but the more efficient 6.5s can retain similar energy on target performance.

For a field test, I used the 18-inch 6.5 Creedmoor barrel with Hornady 143gr ELD-X ammunition on a pig hunt with some friends. The shorter rifle was much easier to carry around the woods and when in and out of vehicles. When it came time to drop some bacon, shots were made between 65-75 yards and the 6.5 had no problem stopping wild hogs. Using forward mounted night vision after dark can get make a rifle front heavy as the balance point moves forward. The 18-inch barrel kept the rifle well balanced for scanning and engaging targets when using a tripod, even with a suppressor. Pig hunting under moonlight and with night vision.

If you have a need for a shorter barrel precision rifle, the 6.5 Creedmoor is a viable option. While some velocity is lost with a compact 6.5 Creedmoor barrel, many benefits of the cartridge are retained, especially when compared to other short precision rifles. Should most of your shooting be inside the 1,000-yard barrier, a shorter barrel would still give you an edge and make hitting targets easier and with less recoil than the old .308.