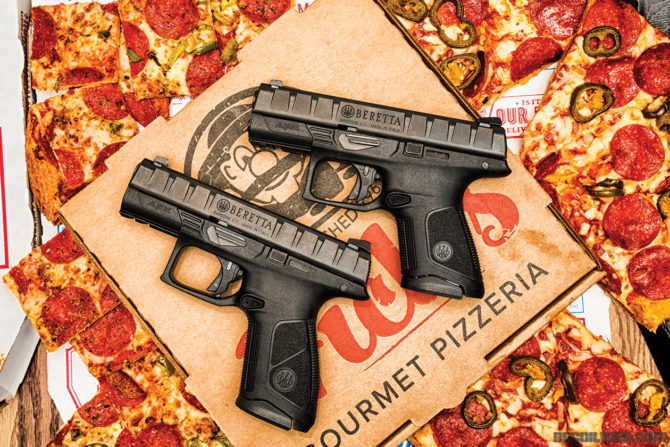 A PAIR OF PIZZA PISTOLS

At the 2018 NRA Annual Meetings, Beretta announced two new options for their APX striker-fired guns: The midsized APX Centurion and the slightly smaller (and, cue uninspired name) APX Compact. These releases are meant to fit somewhere in the Goldilocks zone of “just right” for concealed carriers.

We can’t really proceed without saying that Beretta is a tad late to the game with the release of the smaller APX pistols. While on the whole the shooting community has gained a whole lot of new and awesome plastic fantastics from the DoD Modular Handgun System (MHS) trials, the same benefit has yet to be seen for the companies themselves — outside of SIG SAUER, of course.

We’re probably being a bit unfair by calling them late to the market, as these options were announced slightly more than a year after the duty-sized APX hit the streets. At the same time, other manufacturers definitely beat them to the punch.

Getting Weird With it

The Beretta APX Centurion and APX Compact only differ in terms of the grip size. The Centurion is slightly longer and accepts flush-fit 15-round mags, while the APX Compact can only fit a 13-round magazine seamlessly. The barrel lengths are absolutely identical and easily interchanged.

Fullsize-duty APX slide on a compact frame? Totally doable. Sure, there’s some exposed recoil spring assembly, but that’s it. Want the same ballistic effect a longer barrel gives, but with a stubby slide? Throw a fullsize barrel in a Centurion or Compact. Yup. You can do that too. You can (almost) get as weird as you want. While the fullsize slide fits on the stuffy frame, the reverse isn’t true.

The one mash-up you cannot do is throw a Compact slide on a fullsize frame a la Glock 19X. This isn’t because the barrel lockup is different (it isn’t), but because the recoil spring assembly of the compact just doesn’t quite fit inside the frame. Doubling the problem is that the Centurion/Compact frame is just slightly wider than the fullsize. Regardless, we like seeing a near-universal system (are you reading this, Glock?).

While switching the mag release around for the statistically insignificant left-handed population, we totally broke the mechanism. Normally, if a company is called and we’re told we’re the first to break something, we think it’s a lie. This time around, the uncomfortable pause and the exclamation of “really?!” made us believe it. The story goes that you could put a Marine in a locked room with three ball bearings, 10 minutes later one of the ball bearings would be broken, one of them would be pregnant, and one of them would be missing. Beretta rep Eric Stern reminded of us this parable when we talked about what we broke. Hit the nail on the head. There’s no active retention on the OEM magazine spacers; therefore, just slide out of the way if they aren’t already at the bottom of the magazine body. Something we particularly like is that each spacer has a flare at the bottom to hold the hand in place. They put something else in the envelope as a bonus: a reduced-power striker spring assembly.

For a striker-fired plastic fantastic, the trigger of the APX is pretty good. For 1911 fans, that falls somewhere between a custom-fit light trigger and an old-school USGI trigger that actually works. Call it better than a stock Gen3 Glock and a hair behind the new Gen5. That is to say, totally acceptable. The reduced-power spring reduced trigger weight to just over 4 pounds. While we didn’t have any issues with the APX eating whatever we put through it, the general advice is to not use a reduced power spring for carry — but we’d be lying if we didn’t admit that some of our CCW guns have tricked-out triggers in them.

Whenever we shrink a gun down, we’re going to have some warts and eyesores, and in the case of the smaller Beretta APX frames, it shows the most when it comes to weapon-mounted lights. While the fullsize APX can accommodate any number of WMLs, especially due to the straight trigger guard, the same cannot be said of the shorter-grip models. Unless you just want to rely on spring tension, the Insight is your only option.

SureFire X300U? Out of the question. Actually, we couldn’t find a single SureFire light, including the über-small XC-1/2 that fit the smaller frames. Streamlight fell prey to similar issues. In fact, the only WML tested that worked out of the box was the Insight APS-C. You could get away with a Streamlight TLR-7, provided that you were confident with only screw pressure and no lug. No bueno. Quite frankly, we see this as an incredibly large oversight from Beretta.

Because we’re talking about Beretta, there’s going to be some weirdness going on. We’re not sure if it’s because they’re an Italian company or just operate in Europe, but not everything makes sense immediately. For instance, let’s look at the striker-indicator.

As you pull the trigger of the APX, a small column pokes out from the top of the slide. If you’re a fan (or a hater) of the 92F/M9 series, you’ll probably recognize this feature. As far as we can tell, there’s little or no practical use for this striker indicator. If it was placed on the back of the slide, it could be used to ensure a trigger wasn’t being inadvertently or accidentally pulled while holstering, just like using a Glock “Gadget” or the hammer of an HK P30.

As it stands, to do the same in the current configuration would require the use of three hands and a crazy holstering methodology. If someone has any idea of its actual use, please let us know.

The APX has a striker release so the pistol can be taken down without pulling the trigger. Undoubtedly, this is in reaction to some law enforcement agency concerns about the Glock requiring the trigger to be pulled for a basic takedown. Actually using this feature is cumbersome; it requires you to hold the slide back slightly out of battery, while using a tool to depress the plunger. Really, just ensure it’s clear and pull the trigger in a safe direction. Another nuance of taking down the APX that may seem unconventional to those accustomed to other plastic fantastics is that you don’t lock the slide back to engage the takedown lever. However, if you’re familiar with the M9/92 you’ll be right at home. You simply release the striker, push in the takedown lever from the left, and rotate it down on the right. The slide comes right off. Once again, we’re seeing some of those Italian genetics.

While field stripping and chassis removal is covered in the APX manuals, the same cannot be said of the slide. At the time of this writing, there isn’t a non-LEO APX Armorer’s Course, and Beretta doesn’t consider any of the slide internals to be user-serviceable. So, of course, we took it apart anyway. We’re sure that Beretta HQ has specialized tools and jigs for completely stripping the slide, but we got by with a small flathead screwdriver and a skinny punch. The first few times were awkward, but now we could probably do it sh*thouse drunk in a snowstorm.

Ultimately, the APX is a solid offering among this now-crowded market. We wish the frame were a skosh longer to accept a wider variety of WMLs, but seeing as it’s a chassis system, there’s little reason why Beretta, or even a third party, couldn’t release a new grip with slightly more accessory rail. As time goes on, Beretta has been releasing new parts and pieces through their website, so we’ll be crossing our fingers until then. 2 responses to “Review: The Beretta APX Centurion and Compact”