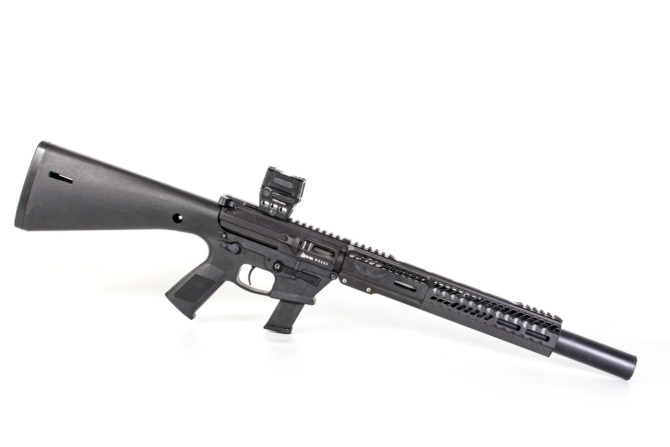 Pistol-caliber carbines have come a long way in the past decade, so in this build we wanted to construct something that would serve as a cost-effective training tool, a decent competition gun, and something that was just downright fun to shoot.

It’s a quintessential parts bin special, pulled together from components we had laying around gathering dust. It wasn’t until we’d bolted everything up that the discovery that one of the parts was no longer available came to light.

The core of the build is a KE Arms polymer 9mm lower, equipped with their DMR trigger and 45-degree selector, coupled with a heavy, 9mm-weight buffer. One of the attributes this lower brings to the table (apart from the considerable weight savings over an aluminum version) is its adjustable, fixed ejector, which is capable of accommodating a wide variety of 9mm bolts from various manufacturers.

This makes tuning the gun much easier, as unlike a 5.56 rifle, there’s no Mil-spec or TDP to work to. Based around the ubiquitous Glock mags, the lower has an ambi mag release and selector, as well as a magwell that Stevie Wonder could find.

In keeping with the cost-effective theme of this build, the KP9 is considerably less expensive than a typical billet aluminum lower receiver, especially when you add in the cost of a decent trigger, pistol grip, stock, and receiver extension.

A 7.5-inch Odin Works 9mm barrel was sourced from Primary Arms, as was an Odin Works slickside upper receiver. We permanently attached a Liberty Suppressors Mystic X can to it, bringing the whole unit up to a legal 16.1 inches, which fits conveniently under an SD handguard from Icarus Precision.

This handguard is no longer available, but they’ve indicated that if enough people pester them, they’ll bring it back — it really is a well-designed and nicely machined unit that’ll accommodate cans up to 1.5 inches OD.

For an optic, we selected a Holosun AEMS reflex red dot, which at almost 500 bucks is definitely stretching the budget, but worth it for the versatility it offers. The entire package weighs in at a very svelte 6 pounds, 6 ounces, and points like a magic wand, balancing just behind the front pivot pin.

Shot at a local steel match, the KP9-based 9mm AR turned in a creditable performance against much more expensive PCCs, proving that its blue-collar design ethos doesn’t hold it back.

Black Friday/ Cyber Monday Deals From Around the Firearms Industry
Carson Hookupz 2.0: Get Photos and Video Through Your Optics
Are you an American Jedi?
Apex Announces New 1911 Hammers