Bullpups are Bullsh*t– Or Are They? 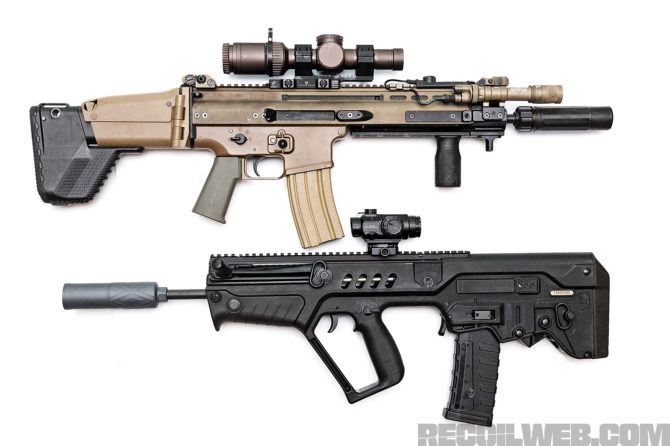 Two Staff Members Get Into a Death Match

This is an argument that has been in the gun community nowhere near as long as .45ACP versus 9mm or AR versus AK, but it’s been just as passionate. Plastic against wood? Nay nay, short-barreled rifles versus bullpups. Even among our editorial staff there’s no consensus. So in this piece, we’ll be pitting the SBR-always advocate, Dave Merrill, against the bullpups-aren’t-bullsh*t advocate, Candice Horner.

Put into simple terms, a bullpup is a rifle that places the main working action (and thus, the magazine) well behind the trigger. While ludicrous upon first blush, there are absolutely some advantages to bullpup rifles. And there are also some unforeseen and unintended consequences. Today, we’ll break it down so you can make a decision for yourself.

No matter how you cut it, a shorter rifle will always be cooler than a longer one. All it takes is a quick look on internet forums, Pinterest, and Instagram to see that SBRs get more love (arguably more love than they should). There’s just something about a short gun, especially one chambered in a rifle caliber, that brings on the likes.

What the SBR brings to the table are optimized ergonomics that the user already knows. They’re easier to suppress, and especially with the modern aftermarket, amazing triggers are no more than a drop-in away.

Admittedly, ammunition selection is curtailed by the use of a short barrel. Where otherwise one could use M193 in a longer barrel, of which a bullpup makes smaller by design, specialty ammunition (all of which costs more than standard) is required for use for defensive purposes lest you just punch .22-caliber holes straight through someone. The rule of thumb is the shorter the barrel, the more choosey one has to be regarding defensive or offensive ammunition use. The bullpup allows for a longer barrel in a shorter package.

Triggers are notoriously horrible when it comes to bullpup rifles. The extra linkages involved make for a terrible trigger. Even the very best bullpup triggers can only be compared to other bullpup triggers; an “excellent” trigger on a bullpup is usually little more than a mediocre trigger on a standard rifle.

Ambidextrous use, sans a few cases such as the FS2000, is limited with most bullpup rifles. That last thing you want is to take a freshly ejected round to the face, and perhaps get your cheek sucked into the action, when you’re shooting a rifle. What’s more, the utility of swapping shoulders in CQB situations has been known for more than a decade and a half, which means that not only lefties are at risk, but anyone who practices modern methodology. Insofar as ergonomics, the magazine swap from under the armpit will always be slower, given equal training, than one in front of the trigger group. Not only does the support hand have to move further, it has to move across the body and possibly weave through slings and other accoutrement. Sure, some people can do it quickly, but then again Jerry Miculek can shoot a f*cking revolver faster than anyone else in the world too.

For those who wish to run silencers, it’s an uphill battle. Normal ejection port noise when shooting a suppressed semi-auto is bad enough; it’s a dozen times worse when the ejection port is literally right under your ear. Once again, there are bullpups that have forward ejection, but they are few and far between. Quiet at the muzzle equals higher back pressure which means more decibels at the port. Because the ejection port is right below the ear, bullpups will always sound louder to the shooter than traditional rifles.

I’ve never met a single person who likes shooting suppressed bullpups. This is absolutely anecdotal, but given the nature of my job, it’s a lot of anecdotes.

Lastly, an easy test is to see what special operations units choose. While military use is certainly not an end-all-be-all, it is telling that every single nation that uses bullpup rifles as mass-issue rifles, has special forces units which do not: While there are more examples, we don’t exactly find the weapons chosen by Estonian special forces particularly noteworthy in either direction.

Consumers want products that are smaller than ever, with performance that exceeds that of their bigger brothers. From cellphones to cars to home assistant systems — we want more without compromise. Bullpups give you everything you need in a battle rifle, but in a smaller package.

Bullpups surely have their faults, but if you consider what they’re intended for, do their faults (or more accurately, your preferences) really matter?

The main benefit of bullpups is that they’ll always have more velocity than an SBR. Thanks to a longer barrel, a bullpup will hands-down outperform an SBR. For comparison’s sake, I velocity tested a Desert Tech MDR chambered in 223 Wylde against a SIG516 using 5.56 M855A1 ammunition. The ammo was selected so that it wasn’t some cherry-picked competition ammo, but rather battle ammo for a battle rifle. The SIG516 has a 10-inch barrel, and the MDR has a 16-inch barrel.

An increased velocity will also make the maximum point blank range farther. If you’re setting your zero to be a point and shoot without coming off target and still be within the kill zone, the velocity of the bullpup will allow that range to be significantly farther.

Another bullpup benefit is that they’re compact. Using the same bullpup and SBR, the MDR is 3.35 inches shorter than the SIG516. This allows for much more capability in the smaller bullpup package.

If you’ve shot an AR, even an SBR, off-hand, you’ll know that the front of the rifle quickly gets heavy. This is because the weight of the rifle and any attached lights or lasers have gravity’s help in pulling the front end down. Whereas with an SBR, the weight is at the back of the rifle, anchored to your shoulder. The front-end weight of a bullpup is non-existent compared to an SBR.

Manufacturers have been capitalizing on the AR aftermarket game so much so that hardly any focus has been put on bullpups. With Desert Tech’s MDR, several advances have been made. For example, the ability to quickly and easily switch the ejection port side without the use of tools. The MDR is truly ambidextrous, and the ejection port design ejects brass forward instead of out to the side.

One side of the argument about current ammunition development is that new ammo could increase the performance of SBRs. Well, if it’s going to improve SBR performance, that same ammo will exponentially increase a bullpup’s lethality.

Buying a bullpup is just as easy as buying any other rifle. You don’t need a tax stamp, you don’t need to pay money to the government, and you don’t have to wait to get the rifle. Bullpups are shorter overall, and yet have longer barrels.

Bullpups are notorious for not being accurate, but just like any other rifle, if you put a good barrel on it, it’ll shoot better. From personal experience, many bullpups shoot around 1.5 MOA, which is well under minute-of-man. So if used for the intended design as a battle rifle, bullpup accuracy is acceptable. People who seek a sub-MOA bullpup don’t want one for short-range, close-quarter combat — they want a unicorn rifle to show off, not a workhorse. Furthermore, military ammunition is designed more for terminal performance than accuracy. This means that the ammo isn’t accurate enough to see the 1.5 MOA dispersion caused by the rifle. Also, most people compare accuracy between a 16-inch-barreled bullpup and an AR with a 16-inch barrel. That comparison is for two different weapon systems with two different intentions. Because of that, I feel a bullpup should be compared to an AR with a closer overall length. I’d be willing to bet money you won’t get a non-cherry-picked SBR with a 7- to 10-inch barrel to shoot more precisely than a 16-inch-barreled bullpup for a 20-round shot string.

If you’re going to kit out your rifle, you might as well have a light and laser. A good SBR has a free-floated rail, which is designed to flex without touching the barrel. When you attach anything to a free-floated rail, you’re literally mounting on a moving piece of the gun. On the other side of the coin, many bullpups have a free-floated monolithic rail that will not move near as much when influenced by a barricade, wall, sling, or something similar. Mounting a laser to a monolithic rail will result in less deviation than a similarly equipped SBR.

Yup, reloading a bullpup for the first time can be like trying to feed yourself with your foot instead of your hand; but it’s a learning curve that can be conquered. The excuse of “bullpups are hard to reload” doesn’t hold water. Any time a new weapon system is introduced to a group, training has to be completed so the shooters can be proficient. After practicing reloads with a bullpup, they’re just as fast as my reloads with an AR. Learning how to reload a bullpup is an issue for lazy people who want to blame incompetence on equipment. Shooting a bullpup from your support side can be done, just not completely. The half-switch (sometimes known as, “paintballing”) involves switching just the buttstock from one shoulder to another without swapping your hands. Some even find it easier in some situations. That said, many bullpups have the ability to switch the ejection port side. This is beneficial for lefties who are tired of living in a right-handed world and shooting ARs that throw hot brass onto their right arm.

A bullpup isn’t for everyone, but it’s damn good at what you’re supposed to use it for. If you want to add one to your gun collection, I don’t think you’ll be disappointed — just as long as you’re using the right tool for the job. It’s not a precision long-range rifle; it’s a compact military-style rifle.