Century Arms AP5 : The Turkish MP5 is Back The story of the Turkish MP5 has all the makings of a Tom Clancy novel. There’s a relationship dating back to the Ottoman and German empires, Cold War geopolitics, ambulance-chasing lawyers, modern-day corruption, and even a trip to a Turkish prison for one of the players involved. Out of that proud history, comes the Century Arms AP5.

If you’re so inclined, its roots can be traced all the way back to 1887, when the first Mausers were delivered to the government in Istanbul from the factory in Spandau. A version of the Gewehr 71, that particular rifle could itself be used as shorthand for the myriad of rebellions, bush wars, proxy conflicts, and global intrigue which abounded during the period of the Great Game — smuggled to participants in the Boer wars, the Irish rebellion, the German Revolution, and the Italo-Ethiopian war. But we digress. Just a few of the aftermarket goodies we were able to try out on the AP5. All of them fit without issue, which indicates the base gun is in spec.

Having previously established a long-standing relationship with the German government, on gaining membership of NATO in 1952 the Turks naturally sought assistance from their old allies in modernizing their armed forces. Assistance came in the form of grants and hardware before the adoption of the G3 service rifle in 1967, produced under license from HK at the Kirkkale plant of the Turkish firm of MKE.

MKE itself was formed in 1950, following a reorganization of the defense industry, and produces a vast array of weapons, ranging from small arms to armored vehicles and artillery shells. When we visited in 2015, the majority of their small arms factory was being converted over to produce the MPT76, the current Turkish service rifle and a near-clone of the HK 716, while a separate building was used to produce various roller-locked guns, up to and including an updated version of the MG42. During our tour of the factory, being nosy bastards, we took a bit of a detour around the presses. There we saw first-hand tooling with HK data plates riveted to them, with an in-service date of 1974. While in the words of the infomercial, the Germans make good stuff, we have to wonder how many hits those dies have made in the almost half-century since they were delivered, and how close they are to the original dimensions.

Century Arms is currently importing the MKE version of the MP5, so let’s cast a beady eye over it. By bringing the guns in as pistols, BS restrictions imposed by 922(r) are avoided, and foreign parts counts made irrelevant. While a full-size MP5 makes for a pretty poor carry gun, we don’t doubt that the majority will wind up being outfitted with braces or SBR’d so that their owners can emulate everyone’s favorite Christmas movie with the Centruy AP5. To this end, the guns come equipped with a cap on the rear of the receiver, rather than a stock. The polymer lower means breaking your master hand grip in order to reach the controls, unless you have simian digits. Magpul’s replacement fits the AP5 and reduces the amount of reach to accommodate normal humans. Muzzle features both tri-lug and 1/2-28 threads.

The rear sight of the Century Arms AP5 consists of the iconic HK four-position diopter drum, adjustable for windage via a Phillips head screw. Elevation adjustment requires use of a specialist HK-specific tool, because they hate you and you suck. The front sight likewise has the tried-and-true ring protector enclosing a replaceable blade, secured by a roll pin. No surprises here, and perfectly serviceable. Included with the gun are a pair of MKE 30-round mags, a cleaning kit, and wonder of wonders, a decent knockoff of a B&T scope base. Although we verified that the irons were zeroed well enough to hit 6-inch steel plates at 50 yards, almost all of our testing was conducted with optical sights.

One of the first things we look for when inspecting an HK clone is weld quality, and in this the Centruy AP5 is workmanlike. The weld securing the cocking tube to the receiver is visible but cleanly executed, and while the receiver to trunnion welds aren’t the best we’ve ever seen, they’re by no means hammered dogsh*t. All metalwork is finished in a semigloss black paint, which is a bit shiny for our tastes but held up in testing, with just a bit of chipping around the magwell. 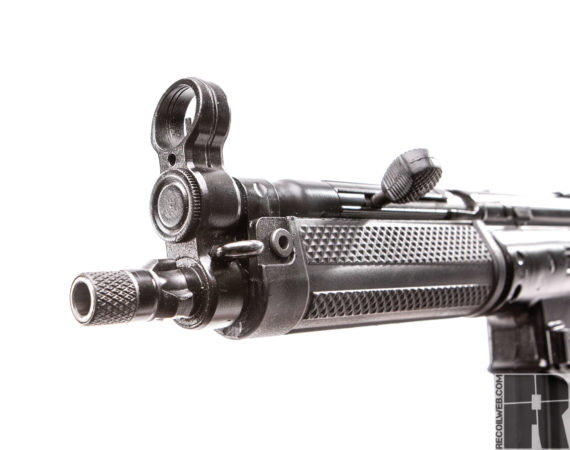 There’s no mistaking that this is a semi-auto version, as the plastic lower receiver lacks the usual S-E-F markings, replaced by a white 0 and a red 1, denoting “safe” and “fire,” respectively. While a third detent position is present, the semi-auto trigger pack won’t let the selector lever rotate past horizontal, which may be a benefit if you ever find yourself in the presence of an inquisitive representative of the law or a pushy range Nazi. Those who have the good fortune to be legal owners of registered sears or trigger packs should note that the Century Arms AP5 doesn’t have a full-auto bolt carrier, so you’ll need to swap that part out in order to rock and roll. And in order to insert it, you’ll need to take a Dremel to the denial bar welded to the rear of the receiver.

Instead of the usual clipped-and-pinned lowers we’ve become accustomed to in the U.S., the Century Arms AP5 uses a front push pin in order to secure the front of the receiver. There’s still a shelf welded to the rear of the magwell to deny the use of a full-auto trigger pack, but the added authenticity of the front pin is a nice touch. In keeping with HK tradition, the selector lever requires E.T.-like digits to manipulate, and the trigger has a long, gritty, and creepy pull, breaking at just shy of 8 pounds. Before the hammer eventually falls, you can feel every surface imperfection in the sear as it stutters out of engagement — treat it like a DA revolver to wring the most out of it. We fortunately had access to a post-sample trigger pack, so with a bit of jiggering were able to get the AP5 running in rock-’n’-roll mode.

Betraying its origins in the decade that taste forgot, the AP5 ships with an old-style, slim handguard, retained by a push pin that passes through a bracket behind the triple tree. It’s a bit of nostalgia we’re not entirely fond of — while it looks cool and authentic, there’s not much real estate for sweaty paws. The good news is that there are inexpensive options out there, and it’s easy to swap out. The AP5 comes well-equipped for suppressor use, as not only does it have the traditional HK tri-lug, but the muzzle is also threaded ½-28 for American cans.

We shot the Century Arms AP5 side by side with a clone built from a German parts kit, by a builder that’s now no longer in production. The older gun benefited from hosting a post-sample trigger pack and had many thousands of rounds through it in both semi- and full-auto; although the overall finish was better than that of the Turkish gun, performance on steel and paper was identical. So long as they’re set up correctly, MP5s and their clones should run just about forever, with the only wear parts being extractor springs — you should get a bushel of them. There were reports of some MKE guns previously imported by Zenith suffering QA issues, which may have been due to bad blood between the importer and manufacturer. Apparently, reporting attempted bribery by the Turkish factory manager doesn’t win you any favors with the home team. Adam Ruola, marketing manager for Century, mentioned that in order to forestall any potential problems, Century Arms has inspectors on the ground in Kirkkale to get eyes on the guns before they leave the country. There’s no doubt that in terms of price and availability, the market for MP5 platform guns is barkingly mad right now. Century Arms realizes this and doesn’t list an MSRP on their website, knowing that whatever price tag dealers apply to them, someone will bite. With very limited domestic competition, this state of affairs will continue until one of the bigger players comes online (looking at you, PSA), or we’ve all burned through our stimmy checks and reality creeps back into firearms commerce. The wild card, of course, is held by traitors and idiots in DC. In the meantime, if you want to play, you gotta pay. The good news is that the AP5 provides a viable starting point for building out the MP5 of your dreams,and should the current administration get their way, current prices will seem like relative bargains in a year or two. 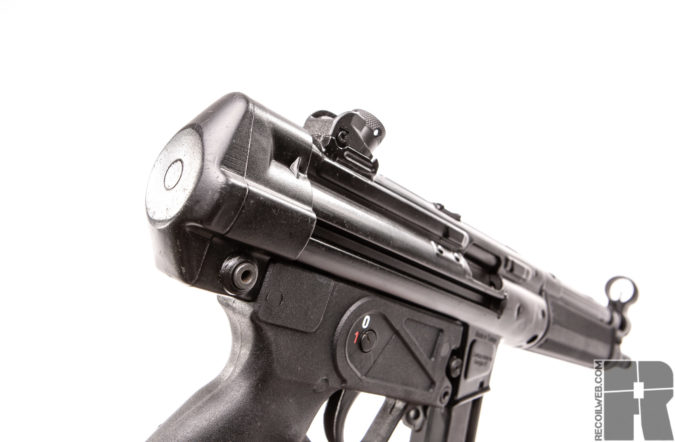