IWA International is a company based out of Miami, FL that specializes in importing unique tactical gear from all around the world. We recently got a chance to play with a couple of their latest releases – civilian-legal flashbang grenades.

Actual flashbangs produced for military and law enforcement use are classified as destructive devices by the ATF and are not available on the commercial market. They typically consist of an explosive charge and fuse mechanism inside a steel or aluminum grenade body. We have seen simulators and training aids available for unrestricted purchase that use shotgun blanks or even CO2 cartridges to create the bang, popular for use in airsoft and paintball matches. 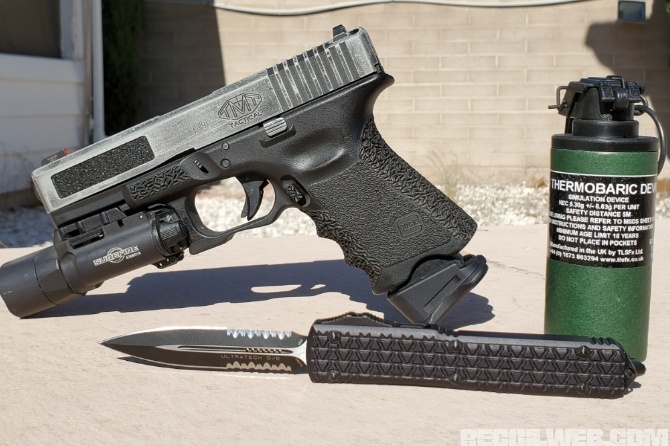 But the IWA bangs are a little different. They consist of a small charge inside a cardboard tube. The design actually reminds us of some of the first-generation concussion grenades that used a similar cardboard or paper body. The IWA grenades are classified as pyrotechnics and are governed by the same restrictions that apply to fireworks. Because of this, shipping is limited to ground-transport only which means only those in the Lower 48 will be able to purchase them, state and local laws notwithstanding.

There are currently three models available from IWA – the M11 multi-burst, the M12 Distraction Device, and the M13 Thermobaric Canister. The M11 gives off a single loud bang followed by two smaller bangs. The M12 is a single charge, and the M13 Thermobaric produces a single loud bang and a “mild overpressure” as described by the folks at IWA. Fortunately, they sent us a couple of each for testing. All three models sport OD green cardboard bodies and pull-ring fuses with a safety spoon that flies free when the safety ring is pulled. Each grenade is individually labeled and, though the bodies look identical, the labels are large and clearly marked so you know what you’re getting when you pull the pin. They are roughly the same size as an actual flashbang and seem to fit in most nylon pouches made for the real deal. There are, of course, some differences between the IWA products and the real thing. The biggest difference is sound output. The products made by DefTec and ALS produce about 175 decibels on detonation. The IWA grenades are rated for 125 decibels. The other major difference is time delay. Tactical-grade flashbangs usually have a 1.5-second delay, while the IWA versions are currently advertised at 2.5 seconds. They tell us they are working on an improved fuse that will bring the delay down to 2 seconds or less.

The folks we spoke to at IWA say that these are meant primarily for training and simulation purposes. Not to mention the obvious f*ck-yeah-factor of getting to toss grenades for whatever special occasion you can come up with. The lower sound output makes them a more akin to a sophisticated M80 than a tool for post-apocalyptic home defense, but we don’t think there’s anything wrong with that. Who needs a reason to set off explosives? All three versions of the IWA flashbang are available for $29.99 each, with bulk pricing available. The photos here will have to hold you over for now but stay tuned to RecoilWeb and RecoilTV for video of our tests of these unique products. In the meantime, check out iwainternationalinc.com and pick up one or two for yourself.