Is the Trend Worth the Trouble?

If we were more cynical, we might say, “If you want to see what's new in the gun industry, look at old gun magazines.” It's true that many trends appear to be cyclical, and one old trend that is new again is the compensated carry pistol. Pinpointing an exact origin regarding pistol devices proved difficult, but we do know that both John Dillinger and Lester “Baby Face” Nelson used fully automatic, compensated 1911s chambered in .38 Super back in the 1930s.

The late 1970s through the 1980s saw a resurgence of compensated carry guns, particularly in 1911 form, and competition shooters have been using them for just as long. And perhaps for the very first time in their company history, Ohio manufacturer Hi-Point Firearms was ahead of the curve by offering compensated carry models as early as the year 2000.

At least partially responsible for the current craze is the increased prevalence of slide-mounted micro red-dot sights. Done right, a compensator will aid the shooter in tracking the dot during recoil and slide reciprocation. If you're considering adding a compensator to your carry gun, or are even just a little curious about it, this piece is for you.

There can be a bit of confusion whenever we start throwing out words like compensator and muzzle brake, and oftentimes they're used interchangeably. The Reader's Digest version is this: Compensators reduce muzzle rise, and muzzle brakes reduce recoil. Most of the devices you see on the market are designed to fulfill both roles to one degree or another. In this piece we'll mostly use the term “comp” or “compensator” even when referencing combination-type devices because it's the current vernacular.

So What About Porting?

A brake or a compensator physically attaches to the end of your muzzle. Back in the dark days of Clinton's Assault Weapons Ban and non-threaded barrels this sometimes meant clumsy methods like set screws. These days, the most common method is with a threaded barrel. Ports, though, are machined into the barrel itself, usually with corresponding relief cuts in a slide to allow for gas to escape.

Both ports and comps exist for the same goal: reduction of recoil and muzzle flip. Since ports are machined into the barrel itself, a ported gun typically reduces the velocity of any ammunition run through it. But they have the added benefit of not increasing the weight or overall length of a pistol. With porting there's some risk of the bullet's jacket being shaved off by a port as it passes through the barrel; we know of at least one federal law enforcement officer who lost some eyesight from being too close to a ported gun when working behind a shield.

There's a bit of confusion regarding these two terms, with at least a sizable chunk of the blame falling like a burning bag of, you know, on Glock's doorstep. In the 1990s when Glock first released ported models of their popular pistols, they added the “C” notation after the model number for “Compensated.” Perhaps it was something lost in translation, maybe “G17P” just didn't sound quite right, or possibly it's a decades' long troll. The world may never know. Compensated Hi-Point —complete with the customary evidence control number written on the slide.

There are several different compensator and brake designs, which is no surprise since they've been utilized in one form or another for more than a century. In their base forms, they're devices that utilize the gas from a fired cartridge to control muzzle movement. Top ports in a device aid in reducing muzzle rise by pushing the muzzle down during recoil. Side ports with corresponding baffles act to counter some of the rearward recoil forces by first pushing the gas against the baffle then exhausting the gas out of the sides of the device.

Added Length
Depending on which comp is used, a great deal of length may be added to your handgun slide. This piece is about carry comps, so we're mostly focused on the smaller end of the spectrum (and if what we saw at SHOT Show 2017 is any indication, there'll soon be many, many more diminutive options available). This may make finding a holster, as well as concealing the gun itself, slightly more difficult. However, given the recent boom in compensator popularity, more options are becoming available regularly. At Night
“You'll ruin your night vision!” is a refrain oft repeated whenever the subject of compensators comes up. Exactly how much flash one gets when shooting during the hours of darkness depends on several factors including ammunition, barrel length, and atmospheric conditions. Furthermore, each compensator will have a unique blast footprint depending on how it's designed.

In conditions where the muzzle flash is so great as to be disorienting to the shooter, there's a more than even chance it's also too dark to properly identify the target without the use of a flashlight or weapon-mounted light. Overall we didn't see much of a difference in total flash, just in the flash patterns itself; remember, these are comps, not flash hiders. When using a compensator at night, we did notice a slight flare in the brightness of a Trijicon RMR set to automatically adjust. 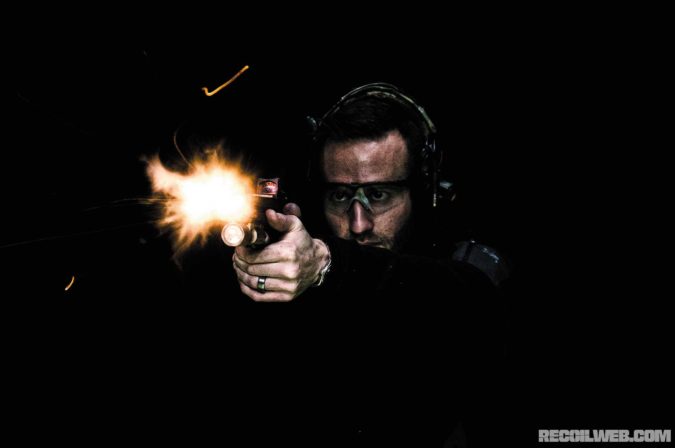 Retention Shooting
Retention shooting is a technique performed when the shooter and adversary are at extremely close distances, perhaps even fighting on the ground. The idea is to keep the handgun close to your body so you can control and maintain possession while you're pumping rounds into your opponent. There are a number of differing methodologies taught by assorted instructors, but they're variations of the same theme. 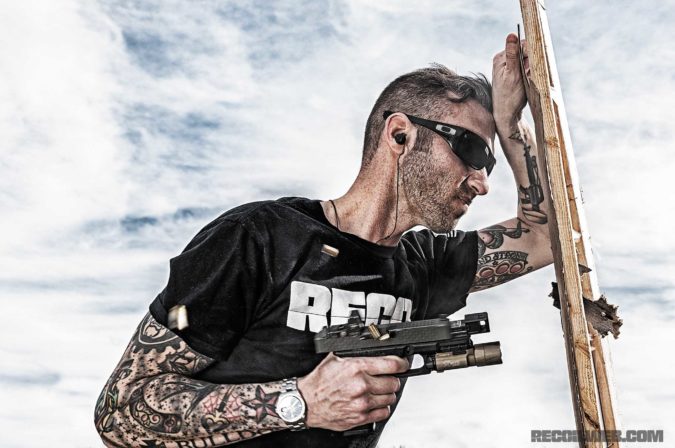 Something we often hear about pistols with comps is that you'll hurt or even kill yourself when shooting from retention, due to the directed gases being in close proximity to your body. So, of course, we had to try it out for ourselves.

First, we obtained a pork shoulder with a large fat layer, then covered it with a T-shirt. A comped Glock 19 was fired physically touching the T-shirt. It blew a hole into the shirt and caused a rather nasty, but shallow, wound in the pork shoulder. You wouldn't be happy if that was your torso, but you probably wouldn't be DRT. Still, there's some potential for injury, especially regarding your eyes. Shooting from various retention methods we managed to rattle our teeth with concussion, but didn't put even a little smudge mark on the eye protection. But this is all on the safety of a home range, and not in the middle of a life-and-death street fight. If it comes to the worst-case scenario, while we'd much rather come out unscathed — most would trade an eye for their life if it came down to it.

Reliability, Fixes, and Insanity
While pistol compensators are relatively new in the “work/carry gun” realm, as previously mentioned competition shooters have been running down this trail for decades in order to squeeze out that next little nugget of performance. If you're carrying with a comp or considering it, you would do well to heed their lessons learned.

The reliability, or lack thereof, of a comped gun depends on your base gun, the design of the device, the ammunition used, and even the weight of the comp itself. Pistols that utilize Browning tilt-barrel actions (a long list, including Glock, M&P, HK, CZ, SIG SAUER, and more) are more prone to malfunction as weight is added to the muzzle itself; that tilting barrel doesn't tilt so well sometimes. Suppressors can cause these same issues, which is why muzzle boosters and linear inertial decouplers were invented.

In order for a compensator to be truly effective, there needs to be a lot of gas going down the pipe. If weaker ammunition is used, not only will the comp not perform as intended, but it may also give you malfunctions such as incomplete cycling due to the additional weight. The first and most obvious step is to lighten your recoil spring assembly (RSA). When using full-power loads, this will increase slide velocity, but it does aid in the functionality of a comped pistol with the inexpensive ammo you picked up in a big box store. As usual, there's no free lunch. For Glocks in particular, a lightened RSA can prevent the gun from fully going into battery, especially if your finger is still pulled back on the trigger.
Here's what's happening: When the trigger is pressed, the striker spring is loaded. Your RSA now has to fight a compressed striker spring in order to fully get into battery. Release the trigger and the slide snaps into place.

This situation is dangerous because it's possible to have an out-of-battery discharge given the right conditions. And it's also annoying because your gun won't always run the way you want it to. So how do you fix this? You lighten your striker spring until it's no longer an issue. If your recoil spring is too light, your Glock may not return to battery while the trigger is pressed. Is there a word that's a combination of dangerous and
annoying?

On the plus side, a lighter striker spring will give you a lighter trigger pull. On the negative side, you may also experience light strikes, especially if you go too light and use so-called “hard primered” ammunition.

And the solution to that is a lightened, extended (or both) striker … I think you can see where we're headed here. If you have a lot of aftermarket parts such as trigger bars and connectors and plungers, you could be polishing this and lubing that, or … you could be chasing this path forever. Welcome to Open Gun Hell and Insanity. Saved By the Bell isn't as '90s as this racegun.

You Can't Have it Both Ways
The more effective a given compensator is at reducing recoil and muzzle flip, the smaller the envelope of reliable ammunition becomes without modifying your internals. This may mean carrying with ammo X and spring assembly Y, while training with ammo Z and spring assembly W. This is similar to what many did with AR-15 buffers and springs when swapping between suppressed and unsuppressed before the advent of adjustable gas blocks, carriers, and other upgrades.

The good news is that many of the new manufacturers of pistol comps both know and understand this. Give up a little performance for a little more reliability. As to your own setup? You won't know unless you try it first — just understand that it isn't always gravy.

A Real Life Black Widow?
Using the Whole Animal
How to use a 22LR for Long-Range Training
RECOIL Issue #25