Make a rule, and the first thing humans are going to do is try to find a way around it. It’s just what we do, and California’s onerous and byzantine gun restrictions are no exception to this basic fact of human nature.

The California gun market is rife with clever workarounds to the ban on scary-looking guns, and they tend to travel one of two different paths.

The first is to remove all the features that the state government has determined to make a gun “assault-y”: No pistol grips, folding or collapsible stocks, flash hiders, et cetera. Doing this allows the gun to retain its detachable magazines and results in some fairly bizarre and awkward-looking firearms.

The second pathway is to have a fixed magazine. Originally, this was defined as magazines that couldn’t be removed without a tool, and the common workaround was the “bullet button”. This being a magazine release that required a tool, such a the nose of a bullet, to depress the magazine release.

The definition was changed to a magazine that couldn’t be removed without breaking open the action. Most solutions currently on the market require the gun to be broken open for loading or unloading, which is terribly awkward.

Enter the CompMag, a first-time exhibitor at SHOT Show this year.

The CompMag is a magazine that is seated in the mag well of an AR or AK pattern rifle and then, with the action open, a hex screw is tightened that wedges the magazine into the well, rendering it non-removable.

There is a slot in the side of the magazine body, similar to that often seen on rimfire pistols, with a knob attached to the magazine follower. Simply pull the knob down to the bottom of the slot and into the detent there, and the magazine is ready to load. To load the magazine, a sliding cover opens on the side opposite the slot and rounds can simply be dropped in, since you’re not having to fight the tension on the follower. Once ten rounds are in, the knob is moved out of its detent and the gun is ready to load and fire. The slot in the mag body also serves as an ammo indicator, with numbered positions along its length.

Best of all, should the shooter leave the state, the magazine can be removed and the weapon is restored to a normally-functioning configuration, with no tools needed other than an Allen wrench. 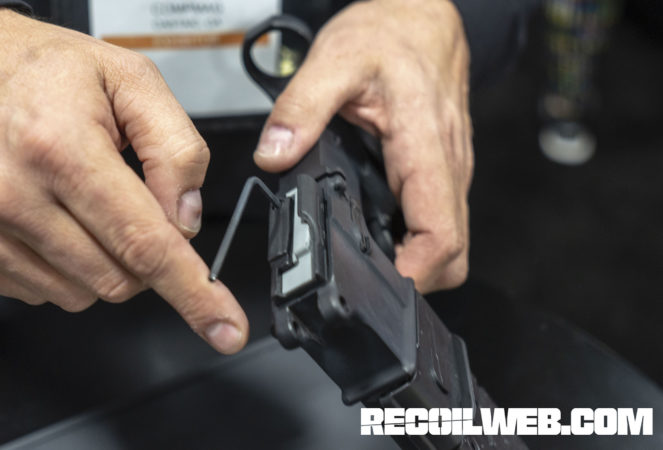 Versions of the CompMag are already in production for the AR and AK, and an AR-10 .308 version is in the works.

Track what is happening in Ferguson in real time
Kammok Unveils SUNDA Tent
Epic Shoot: Some Desert Tech Goodness
Having a Positive Mindset - Words to Live By