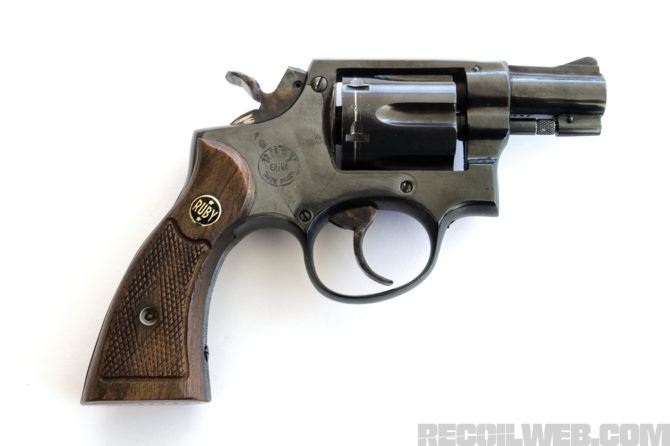 The Spanish have a long tradition of producing firearms in Eibar, located in the Basque region. Depending upon the manufacturer, quality varies widely anywhere from terrible to acceptable. One of the more prominent manufacturers in this region was named Gabilondo, which later became Llama, and one of their gifts to the firearm world was the Ruby series of revolvers.

The Ruby Extra revolver was manufactured from 1955 to 1970 as an “economy line” of Spanish-made revolvers. Essentially, they’re copies of the Smith & Wesson Military and Police revolver models with coiled mainsprings. They were available in 22 LR, 32 S&W, 32 WCF, and 38 Special, and we’ve also seen a few chambered in 357 Magnum.

I snagged this jewel from Cabela’s used gun library in Reno, Nevada, for the princely sum of $95.

The price must be the best part of this deal. I honestly can’t remember the last time I paid this little for a firearm that wasn’t a barreled action, antique nickel-plated suicide special, or non-functional. The finish is blued and probably 80- to 90-percent intact.

As a carry piece, you can do a lot worse. Six-shots of 38 Special is a step above a S&W J-frame, but of course the Ruby is closer in size to the K-frame, bringing a bit of extra weight and bulk. It’ll fit in K-frame holsters, too. The trigger is no pre-lock S&W marvel of engineering, but it’s not atrocious, either. The hammer and trigger are case-hardened, and that has its own appeal.

All things considered, if my life depended on it, I’d be more comfortable packing the Ruby Extra than some cheaply made ZMAK or other pot-metal monstrosity. The Ruby also has merit as a loaner piece or a handgun you might store in a seldom-used cabin or vacation home. If it gets stolen or otherwise disappears, you won’t be out a whole lot of money. More than 20 years ago, I worked in a gun shop where a 4-inch 38 Special (either a S&W Model 10 or 15) was kept under the counter near the register so that in the event of a holdup or other fiasco, any employee, including the owner’s granddaughter, could pick it up and fire it without worrying about excessive recoil.

The most significant issue with any imported firearm that has been out of production for 50 years will be finding replacement parts and aftermarket accessories. Most of the parts offered by online retailers, such as Numrich Arms, represent used takeoff parts from revolvers that became unserviceable. You might get lucky on the various auction sites or a local gun show, but the only other option for replacement parts is to have a gunsmith make a new part from scratch or perhaps modify one from an existing Smith & Wesson part.

Aftermarket grips are hit and miss. You won’t find G10 or even Pachmayr rubber grips for a Ruby. You might find an old pair of Jay Scott, Franzite, or someone who made ill-fitting plastic ones in a mold from an existing pair of grips. We haven’t seen any holsters made specifically for the Ruby Extra, but it appears to fit in most made for the S&W K-frame sized revolvers.

The same goes with speed loaders. If you want to use a hard-bodied speed loader like an HKS, the left grip panel will need to be modified as it’ll get in the way. Bianchi Speed Strips are the best option.

While the cylinder seems robust, the metallurgy used by the manufacturer isn’t exactly clear. As these revolvers were manufactured before the dawn of +P ammunition and marketed as an affordable alternative to Smith & Wesson and Colt offerings, you’d best keep the chamber pressure below 17,000 psi.

The Ruby Extra may not be a Smith & Wesson or Ruger revolver, but it’s not exactly a Mexican mafia throwdown piece, either. While most of their offerings were in the affordable range, the company did make some target-grade revolvers with better triggers, adjustable sights, and ventilated ribbed barrels. Those, however, are very few and far between. Fourth Circuit Court of Appeals Ruling on Assault Weapons
The 7.62 DD5V1 Rifle – Heavy Metal from Daniel Defense
G2RIP Ammunition in the news again - but wait, might be worth the read
5.11 Offers Ugly Holiday Sweater

One response to “Crap Shoot: The Ruby Extra Revolver”