Home » Magazine » CONCEALMENT 15 » Creative Ways to Lock Up Your Guns

Creative Ways to Lock Up Your Guns There Are Creative, Better Ways to Lock ’Em Up

You’ve surely heard the four cardinal rules of gun safety over and over: Always assume the gun is loaded, keep it pointed in a safe direction, keep your finger off the trigger until you’re ready to shoot, and be sure of your target and what’s behind it. Not far behind The Big Four is this: Store your guns so they’re inaccessible to unauthorized persons.

No argument here. It’s generally a pretty smart rule. And once Silas C. Herring began designing and manufacturing what we think of as modern-day fireproof safes in the mid 1800s in New York City, the firearms industry — rightly — began pushing the concept of gun-specific safes. Gradually, the idea that guns should be stored out of reach morphed into the idea that all responsible gun owners should dutifully store their firearms in a big, heavy safe. No questions asked. But these days, well, the idea that gun safes are for everybody is getting some well-deserved pushback. “I will never buy a gun safe again,” said Drake Clark, senior director of sales and business development at Magpul, the firearms accessories manufacturer.

These days, Clark stores his considerable firearm collection in a secure gun room he built into his house. And his aversion to gun safes came the hard way.

It was Valentine’s Day 2011, when he was a single guy. On the road a lot for his job at Magpul, Clark wanted a simple way to confidently secure his guns. It was a no-brainer, he thought, to buy a 24-gun safe the company was getting rid of (they needed a bigger one). He and a buddy decided to move the 750-pound behemoth into his home, and everything was going fine.

“The safe was on a four-wheel dolly, and we were taking the dolly out from underneath the safe when the entire thing fell on me,” Clark said. “My right leg was crossed over my left leg when it fell. I broke my tibia, my fibula, and the inside of my right ankle broke off. All told, I had 18 breaks in my leg.” After waiting a week for the swelling to subside, Clark underwent a grueling surgery in which the doctors briefly considered amputation of his right leg. A dozen screws and two steel plates held his leg together, but it wasn’t until summer that he was able to walk again on his own.

“I learned my lesson,” Clark said. “Even if you’ve moved dozens of those big gun safes before, and even if money is tight — it’s just not worth it to move those things on your own.”

“Since that day, I’ve been done with gun safes. Never again,” he said. “I’ve decided to build something in my home.” BUILD IT AND THEY WILL COME

The open secret in today’s gun safe world is that most commercially available gun safes no longer meet the qualifications to truly be called a safe. The Underwriters Laboratory, the largest independent, not-for-profit testing lab in the world, conducts safety and quality tests on a wide range of products, from fire doors to security cameras. The UL has devised rigid rating standards for numerous products, including safes. But today, many of the gun safes sold commercially are UL rated with an “RSC” certification, short for “Residential Security Container.” True safes have a different rating system, typically referred to as “B-ratings.”

In addition, few modern-day storage options are truly fireproof. Safes are often tagged with classifications like “45-minute fire” or “60-minute fire,” meaning your local fire department’s response rate better be on point if you expect your guns to survive the blaze. The nearly impenetrable, fireproof Herring-style safes, which were the standard for more than a century, have quietly been edged out by these so-called residential security containers that are more accurately described as fire-resistant.

Shawn Wiseman is an avid hunter and shooter based in Tennessee. A retired Army sniper who now runs a firearms training academy, he has grown weary of the myriad shortcomings of commercially available gun safes and has developed another, less technical classification for gun safes.

“They are a pain in the ass, is what they are,” Wiseman said.

Like millions of gun owners who came of age in the 20th century, Wiseman unquestioningly stored his guns in a big, expensive safe. It all seemed to work OK, although not ideally, until his firearm collection began to grow.

“I came to realize the rule of thumb with gun safes was that you took what the manufacturer said was storage capacity and simply cut it in half,” Wiseman said. “That means if you bought a 24-gun safe, you could reasonably expect to only get 12 guns in there.”

Wiseman said he also struggled with the organizational limitations of gun safes.

“It got to the point that I was spending three or four hours just trying to get everything ready to go out for a week of training,” Wiseman said. “I had to have my range bag in one place, my ammo in another, my magazines and hearing protection in yet another. There was no way to simply store all that stuff in one safe.”

Like Clark, Wiseman decided the best alternative to gun safes was to build a secure room in his own home. Clark had a vault installed inside his home, while Wiseman put his handyman skills to work and built his own gun room, complete with a locking safe door. 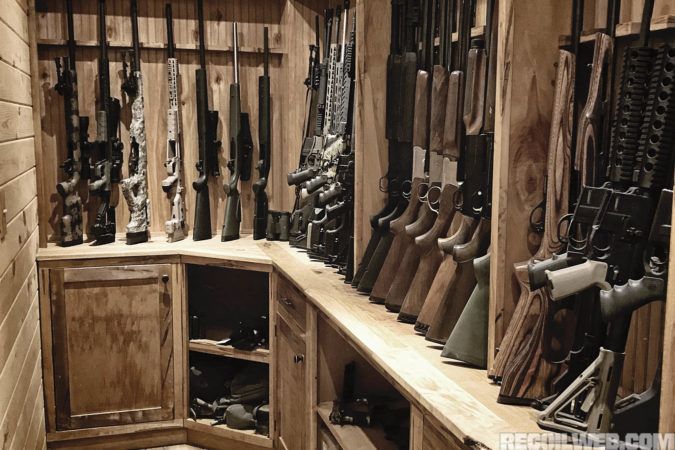 “When I retired from the Army, the house I bought had an unfinished basement,” Wiseman said. “I figured I had enough carpentry know-how to build a room in the basement, with gun racks and cabinets. For me, it was a way to store my guns and gear in one place, where I could organize them and get to them without a huge hassle.”

The most expensive component of Wiseman’s gun room is the vault door he purchased. He estimates, with shipping and installation, he spent close to $3,000 on the door alone. The rest, he said, was relatively inexpensive.

“Not counting my own labor, I built my gun room for less than $5,000,” Wiseman said. For comparison sake, a high-end safe from one of the leading brands selling to consumers begins at about $4,500.

Building their own custom gun storage spaces also brought to light another shortcoming of gun safes for Clark and Wiseman. Namely, size matters.

“Safes were OK for storing standard hunting rifles,” Wiseman said. “But you start putting handguns and AR rifles in there with short barrels, and it quickly became a mess. There was no way a safe was working anymore.”

Admittedly, not everybody has the space, money, carpentry skills, or even the desire to have a designated, built-in gun locker constructed in their house. Some gun owners just want easy options to the expensive, bulky, hard-to-move, and easy-to-stuff gun safes that dominated the gun industry for generations.

Numerous gun owners subscribe to the mantra of Magpul’s Clark, who says, “Obscurity is the best security,” when it comes to thwarting would-be gun thieves in his home. Simply storing firearms in an out-of-the-way place does indeed cut down access to unauthorized persons. But how best to store those firearms? Luckily, there are plenty of pre-made options on the market.

“We started a business in 2012 because we were hearing over and over from guys that they were frustrated with what little gun safes had to offer,” said Brent Howard of Gallow Technologies, a weapon storage rack company based in Utah. “With the various shapes and sizes of guns, safes were just not working for a lot of shooters and collectors.”

Gallow Technologies makes preconfigured gun racks that are easily installed in-home to safely store all kinds of guns — from small handguns to larger target rifles and shotguns for hunting. Howard said Gallow’s best-selling wall-mounted rack system retails for about $700, but many gun owners use rack systems that sell for about half that.

Converting a closet in a spare bedroom for discreet firearm storage using Gallow’s system requires a few common tools and a couple hours. The heart of the system is a set of steel panels hung from bars screwed to wall studs. A Studfinder, level, drill, and screwdriver are all you’ll need for a John Wick-approved setup. Installing a deadbolt on the door will keep the kids out, while adding a heavy-duty door is a solid option. Retrofittable steel vault doors are available from other manufacturers for about $1,000 that’ll further limit access to the goods, but going this far leaves no question in the casual observer’s mind what’s on the other side of the door. And adjacent drywall will need to be heavily reinforced to back up the security of a vault door.

“This segment of the gun industry is growing,” Howard said. “We’re seeing people no longer believing the only safe way to store a gun is in a safe. Whether that means they have a specially designated gun room or they’re making space on a wall, many people have moved past gun safes.”

“It’s kind of weird, but I’ll have people ask me if I might be able to help them move their gun safe,” Clark said. “I always tell them no. There’s no way I’m ever going to touch a damn gun safe again.”