EOTech has introduced their third generation magnifier dubbed the G33.STS (Switch-to-Side). This latest iteration offers a host of upgrades compared to their previous generation, the G23.FTS (Flip-to-Side), including: more compact, lighter weight, greater eye relief, wider field of view, adjustable diopter, external adjustment knobs and a new integrated adjustable tension mount. All of these enhancements sound good on paper, but would they really benefit shooters in the field? We took both magnifiers, along with an AR-15 equipped with an EOTech EXPS 3-0 out to the range to find out.

At first look the G33’s more compact size is obvious, and the weight difference can be slightly felt when you hold both in each hand. When mounted on an AR-15 the weight difference wasn’t as obvious. The G33 weighed in at 11.2-ounces while the older G23 came in at 12.8-ounces. Both were weighed with the included optional riser for lower 1/3 co-witness installed. Another noticeable design change is the lens sizes are reversed. The G23 features a larger objective lens than the ocular, while the G33 has a larger ocular lens than the objective. 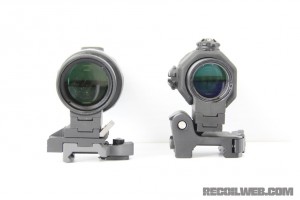 Centering the reticle on the older G23 required a small flathead screwdriver. The G33 features adjustment knobs that can be rotated by hand. The knobs require a firm turn to move, so it doesn’t seem like they will be accidentally changed. You can also use a flat head screwdriver or even a coin to turn the knobs if you need some additional leverage. We were somewhat split on the new adjustment knobs. Some liked the idea of being able to quickly make changes without tools, while some felt once you dial in the magnifier you should be good to go, so why increase the profile and weight with external adjustment knobs. If you’re one who is planning on having one magnifier for multiple rifles you’ll appreciate the adjustment knobs on the G33. One completely new feature on the G33 is an adjustable diopter ring. By rotating the ring around the ocular lens you can adjust focus. The ring is easy to adjust, but not too easy where it will twist on its own.

The A.R.M.S lever mount that comes with the G23 always offered very fast flip to side functionality, but it was also one of the biggest gripes about the G23. The mount lacked virtually any retention when flipped to the side. Many users have been concerned that it could be accidently bumped against something and flip back, partially obscuring a shooters view of their reticle, or even flip all the way in line with their optic giving magnification when not wanted. The mount to rail tension isn’t adjustable either, and on some rails we found it to be an incredibly tight fit and very difficult to get the A.R.M.S lever to release. The G33 on the other hand features a new proprietary mount with adjustable tension, and a similar lever and lock system as the EXPS 3-0 integrated mount. Moving the G33 to the side is completely different than the G23. Instead of pressing a button to move the magnifier out of the way the G33 itself requires a firm push to the left, and another firm push to the right to bring it back in line with your optic. When switched to the side there is ample retention to keep the magnifier out of the way, it would take a very solid hit to bring it back. We setup four steel plates of various sizes at 210 yards and four more setup at 305 yards. Using our EOTech equipped EXPS 3-0 AR-15 we switched back and forth between the G33 and older G23 to engage the plates. The additional eye relief of the G33 wasn’t overly apparent, but the wider field of view (FOV) was. The FOV for the G33 is listed as just one degree greater than the G23, but that one degree goes a long way. We had our spotter call plates randomly for the shooter to engage, and the G33’s larger FOV made it much faster compared to the G23 to find the correct target. All of the changes EOTech has made with their new G33.STS magnifier compared to their older G23.FTS will benefit shooters. The ones we found the most useful in the field were the new switch-to-side mount with its firm retention when the G33 is pushed out of the way, and the wider field of view. We really liked the improved field of view, one RECOIL Staffer likened it to watching a widescreen Blue-Ray on a 60-inch plasma versus a 24-inch tube TV. The EOTech G33.STS is available in black or tan with a suggest retail price of $589, the same MSRP as the G23.FTS had, so you get an improved magnifier for the same amount of money.