Ever since Laugo Arms teased us with photos of the Alien gun, shooting enthusiasts have been yearning for more details. We've got specs and pictures for you that haven't previously been shared to the U.S. market. 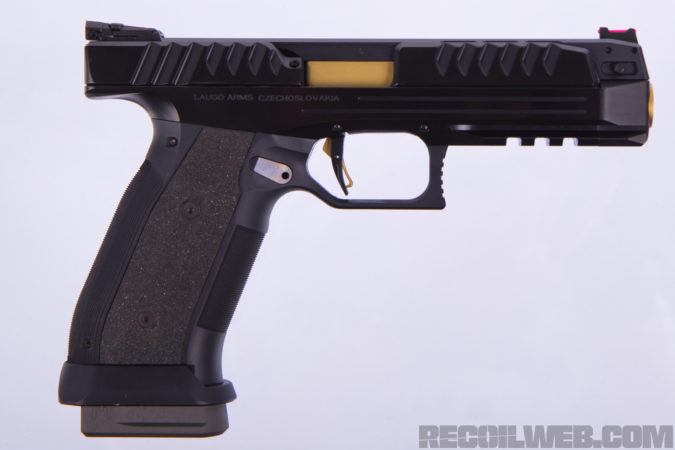 At this time, Laugo still plans to introduce the Alien gun to the U.S. in 2019, but a distributor has not been announced. Engineering designs of the Alien gun serve to mitigate muzzle flip and minimize felt-recoil. Laugo touts the Alien as having the lowest bore axis of any pistol in the world. Cycling of the gun is independent of the fixed barrel and the separate top rail. This means that during each shot, neither the barrel nor the sights move. This should lend to high accuracy and the possibility for faster follow up shots. The Alien gun operates using a delayed blowback system. Gas pressure is used to slow the movement of the slide thanks to a gas piston. Laugo claims that the more powerful the round, the slower the slide will move, and the recoil is reduced no matter how hot the ammo is. 
Alien’s patented hammerless trigger system features an inverted hybrid striker that is attached to the replaceable upper rail. Housing the of the hybrid striker also allows for the low bore axis fit. We'll give you more updates on the Alien gun as soon as we get them.