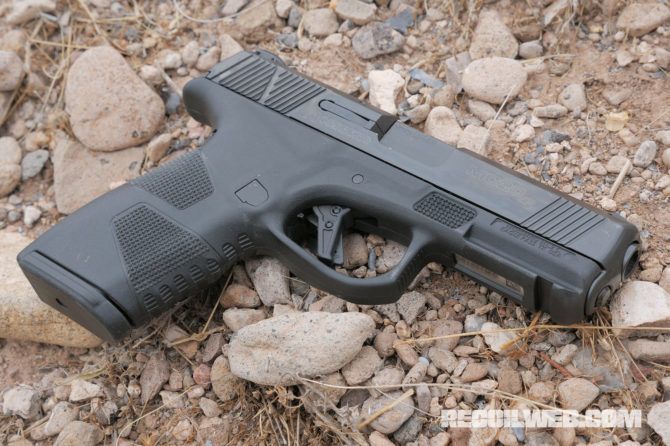 Mossberg has released the MC2c, a new polymer-framed, striker-fired compact 9mm pistol, following on the MC1sc subcompact that it launched a year ago.

The new Mossberg MC2c 9mm pistol is a little bit larger than its little brother and features a double-stack, 13-round, flush-fit magazine. Yet, it’s still just 1.1 inches wide, allowing it to easily disappear in your waistband. With a 3.9 inch barrel, the MC2c is 7.1 inches long and 4.9 inches tall. It weighs 21 ounces. The barrel is stainless steel with a black DLC finish; it's cut-broached with a 1-in-16-inch twist rate.

The MC2c mirrors the aesthetics and comfortable ergonomics of its predecessor. The grip angle on the glass-reinforced polymer frame is more John Browning than Austrian, with a palm swell and aggressive textured panels in key areas on the front strap, sides, and backstrap for a secure grip without shredding skin or clothing while holstered. The trigger has a flat face, and there’s an accessory rail for a weapon mounted light.

The slide is composed of stainless steel with a black DLC or matte stainless finish. It’s serrated in front and rear, with an additional opposing serration in the rear for increased grip no matter how you yank on the slide. It’s topped with either a set of 3-dot sights or optional Truglo night sights. The standard sights are low-profile while the tritium sights have a raked surface on the rear sight that's useful for one-handed manipulation of the slide. The sights are dovetailed, so you can drift them to adjust windage, and compatible with #8 SIG sights — thus plenty of aftermarket options are available.

The magazine release, positioned behind the oversized trigger guard, can be relocated to the right side of the gun for wrong-handed shooters. Mossberg will also offer a version of the handgun with a cross-bolt safety, also reversible for lefties. The cross-bolt safety is intended for buyers who might require it to comply with the laws in their particular jurisdiction or who might prefer it for off-body carry.

While the firing mechanism looks quite familiar, the Mossberg handgun is disassembled without needing to press the trigger to drop the striker. First, ensure the gun is unloaded and the magazine well is empty. Lock the slide back and depress the button on the slide cover. Then remove it from the slide. Ease the slide forward, and the orange striker assembly will protrude from the rear. Yank it out and remove the upper from the pistol.

While the previous MC1sc was designed to be compatible with Glock 43 magazines, Mossberg had to switch to a steel magazine design to achieve its goal of increasing magazine capacity without increasing the width of the gun. Thus, the MC2c has new, proprietary double-stack magazines which hold 13 rounds in flush-fit configuration and 15 rounds with an extended base plate. They’re manufactured by Mecgar. As you’d expect, the floor plates pop off easily for cleaning and the followers are bright red so you don’t miss them.

In the comparison photos below, you can see how the new metal flush-fit magazines compare to the MC1sc’s Glock 43-compatible magazine (the example pictured has an extension). In addition, note the size differential between the MC1sc and the new MC2c.

At Gunsite in Arizona, we put a couple hundred rounds through the new MC2c, completing a variety of drills, competitions, the Scrambler, and shoot houses. The MC2c has excellent ergonomics. It's very comfortable in the hand and easy to control and manipulate. The texturing is effective, though we’d have liked to see additional texturing high on the side of the grip to lock in the support hand.

The trigger on our sample broke at around 5.5 pounds, with a solid, Glock-like feel to it with a short, distinct reset and a slightly gritty pull before the clean break. It was easy to shoot the Mossberg well, and we look forward to doing a DIY trigger job on it.

The gun ran well during our range sessions, with nary a hiccup. The Mossberg MC2c 9mm pistol looks to be an excellent, affordable choice for concealed carry and self-defense. A production gun is on its way, so look for the next issue of Concealment for a full review.

DeSantis is already making holsters for the MC2c; we used an OWB Pegasus paddle holster at Gunsite.

The MC2c will be offered with or without a cross-bolt safety, and with a black DLC or matte stainless steel slide. These variants will all be priced at $490. Truglo Tritium Pro sights are a $105 premium, available with the black slide and sans cross-bolt safety. Street prices, therefore, will be quite affordable. Mossberg hinted that more variants will be forthcoming, such as an optics-ready version.