From Russia With LAV The Soviet Union was responsible for the most iconic and ubiquitous rifle in the world, introducing the Avtomat Kalashnikova in the late 1940s. While the Soviet Union is no more, in Russia, the Kalashnikov Concern carries on the legacy of its namesake.

Earlier this year, Larry Vickers and I traveled to Russia to finish photography for our newest book release in the Vickers Guide series. Our goal was to see not only current small arms offerings in Russia but also to document historic Kalashnikov-type rifles dating back to just after the Second World War. This juxtaposition of old and new would be a theme throughout our entire time in Russia.

Maxim Popenker greeted us when we arrived in Moscow. A native of St. Petersburg (“Peter” to the locals), Maxim created the well-known World Guns website (world.guns.ru), now operating as ModernFirearms.net. Before Wikipedia became such a thorough, albeit error-prone, repository for firearms information, World Guns was often the first destination for Internet searches on guns — frankly it still should be.

Maxim showed us around Moscow, first taking us to the new monument to Mikhail Kalashnikov, the father of the AK-47, in the center of Moscow. Unveiled in September 2017, the monument features a larger-than-life statue to the storied designer and a metal plaque depicting some of his creations. The original plaque included a sculpture of an exploded view of the German MKb42(H), a predecessor of the legendary Sturmgewehr assault rifle. Ostensibly, it had been intended by the uninformed sculptor to be an illustration of an AK-47, yet the mistake highlighted longstanding debate about the Sturmgewehr’s influence on the AK’s development. The erroneous portion was at the edge of the plaque and was subsequently cut off, leaving some visible traces of the original. In fact, the worker doing these “repairs” was initially arrested by local police for defacing a public monument!

Just two hours by plane east of Moscow is the city of Izhevsk. Situated on the Izh River, Izhevsk has been a significant metalworks town since the 1700s. During the Napoleonic era, Izhevsk became an armory city, manufacturing firearms for Russian Imperial troops. Its location fairly deep inside Russian territory has been key to its continued importance as an arms producer for the military, particularly during the Second World War as German troops advanced across the Soviet frontier. The AK-15 was modernized to improve accuracy and options for mounting optics. Note the combined front sight/gas block and tensioned top cover design with an integral rail.

For fans of Russian and Soviet small arms, Izhevsk is notable as the home of one of the three most widely known arsenals in Russia — Izhevsk Machine Engineering Plant, Factory #74, more commonly known as “IZHMASH.” Along with Tula and Molot, the other two members of this trifecta, IZHMASH was a major producer of Kalashnikov rifle variants — notably the original AK-47 rifle and subsequent AK, AKM, AK-74, AK-100 series, and more. Mikhail Kalashnikov lived and worked here once the AK-47 was to be prepared for serial production. An AK-47 “trials gun,” one of the oldest Kalashnikovs in the world. From the initial military trials in 1947 and 1948, it features a combination muzzle brake and front sight.

We photographed some of the oldest Kalashnikovs in existence — AK-47 rifles from the initial military trials in 1947 and 1948. These “trials guns” can be identified by their prototype combination muzzle brake/front sight assembly — discarded before large-scale production began in 1949. Technically, only the original experimental rifles that won army trials in 1947 and the approximately 1,500 rifles produced in Izhevsk in 1948 for military field trials are properly designated “AK-47” rifles. What Americans typically refer to as the “Type 1, 2, or 3 AK-47” is simply designated “Avtomat Kalashnikova” (or “AK”) in official Soviet documents.

IZHMASH is essentially a city within a city, completely encompassing numerous blocks with rows of factories — some old, some quite modern. It operates today under new ownership and under the “Kalashnikov Concern” brand. Kalashnikov Concern initiated a multiyear modernization program to improve profitability, streamline production, and upgrade product offerings. While they continue to produce some of the legacy IZHMASH products, they’ve launched numerous exciting new ones. The AK-12 and AK-15 (5.45x39mm and 7.62x39mm, respectively) modernized Kalashnikov-type rifles went through the “Ratnik” trials held by the Russian Army in 2013, as part of a diverse modernization program for soldiers. They’ve been redesigned to improve accuracy and optics mounting options, with a nonremovable gas tube and a removable gas plug for maintenance, combination front sight/gas block (similar to the AK-104), newly designed pistol grip with internal storage, and a new tensioned top cover design with integral rail for optics. Arising out of the AK-12 is the new RPK-16, intended as a RPK-74 replacement. Other interesting products are the SVCh (possible successor to the SVD), SR-1 rifle in 5.56x45mm with counterbalanced recoil system, AM-17 compact rifle with polymer lower in 5.45x39mm, and the compact AMB-17 suppressed rifle with the subsonic 9x39mm cartridge (.300BLK’s Russian cousin). Unfortunately, none are available stateside due to existing sanctions imposed on Kalashnikov Concern by our government in July 2014. Larry Vickers and Maxim Popenker at the Mikhail Kalashnikov monument in Moscow.

Many factors determine what makes any given company successful and for how long, but one couldn’t help but think that Kalashnikov Concern represents the future of firearms development. It’s not just the modern-day successor to Mikhail Kalashnikov’s lineage; during our stay, it felt much like the Apple Inc. of the firearms world. Its headquarters are located in the beautifully renovated Vsevolozhsky Manor, an 18th century building in an upscale neighborhood of Moscow. Interestingly, it’s one of the few wooden structures in Moscow that survived the Fire of 1812 during Napoleon’s occupation. And just next door is the corporate campus of Yandex, Russia’s Google. The Kalashnikov Concern offices are clean and modern with contemporary facilities. Employees are outgoing, charismatic, and warm, with everyone from management to factory workers treating us with great friendliness, kindness, and interest. They know firearms, and they know marketing. In fact, they have a department called “technical marketing,” distinct from traditional marketing. These folks bridge the needs of end users, engineers, and traditional marketers. They’re largely “Alpha” veterans, counterterrorism specialists akin to Delta in the United States, with all the knowledge and skill that you’d expect. At IZHMASH in Izhevsk, in front of a sign commemorating Mikhail Kalashnikov. Photo by Valery Moroz.

Russia should be an obligatory stop on any firearm enthusiast’s pilgrimage list. There are numerous hurdles to overcome, not least the complexities of travel visas and language issues. But the museums are excellent, and you can’t help but come back with a more complete appreciation for the Kalashnikov after walking through Red Square and traveling to an armory city or two outside of Moscow.

Both the Hungarian AMD-65 and Russian AK-203 shown on pages 126 and 128, along with many other historically significant AK variants, are featured in Vickers Guide: Kalashnikov (Volume 1). Authored by Larry Vickers, James Rupley, Ian McCollum, and Rob Stott, the first in this new series focuses on the 7.62x39mm variants of the AK family of rifles, not just from the Soviet Union, but across the globe. The collectible 11×13-inch coffee table book will be available in a Standard Edition ($95), Signature Edition ($125), and Limited Edition Premium Version ($200) signed with a personal message, limited to 250 copies.

Hungary was part of the Warsaw Pact until 1991, and in a world full of similar-looking AK variants, the Hungarian AMD-65 definitely stands out. It not only features the distinctively Hungarian-shaped pistol grip, it has two of them, plus a unique side-folding stock, sheetmetal front handguard, short barrel, and massive muzzle brake. 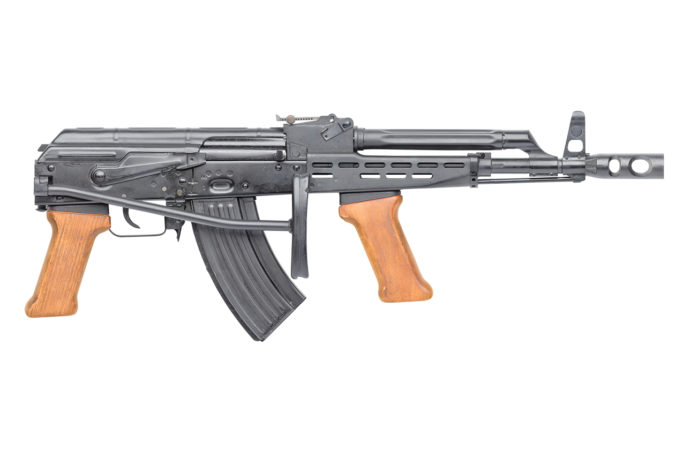 The AMD-65 stems from mechanized troops’ difficulty carrying and using the full-length AKM-63. Vehicle crews, airborne troops, helicopter crews, and infantry in armored personnel carriers found the length of the standard rifle inconvenient. Designed by Károly Zala, the first prototypes were made in 1965, with serial production starting in 1967. The AMD-65 featured a 12.6-inch barrel and an austere side-folding stock. A large muzzle brake helped with recoil generated by the lightened rifle, though its blast and concussion are substantial. A shortened 20-round magazine was also provided. Special versions with optics rails were produced, and some Hungarian units used it with the Soviet PBS-1 suppressor. While the piston and gas tube were trimmed along with the barrel, the AMD-65 uses a standard AKM bolt carrier, gas block, and front sight tower. This simplified production, avoiding the need for a new combined gas block/sight tower (seen on other short AKs) and minimizing changes to the operating system. It has the vertical front grip often used on other Hungarian AKs, the exact same part as the rear pistol grip, rotated 180 degrees and bolted to the handguard. With no shielding around the gas tube and a perforated sheetmetal lower handguard, the foregrip is essential — the whole assembly becomes quite hot when putting rounds downrange. Although some design choices may have degraded the shooting experience, the AMD-65 was perhaps the first truly compact AK model, predating AKSU-type weapons by many years. For its intended end users, its compactness was more important to daily duty than actual shooting, and the AMD-65 was very successful. It would go on to become the most prolific Hungarian AK variant. It’s widely issued with the Afghan National Army, and large numbers hit civilian markets in Europe and the United States, where their awkward look with a 16-inch barrel made them unpopular compared to other surplus AKs. The AK-200 series was developed as an interim solution between the classic AK-100 series and the new AK-12 and AK-15. The AK-203 is essentially an updated AK-103, itself a 7.62x39mm rifle incorporating several AK-74 features such as its iconic — and very effective — muzzle device and 90-degree gas block. The AK-203 features a traditional AK-style rear sight configuration with an AKS-74U “Krink” style pivoting top cover. This design was specifically incorporated for customers wanting to retain a conventional AK iron-sight picture. At the rear of the top cover is an SVD-inspired pivoting lever. Rotating it counterclockwise allows the top cover to pivot up for access to the receiver internals. Upon reassembly, it also performs a camming function to lock the top cover into a repeatable and secure position, retaining zero for optics. Examining the latest AK offerings and their various prototypes from Kalashnikov Concern, it’s clear that they’ve experimented and spent considerable time and resources developing a pivoting top cover system that achieves the highest degree of optic zero repeatability possible. A side-folding multi-position collapsible buttstock is employed — no surprise as this has become the norm on new assault rifles worldwide. It also has an enhanced safety/selector lever, a much needed and welcomed upgrade for serious AK end-users. Picatinny-type rail surfaces are in all the usual positions, but one concept that has largely failed to gain traction outside of the U.S. is an extended handguard interface. As such, the AK-203’s handguard is traditional length. The pistol grip is a new design, providing better ergonomics and storage inside. The birdcage-style muzzle device shown here is new, yet very similar to a device that Arsenal of Bulgaria and others have been offering for several years. That said, a number of different muzzle devices are currently seen on Kalashnikov Concern products. All these upgrades may not be revolutionary, but they nevertheless enhance the usefulness of the AKM platform for the average end user with no obvious downsides.