Size Matters — Just Not the Way You Think

Back in the dark ages of the 1990s, when Will Smith was still a young comedic actor, Gemtech began working on a special-purpose suppressor. It had to be as small as possible, lightweight, and quiet. A lot of special and one-off items have been made for downed pilot survival kits — the Aurora would become one of them. Getting your grubbies on one of the originals was hard, but now there’s a newer and better one out there: The Gemtech Aurora II.

The first suppressor to be made in-house by new Gemtech parent company Smith & Wesson, these Auroras will actually hit the larger open market.

Better, Faster, Stronger
Several changes and improvements went into the Aurora II. First and most obvious is the exterior sleeve. It’s slotted and then slightly bent in at the middle. This makes gripping the silencer to take it on or off exceedingly easy. Secondly, it’s tandem threaded and bidirectional. Have a 9mm pistol threaded M13.5x1LH? There’s an end for that. Have a 9mm pistol in the preferred thread pattern of the only nation to put a man on the moon, ½x28? There’s an end for that too.

Each end comes complete with internal thread protectors and wrench flats that conveniently fit into an AR armorer’s tool. The internals are a palindrome of wipes and spacers, so it makes zero difference which end of the Aurora II you use.

Less obvious are some of the internal changes of the Aurora II versus the original. Firstly, it uses wipe material that is 85A durometer polyurethane, much tougher than the original 65A material. Secondly, the spacers are now bidirectional. While there were several different versions of the original Aurora, depending on what year it was produced, many had spacers with different openings on either end. The idea was that having the muzzle-end hole slightly larger gave more space for a wipe to cave into as it wore.

After a lot of testing and trial and error, engineers at Gemtech determined that simply having the larger hole on either side actually increased wipe longevity. The change in material and spacer design made for a tougher suppressor. How much? The original Aurora had an anticipated wipe life of 10 rounds when mounted on a service weapon — and the Aurora II: 40.
Did we mention that the Aurora II is small and light? At just 3.3 inches long and a scant over 3 ounces, this can won’t crack any scales. Because it’s so small and light, no booster or Nielsen device is needed even when used with a Browning tilt-action barrel. We don’t care what consenting adults do, but this kind of docking is absolutely not recommended.

Old Technology for Novel Uses
Normally when we think of silencers that use wipes, old Mitch Werbell designs come to mind. Wipes can be made from all manner of materials, so long as it’s pliable enough to allow a projectile to pass through but seals up fast enough to trap the explosive gases behind. Those self-healing targets you throw downrange work much in the same manner.

There are definitely downsides to wipes; they can’t be used very much before replacement, accuracy can get thrown off considerably because the bullet passes through the material, and generally they aren’t as well suited for modern weapons when compared to present-day options.

But of course there’s a but. You can make a silencer exceptionally small with wipes and grease. As mentioned wipes help keep the gas sealed in, and the grease is an ablative media — in other words, a temporary performance enhancer. If you’ve ever heard about a suppressor being run “wet,” that’s in reference to an ablative media being used.

After the Aurora II is packed with grease and fresh wipes, it can be tucked away for years without any worries of leakage or evaporation. 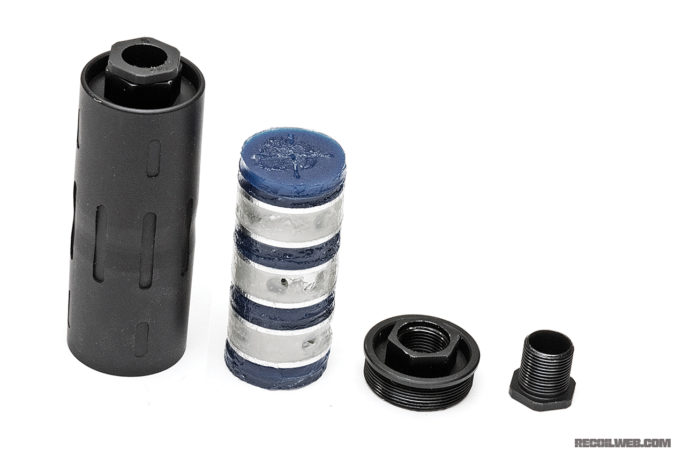 The internals are deceptively simple — and this is the cleanest they’ll ever be.

The Projectile Predicament
While you may think that the Aurora II might make for a nice little nightstand or carry can, you’ll have to pump the brakes here. Because the projectile passes through several wipes and some grease along the way, even with the X-aperture in the wipes themselves, the bullet strikes material on its way down range. This means hollow points or any other expanding ammunition are a no-go. To quote Gemtech, “guaranteed endcap strike.”

Slightly further complicating matters is that only one side of the silencer threads off — if both sides came off, an endcap strike could be a quick fix. While our service men and women the world over largely carry ball ammunition in their pistols, we won’t pretend this is the best possible choice for defensive application. At the Range
Exactly how long the wipes will last in the Aurora II goes far beyond the user manual. Supersonic rounds through a short pistol will wear out wipes faster than subsonic through a duty-sized gun. The more powder you have burning and blasting from the muzzle, the shorter the life span.

The original Gemtech Aurora was designed around subsonic Israeli 158-grain ball ammunition. We can confirm this load works very well, as does Freedom Munition 165-grain HUSH. Ammunition with truncated cone projectiles, like a lot of 147-grain on the market, will reduce the life span of the wipes.

Because we wanted to play with extremes, we used supersonic 124-grain NATO ammunition in a tricked out micro-murder Glock 43, and 165-grain HUSH ammunition out of a Glock 17. Differences were night and day. With a 165-grain from a full-size pistol, we were able to unload a full box of 50  before the wipes gave way — from the G43, about 17 rounds. Even when the centers of the wipes were blown out, there was still some (albeit small) suppressive effect.

While subsonic ammunition can make any silencer sound pretty good, what surprised us about the Aurora II is that it worked exceptionally well with supersonic ammunition too. Once the silencer gets heated up and the grease starts burning off, it can get quite smoky at the range — so definitely ensure you have good ventilation if you’re partaking indoors.

Accuracy was very dependent on the pistol and load as well; remember we’re talking about blowing though a total of an inch of polyurethane after exiting the muzzle. Supersonic ammunition tended to deflect less, but inconsistent wear of the wipes may also have some effect. Loose Rounds
The original Aurora may have been developed for pilot escape and evasion kits, but it soon found roles with other parts of the defense apparatus. It isn’t terribly hard to imagine one of these being employed against a sentry’s skull, making their brain the final baffle. Enough of these went to specific SOCOM units that Gemtech was tasked with providing training on field-expedient improvised insides. They tried everything from cut up Glock-branded stress balls to sheepskin to sleeping pads. Ultimately the original polyurethane was the best, but leather ended up being something of a viable alternative — no huge surprise as many early silencers sported leather wipes. The guts come out charred and smoked to perfection.

Compared to full-size pistol suppressors, the Aurora II is maintenance heavy and has a whole lot of ammunition restrictions. But for the original intended role and other government special uses that came later down the line? Unparalleled. The very best part of the Aurora II isn’t simply the size or how quiet it is, but the fact that you can actually own and use one yourself without crashing an F/A-18.

When the wipes go, the centers are completely removed. If you take off your Aurora and can see through it, it’s time for new guts.

Warning!
The BATFE has notified manufacturers that suppressors and suppressor parts, including suppressor wipes, are federally regulated devices and can only be manufactured by specially licensed firearms manufacturers.

The best suggested practice for replacing the wipes in your Aurora II is to send it in to Gemtech. For $30, they’ll put in brand-new factory wipes, grease it up properly, and send it on back. However, if you’re a type 02/07 Special Occupational Taxpayer (SOT) FFL, you can legally make new wipes without any questions or hassle. Legal stuff aside and without further ado: Notes: OEM Gemtech wipes are water-jet cut. However, these instructions closely follow Gemtech-founder Dr. Phil Dater’s instructions for original Aurora wipes. You also have some options regarding tools and materials. For example, the PU hardness for OEM wipes is 85A, which we found more difficult to source. The 80A is an easy alternative with only slightly reduced longevity.
Additionally, if you already have a 1-inch arch punch (McMaster-Carr # 3427A24) that’ll also work — but you’ll need to use a dowel to press fit. Both sizes are equally as effective. Another optional tool is a sharp ½-inch cold chisel (McMaster-Carr #3575A22) in lieu of a craft knife; while it isn’t more effective, it does look nicer. Neatness doesn’t count terribly much here in regards to performance though.

1. Disassemble the Aurora II. Destroy and dispose of spent wipes. Clean spacers if needed (being a little dirty is no problem). 2. Using your BFH and arch punch, cut eight wipes from your PU. A cutting board makes this job easier and will also keep your punch sharp for a longer period of time. 3. Use your craft knife (or ½-inch cold chisel) to cut an “X” through the center of the wipes. Pair each wipe with another, using a dab of petroleum jelly to stick them together. Each cut “X” should be offset 45 degrees from one another. 4. Pack the outside and inside channels of your spacers with the petroleum jelly. Also apply jelly to the top and bottom of each spacer for the best seal with the wipes. 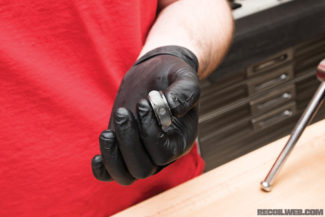