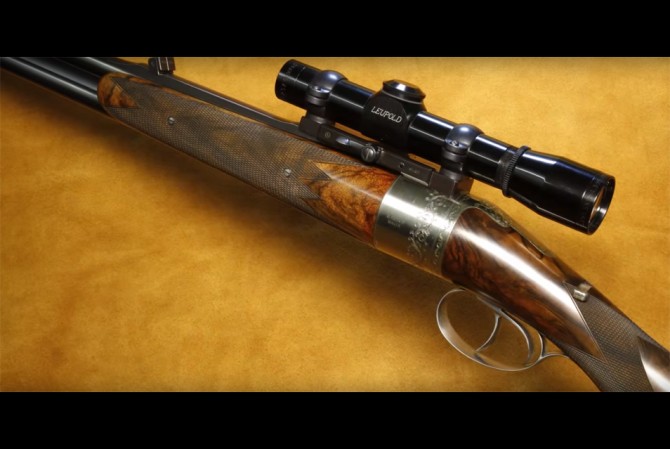 This would be a privilege and a pleasure to shoot. It's the Hoenig Rotary Round Action double barrel, which is perfectly cylindrical. It is an elegantly built, precision engineered firearm handbuilt at a rate of just 5 per year — which might explain why each one sells for around $30,000US. Hoenig designed and built the first one in 1992. Ed Bartlett now helps him build them one at a time in Idaho.

There is currently at least a 5 year waiting period.

“The whole operation, like the rifle itself, is a beautiful thing.  Much of that beauty accrues from the marbled walnut chosen for the stock, precise hand-checkering and perfect wood-to-metal fit. The English scroll engraving on the barrel breech, action tang, trigger bow, hinged grip cap and barrel quarter-rib is done by Hoenig’s long-time associate, Owen Bartlett.  Additional touches on the rifle I examined included a flip-over front-sight hood (spare under the grip cap,) barrel-mounted sling stud, shadow-line cheekpiece, and integral quick-release scope mount that facilitates removal and replacement in a second without loss of zero.”