[This article originally appeared in RECOIL #45, fully available online as of Jan 30, 2020]

Out-of-the-Box Custom for the Big Army

We’re not sure any of us ever expected Big Army to swap out their old Beretta M9 pistols, and we certainly didn’t expect Sig Sauer to bring home the win. And yet, back in January of 2018 the Modular Handgun System trials came to an end, and the M17 was officially born.

Of course, the M17 has been covered extensively ever since, with Glock gripers saying it was only about money, and a whole slew of now-civilian-market former-MHS competitors made it to the buying masses. We now have more inexpensive, lightweight, and reliable plastic fantastic 9mms on the market than at any other point in history. But we digress.

From the first minute of the M17 announcement, there have been companies modifying slides to add lightening cuts and serrations and other details, but the first company to bring out a from-scratch slide was Tacoma-based Grey Ghost Precision. Just as with their Glock slides, GGP is milling from their own blanks, to their own specifications. But why should a brand-new gun that Big Army picked up need some modifications? Casey Ingles, CEO of Grey Ghost tells us this: “When the P320 platform won the MHS trials, soldiers as well as LE departments around the country began adopting the new sidearm. We heard the call. Literally, we were getting dozens of calls each day from our customers in the door-kicking/lead-farming communities asking for a 320 slide with better grip serrations, additional optic options, rebalanced weight, and an improved coating. All the enhancements that professional handgun shooters have come to expect from us. The GGP team did what they do best, drafted up several designs and began to R&D a slide that would give all the M17, M18, and other P320 users a GGP slide that was truly an upgrade.”

Let’s see if this statement holds up.

We need to take a minute to point out that Sig Sauer is producing two different models of the M17: the military version and the civilian version. The M17 and P320-M17 respectively. Normally, the main difference between a civilian and military model of a gun is concerned with select-fire capability and barrel lengths, but in this case it’s even dumber. It comes down to two things: color of controls (baby poop on the M17, and black on the P320-M17), optic plates, and dumbass privates. The civilian P320-M17 comes standard with an optic footprint for a ROMEO1 or Delta Point Pro, but for anything else you’ll be needing an adapter plate or a milling machine. The standard-issue M17 is a little different, not only can you only mount a Delta Point Pro without modification, but the process to install it is considerably more difficult. We’ve heard this explained as “Joe-Proofing.” That’s to say, so rando privates don’t start just adding whatever they want whenever they want — real-life Big Army isn’t like a videogame, and most all units don’t want anyone dicking around with accessories unless they’re an armorer. Thankfully, these [more difficult] mounting solutions aren’t present on the civilian P320-M17. 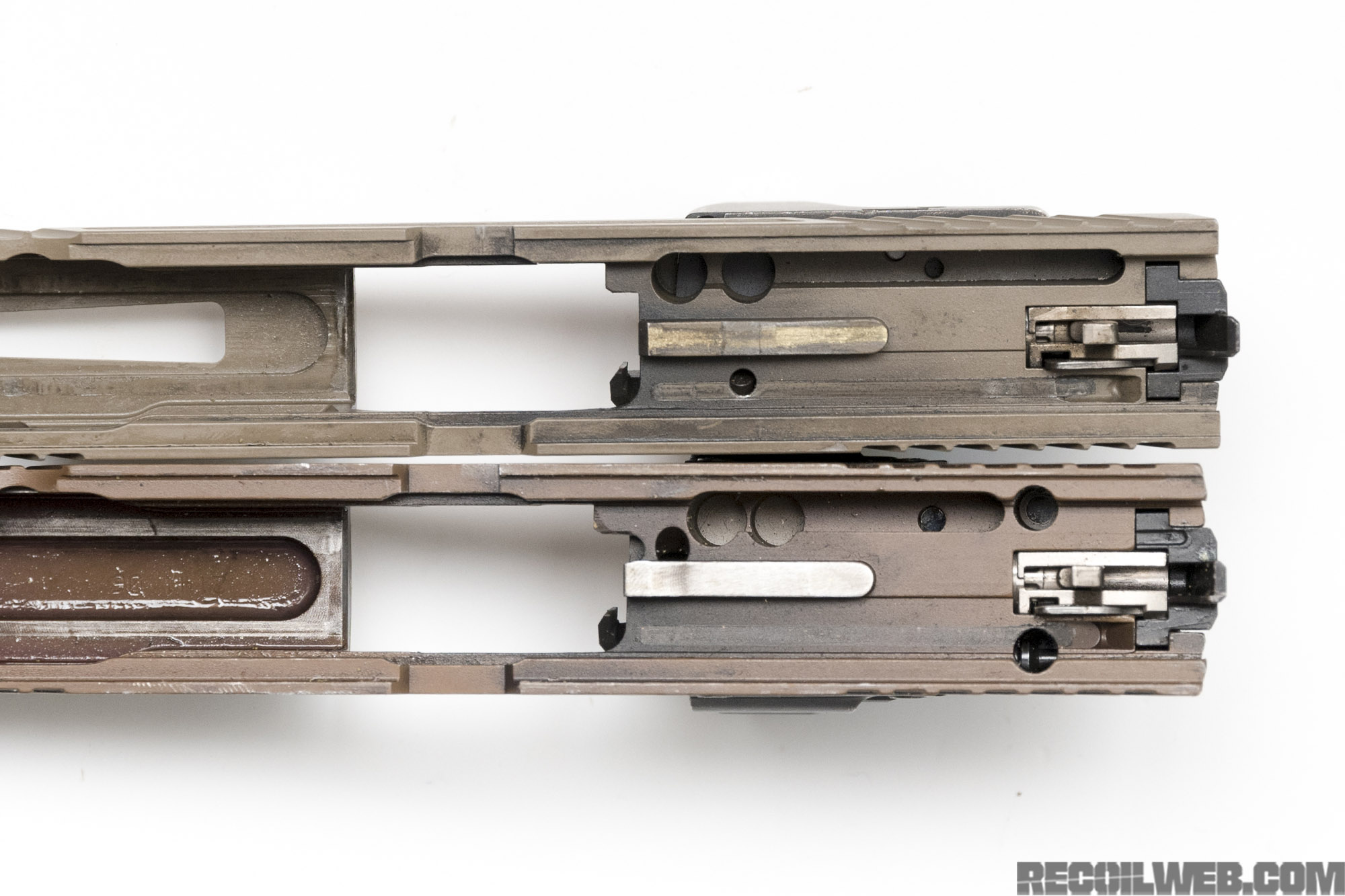 So far as we can tell there are currently more than four different footprints among models — and not one at the time of writing can accept an RMR. Frankly, this fractioning and factioning of optic mounts can’t be helping Sig Sauer.

From this conundrum clusterfuck comes GGP M17 slide. The GGP M17 slide uses the same plate mounting system seen on their Combat Pistol and other Glock-compatible slides. The slide itself has four threaded holes, and two separate adapter plates allowing for not only the Delta Point Pro, but also the Trijicon RMR, JPoint, and the dozens of optics that use those footprints. We also note that the GGP slide, unlike the standard M17, features a rear sight channel integral to the slide and not the cover plate itself. Those who want the durability of backups to a red-dot should rejoice.

We finally note that the M17 and P320-M17 have a loaded chamber indicator. This nanny feature will have to be removed if you want to use an aftermarket barrel or if you want to preserve any dignity. Needless to say, those parts were immediately removed.

Likely most people who purchase the GGP M17 slide will already have a P320 frame and chassis to drop it on and a spare slide to rob parts from. But it doesn’t have to be that way. We found a complete M17 lower online, then were able to obtain a barrel (well, two barrels: one SilencerCo and one Griffin Armament), and slide completion parts to make a one-off pistol.
For the optic, we went with something that would otherwise not fit on an M17, a Trijicon RMR01. And of course, we need a weapon-mounted light and went with a SureFire X300UH-B. Regarding silencers, we went with our main go-to pistol cans: a Dead Air Ghost-M and a Gemtech Lunar-45, depending on how we felt that day. So far as function, accuracy, and operation of the GGP M17 versus the Sig, I wish there were more to report. But the fact of the matter is that they shoot and feel the exact same way. The sharper serrations of the GGP slide were noticeable, however. We couldn’t discern any differences in accuracy between the two either — remember, this is a slide, not a magic button. But at the same time, this also means there was no obvious decrease in accuracy nor operation. At this point both slides were neck and neck.

That all changed when we tried to use suppressors.

Something that was only quietly whispered about at first is now common knowledge: The P320 family doesn’t suppress great (or sometimes at all) right out of the box, and the M17 being a variant, falls right into that category. In fact, according to multiple confirmed sources, SOCOM has been continuing to simply purchase Glock pistols instead of adopting the M17 for this exact reason. Seeing as how our rule is to put a can where you can, whenever you can, that simply wasn’t going to do. We’d have to fix it.

The main issue appears to be that the slide stays in battery slightly too long for the booster assembly to do its job. To put it in plain language, a booster assembly temporarily decouples the weight of the silencer from the barrel, for just enough time for a tilt-action pistol to cycle. The P320/M17 slide simply doesn’t unlock fast enough to allow the booster to work.

Because Sig Sauer has yet to come in-line with the only nation that actually put a man on the moon, OEM barrels are threaded in metric 13.5x1LH, we initially opted for an aftermarket SilencerCo ½x28mm threaded barrel. Just as many who came before us regardless of manufacture, we experienced a lot of failures to extract. After examining the previously virginal SilencerCo barrel and the OEM M17 barrel, we noticed some wear marks on the SilencerCo barrel that directly corresponded to a slight angle cut on the front hood of the M17. So of course, we broke out some tools to file to fit. 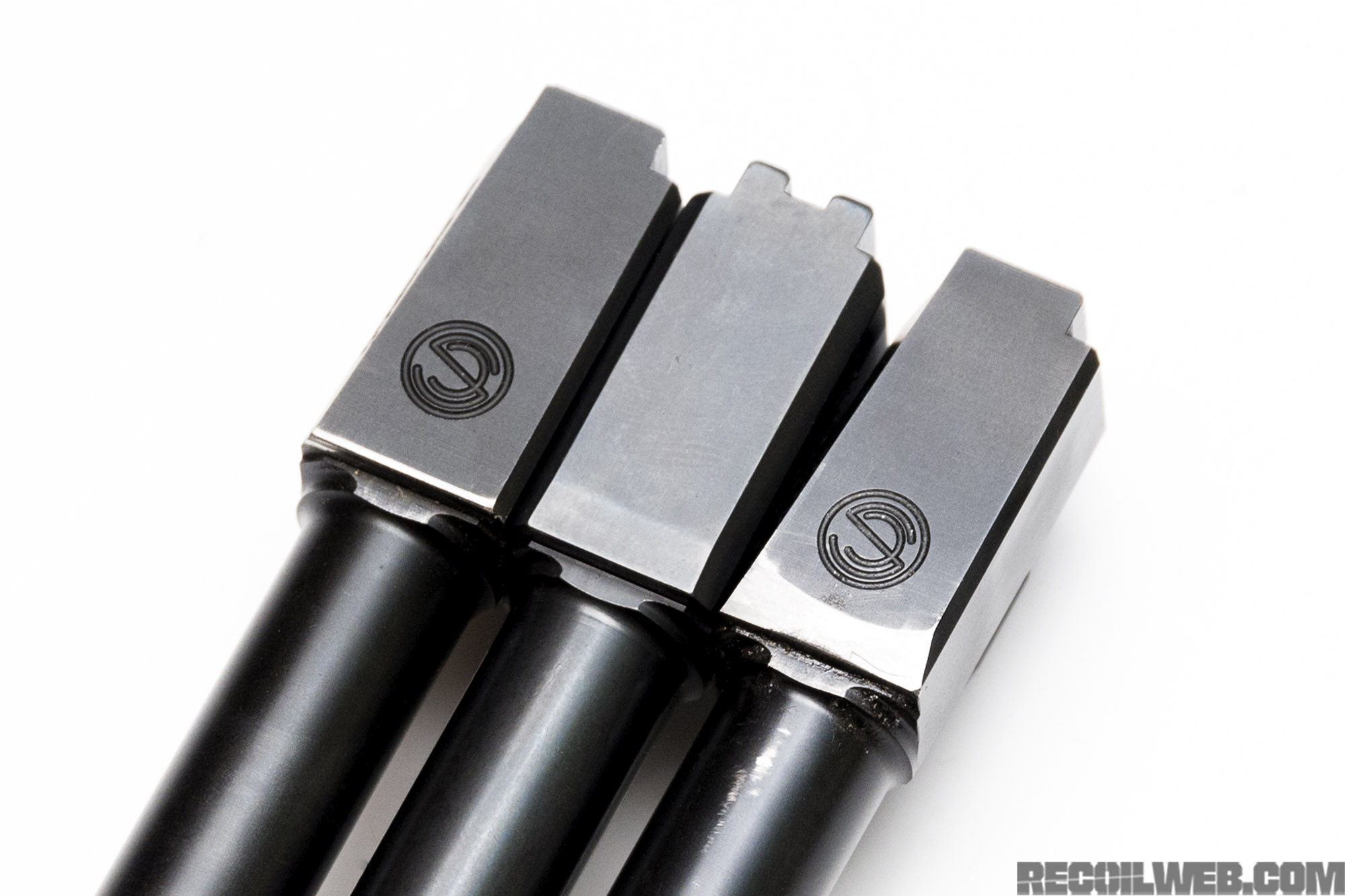 Just carefully matching the front hood angle of the M17 gave us a little improvement — now at least some ammunition would work. We then took the extra step of replacing the captive recoil spring assembly with a 1911-style so we could play mucky muck with spring weight. After much experimentation, the combination of the modified barrel and a 14-pound recoil spring allowed the M17 to run with lightweight silencers and fastmoving ammunition.

But we’re not done.

The Grey Ghost Precision P320/ M17 slide combined with our modified barrel ran with heavier silencers and heavier ammunition — with the factory recoil spring assembly. A drastic improvement. By far the best combination we ran was a Griffin Armament threaded barrel with the GGP slide. The Griffin barrel didn’t require any modifications to work with the slide straight out of the box, though it still has the same limitations of our modified SilencerCo barrel when mounted to the Sig Sauer slide.

We can’t tell you exactly why this combination works better than OEM, but we suspect it’s at least partially due to the lower weight of 9.6 ounces due to the lightening cuts versus the M17 slide at 10.7 ounces, which allows for the pistol to unlock faster while our booster assembly still does its job. We’ve been told that improved barrels are coming from the Sig Sauer factory, which will remedy this issue, and GGP tells us that suppressor compatibility and use was at the forefront of their mind when they developed the slide and likely released-by-publishing-time barrels.

While we haven’t seen much appreciable difference regarding how X brand of threaded Glock barrel performs suppressed versus Y brand, the same cannot be said about the P320 series. If you’re going to run a silencer with a P320, what barrel you buy matters. And the slide matters too.

We were already won over by the fact the Grey Ghost M17 slide accepted more optics than the OEM M17, but the real win was working with silencers of all varieties with a wide assortment of ammunition.

There have been many guns touted as “Glock Killers” through the years, and frankly most of those speculations have been premature. With the M17 and M18 becoming the standard-issue service pistols of the U.S. military, Sig Sauer and the P320 currently have the best odds of actually dethroning the Glock as king of the hill. Though the aftermarket isn’t currently nearly as robust (let’s face it, Glock had a helluva head start), products like the GGP M17 slide help push the P320 closer to the top of the pile.

If history is any indication, we’d anticipate Grey Ghost Precision ultimately releasing their own complete version of the P320 rather than just the slide and parts. A GGP M17 Combat Pistol? Sign us up.