Home » Guns » Guns of the COVID-19 pandemic: What to look for in your first handgun

Guns of the COVID-19 pandemic: What to look for in your first handgun While we maintain that the rifle is the de facto firearm for self-defense in a pandemic like COVID-19, there is still plenty of room for a handgun. If you've never considered purchasing  defensive firearm before and the long gun looks intimidating from a user perspective, a handgun might be a better option. You head to the local gun shop and find things pretty well picked over and the guy behind the counter is doing his best to give you good advice, but he's got a limited inventory and he's been working 12 hour days for a week.

So, what should you consider when shopping for your first handgun when inventories are limited?

As with anything else in life, focus on the mission. Your needs, your goals, your situation; in other words what you need to accomplish with the firearm. Why do you need this particular firearm and how will it help you complete your mission?

The role of the handgun

For most first time gun owners, the defensive handgun will be their gateway into personal protection. They're portable, concealable and most perform sufficiently for personal defense. The only problem is that all of the popular mainstream pistols from companies such as Glock, Smith & Wesson, SIG, Heckler & Koch,  Springfield and FNH are sold out.

Ballistically they are not as effective as a rifle or carbine. This is a tradeoff for portability, shootability (technically a handgun is designed to be fired one-handed) and concealability. As a result, the typical handgun round is underpowered when compared to a rifle.

The supply chain will be filled again and when it does your first choice should be one of the following: Glock: The models 17, 19, 34 and 26 are all double-stack 9mm pistols that share a common magazine format. You can run higher capacity mags from the G17/34 in the G19 and G26, but not the other way around. G26 magazines will only fit the G26. The corresponding models for 40 S&W work on the same principle. The slimmer single-stack models such as the G43 use their own magazines.

Later generation Glocks have replaceable back straps to aid in fitting the pistol to the shooter's hand. 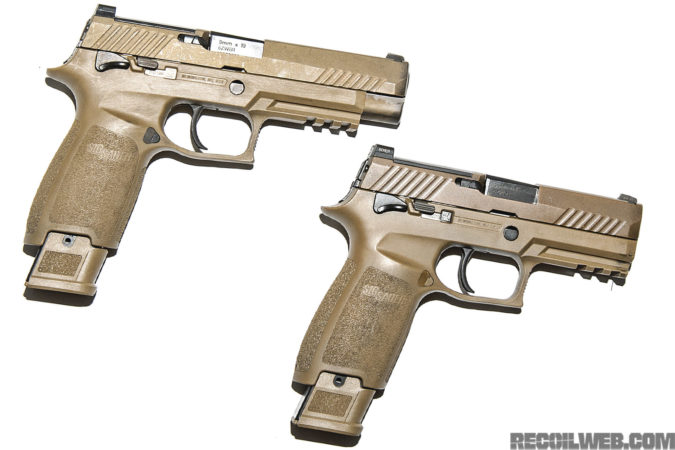 The winning gun(s) of the U.S. Army's Modular Handgun Solicitation are based on the SIG P320. The M17 is full-size, and the M18 is carry-size.

SIG: The legacy P-series aluminum framed pistols are not as common as they once were. They've largely been replaced by the more popular P320 series. The P-series (P220, P226, P229, etc.) are fine handguns but some shooters complain about a high bore-axis, heavier weight due to the aluminum frame and they are a little more complex for the average person to work on.

The P320 may have the same prefix, but it's a completely different animal. This is a polymer framed, striker-fired pistol, but in this case the plastic frame is not the part that makes it a “gun”. There is a metal chassis within the frame that allows the user to change grip frames with ease. The same goes for slides, barrels, calibers, etc. A P320 owner could theoretically buy one pistol and have 4 different calibers of varying length at their disposal along with a frame suited to their needs without the hassles of trading in one gun for another.

A variant of the P320 was recently selected for use by the U.S. military. FNH: Fabrique Nationale Herstal is perhaps the oldest continuous manufacturer of semi-auto firearms and from its inception in the 19th century through today, it continues to produce cutting-edge designs. If you see an FN pistol languishing in a case during a period of panic buying, it's only there because the other buyers didn't know about it. CZ: This firm has been turning out quality firearms since World War 2. Its new polymer designs are as reliable and accurate as their legacy CZ 75 model and in many ways a lot better. Smith & Wesson: One of America’s oldest firearm manufacturers, S&W is famous for its revolvers. But, it's semi-auto M&P (Military & Police) series has become very popular and the company constantly works to improve them. That being said, S&W's older metal frame pistols are no slouch, either. If that is whats left with after all the new firearms are cleaned out, it's a good option. The Sigma and SDVE series pistols are adequate but, they'd be pretty low on our list of pistols to buy… even during a panic. Ruger: Primarily known for its revolvers, Ruger makes some very affordable pistols that are often overlooked. We've tested a few over the years and found them robust, reliable, and accurate. 1911 pistols: One of the first successful semi-auto pistol designs is still hanging in there 110 years later. This is a classic design that has more moving parts than a Glock and has its good points… and bad. Most modern made 1911s are way ahead of their predecessors as far as accuracy and reliability goes. Capacity is typically limited to 7 or 8 rounds, but the slim grip frame makes them comfortable to shoot. Revolvers: At first glance revolvers seem the best firearm for new shooters. Their operation is simple, they are easy to load and unload and they have been around in one form or another for almost 190 years. They are, however, more difficult to shoot well than a semi-auto pistol, particularly in double-action mode.

Back to the ammunition

As this article is being written, there is definitely an ammunition shortage brought on by hoarding, panic buying and hell, maybe a bald madman trying to corner the market.

During a previous ammunition shortage when hoarding and gouging seemed far worse than it is during the COVID-19 rush, the only ammunition available for two weeks was 45 GAP. This is a shortened version of the 45 ACP round that only works in the Glock 37/38/39 series, and one version of the Springfield XD offered for a year or two. Five cases of that ammunition is completely worthless without having a firearm that can shoot it. There is a reason why there are still boxes from that very lot still sitting on the shelves. I say the panic then seemed worse, only because it was that situation that made me vow to never be caught without ammunition again and to always keep a good supply on hand.

Which caliber for a COVID-19 handgun?

You can't exactly shoot a virus, and we're not about to get into handguns for subsistence hunting –which is a whole different variety, and an article in and of itself. We're talking about personal protection, and the caliber you choose for that mission.

Whether the threat comes from street criminals, stray animals, people forced to desperation due to job loss, or even civil insurrections and riot, by preparing for these worst case scenarios, you'll find yourself better prepared for a lesser, or more realistic threat. For handguns the bare minimum we recommend in a defensive caliber is 380 ACP. We find 9mm, 40 S&W and 45 ACP preferable. You may see a lot of 10mm ammunition in stock and find firearms for it. While it is a good, capable round; there is significantly more felt recoil for little yield in improved ballistics with a 4-inch barrel.

On the revolver side you really want to stick with a firearm chambered in 38 Special or 357 Magnum. Revolvers in the bigger calibers like a 44 Magnum are harder for a new shooter to adapt to in a short period of time, but the 44 Special is right in line with the ballistics and felt recoil of a 45 ACP. So, add the 44 Special as a third revolver option. There are also options for a revolver chambered in autopistol rounds such as 9mm, 45 ACP, 10mm or 40 S&W. As an admitted revolver fanatic, the author owns over 100 revolvers, but none of them in one of those calibers.

However, if the only handgun you can find in a shop is a Ruger GP-100 chambered in 10mm and the last time we checked there was a lot of 10mm gathering dust on the shelves; it may not be the worst choice. Recoil and ballistics are on par with most 357 Magnum loads with a few by specialty ammunition manufacturers like Doubletap that push that into the lower recoil threshold of a 41 Magnum. It is much more pleasant to shoot from a revolver than a semi-auto and is not a bad option if that is all that remains.

There are other calibers worth mentioning such as 32 H&R Magnum, 327 Federal and even 22 Magnum. These rounds function fine in revolvers and again, if it is the only handgun and ammunition combination at your disposal they are decent. Not preferable but they can be effective. In a sense, it may be a good thing that shops are cleaned out of all the cheaper practice types of ammunition. These are usually round nose full-metal jacket (FMJ) types and, on the whole, don't have the best ballistics for self-defense. With some of these rounds, there will be little to no expansion and the threat of over penetration is very real.

For self-defense purposes in a handgun round, you want expansion. A 9mm bullet has a diameter of about .355-inch. FMJ ammunition will rarely expand beyond .365-inch, if at all, and usually only when it strikes something hard in the target, like bone. A jacketed hollow-point round should expand to at least .455-inch, or more. This creates a bigger wound channel and when placed correctly on the target is what helps stop the threat.

Lastly, you must train with any firearm you're staking your life on. This may be difficult for some right now, with most indoor shooting ranges closed down and many outdoor ranges or tracts of BLM land being made inaccessible to prevent gatherings of 10 or more people, but there are opportunities out there. You may just need to put in a little more effort to find them. Then you will need to put the effort into your training so that you can hit your target consistently.

The important thing to stop an attacker is shot placement. A small round such as a 380 ACP is more effective than a larger one such as even a 44 Magnum if the .380 shot hits an attacker's vitals and the more powerful round does not. Being able to make those kinds of effective shots only comes with training.