As more and more states allow for straight-walled rifle rounds for hunting in traditionally shotgun-only areas, we’ve seen an increasing interest in big-bore loads such as the .450 Bushmaster and more recently, the .350 Legend. Calibers like this pack a punch both in terms of recoil, but sound and blast as well.

It was only natural that we’d start seeing more silencers fit for this role, and the latest from Griffin Armament is exactly this. The Bushwhacker 46 plays well with everything mentioned above, as well as transforms into a pistol suppressor if needed. What you see on these pages is a preproduction model, but production models are available now.

DESIGN
The 8.25-inch-long tube is turned from 17-4 stainless steel with a black nitride finish, and the baffles are made from 6AL4V titanium. The finish on our example was deep and uniform, which we’ve totally come to expect from Griffin Armament. The stainless endcap is removable and interchangeable with Griffin’s Paladin line of silencers. It may seem a bit long for some, but keep it in your head that this is designed for the likes of .450 Bushmaster.

With increasing modularity on their minds, Griffin Armament jumped on the SilencerCo Omega 1.375×24 threaded-rear-end bandwagon, which means there are mounts and options galore. The Bushwhacker itself ships with a Griffin Plan-A 1.375 mount included, along with an accompanying 5/8×24 Minimalist 30-caliber brake, as well as a new compatible pistol booster. The Bushwhacker doesn’t come with the piston required for the pistol booster, so you’ll have to purchase that one separately if you want to use the Bushwhacker on a pistol. However, if you already have an appropriate piston by Griffin, SilencerCo, or Rugged you’ll be all set, as you also will be if you have a Dead Air piston designed for the Odessa (no-go for the rest of the Dead Air pistons). 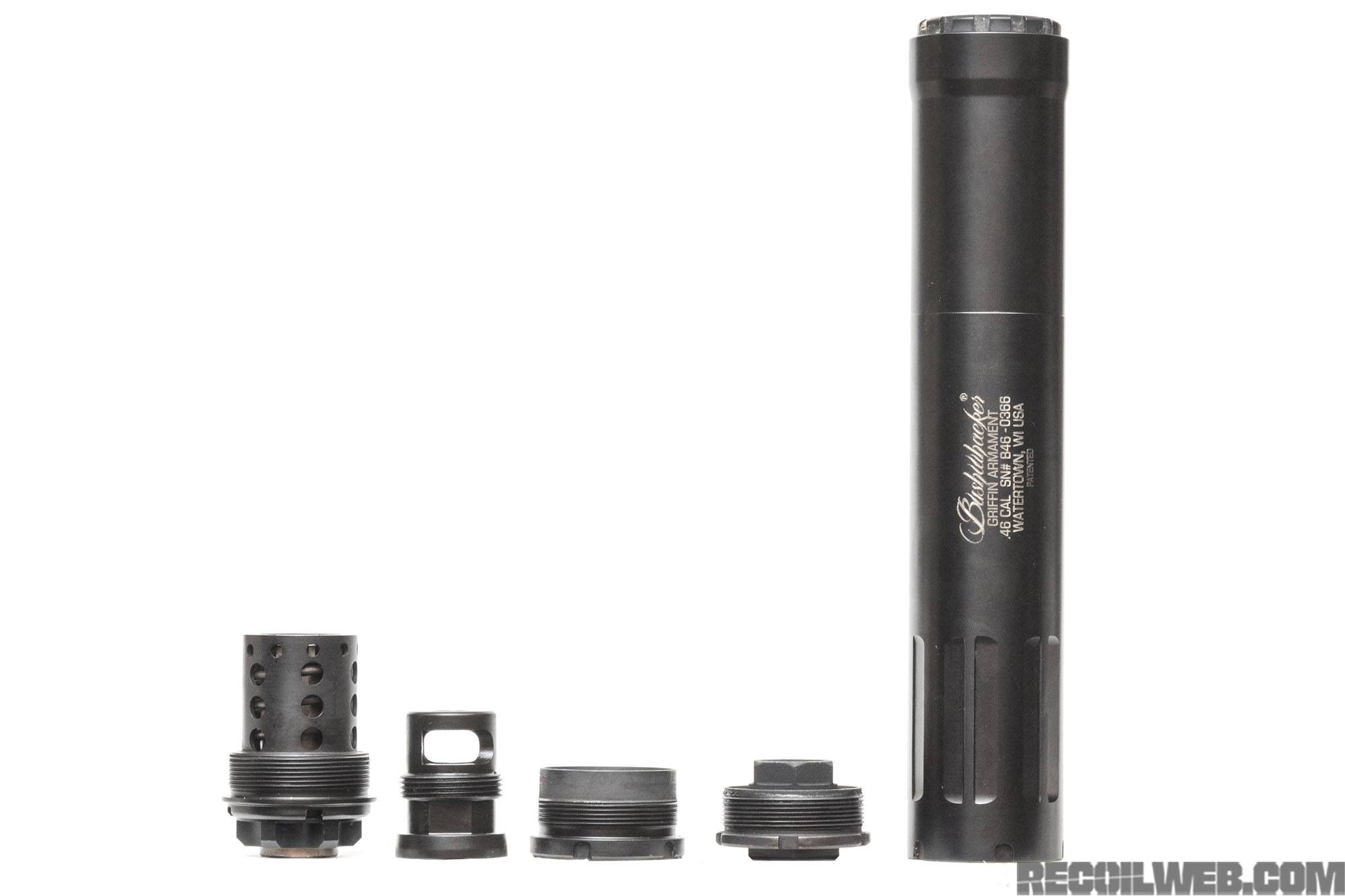 AT THE RANGE
Our foremost thought was to mount the Bushwhacker 46 on a .350 Legend for a hunting rig. While the silencer is over-bored for that caliber, it almost meant that it kept the gas pressure down on our rig. While OSHA wouldn’t like the sound level, it was a helluva lot better than a simple flash hider on the end. Undoubtedly there would be a few more decibels taken off the high end if we used a Paladin endcap specifically made for .350 Legend (which doesn’t currently exist — hint, hint, Griffin).

There hasn’t been a complete set of testing data available, and even then there are arguments to be made about how testing should occur. With that said, the initial numbers we were provided matched our subjective impressions at the range with 137dB from a 16-inch 7.62N, 130dB dry from .45ACP pistol, and pushing the loudness level into the upper 130s with a 16-inch 5.56mm. LOOSE ROUNDS
Like many general-purpose silencers, this one did “alright” as a multi-caliber silencer, but that’s really not what this is. This is a big-bore suppressor that also plays well with others. If you’re looking for a general-purpose silencer, this one may not be for you, but if you have a use-case for suppressing .450 Bushmaster or .458 SOCOM, you’ll no longer be stuck with something much larger originally designed for something like a .50BMG. Here's what Griffin Armament had to say in their press release:

After fourteen years of dedicated professional work and development in the sound suppressor market, Griffin Armament is proud to introduce the Bushwhacker® 46, a universal sound suppressor designed to maximize feature functionality, performance, and value with a vast selection of caliber compatibility.

The Bushwhacker’s durable 1.375×24 threaded 17-4 stainless steel tube chassis, is supplied with a Griffin Plan-A Taper Mount adapter, Taper Mount muzzle device, and a booster piston housing. These factory inclusions allow the Bushwhacker to quickly and easily be configured for centerfire rifle or handgun use. Its .46 caliber diameter provides end users with the most caliber flexibility possible, while retaining quality sound suppression. .450 Bushmaster, .458 socom, .45-70 Govt, and other large bore calibers are at home with the Bushwhacker 46. Additionally, .30 caliber Paladin blast shield front cap can be interfaced with the Bushwhacker 46 further improving sound performance on the Paladin with 30 caliber and lesser rounds like .308 Win, .300 BLK, and 6.5 Creedmoor.

Sound suppressors can increase in weight and reduce in internal volume, losing performance over time from carbon and copper accumulation. The Bushwhacker features Griffin Armament’s unique, patented Ratchet-lok end cap which provides the user with a robust mechanism to disassemble their suppressor easily for periodic cleaning and maintenance. This consumer demanded technology and the included tools ensure that your investment can be reset to factory weight and sound performance specifications with minor preventative maintenance.

Additional accessory support allows the Bushwhacker to be mounted to a myriad of hosts via the 3-lug QD kit, Plan-A XL, or the 1.375×24 A2 adapter. A specialty mount was also designed and manufactured for mounting the Bushwhacker to an unmodified 1928a1 Thompson via the Cutts Compensator.

Performance, Durability, and Versatility are hallmarks of the Griffin Armament brand. These qualities are embodied in the Bushwhacker® 46 and will ensure this universal sound suppressor remains a highly demanded product for years to come.

To find out more on Griffin Armament’s entire product line, please visit their website at www.GriffinArmament.com. For attendees of the 2020 SHOT Show, Griffin Armament will be exhibiting the Bushwhacker, along with the rest of their product line at Booth #8207.