Give them the Axe: Exploring the Henry Axe .410 “Firearm”

About 60 years ago, Steve McQueen played a bounty hunter armed with a cut-down Winchester 1892 lever action. It had no stock and was called the Mare’s Leg on the TV show Wanted: Dead or Alive. No such weapon had ever existed in the historical West, but it became an iconic Hollywood so-called “Western” firearm — so much so that Henry Repeating Arms produced a version of it using the same name. Their latest incarnation, known as the Henry Axe, follows this tradition but as a .410 smoothbore.

The Henry Axe falls into that nebulous class of firearms known simply as “firearms.” These types of guns must be a minimum of 26 inches in overall length, are allowed a smoothbore instead of a rifled one, and have never had a buttstock installed. That last part is important because a shotgun is defined specifically in U.S. code as “designed to be fired from the shoulder.”

These characteristics allow the firearm in question to be built as a smoothbore. The trend started a few years ago when companies like Black Aces Tactical, Mossberg, and Remington rolled out 26-inch OAL smoothbore pump action firearms with an elongated pistol grip and 14-inch barrels (see CONCEALMENT #8 for a detailed review). These were in the spirit of the U.S. Marshall’s Witness Protection or “WITPRO” shotguns — the go-to solution for increased firepower in a compact package before they figured out how to make a reliable short-barreled AR-15 or M16. As always, these designs were followed by semi-auto versions in 12-gauge; eventually people wanted a lever-action, so it was left to one of the most iconic lever-action manufacturers on the planet to churn out a lever-action shotgun: Henry Arms.

One might think that 12-gauge would be the caliber of choice — because Terminator 2. But a 12-gauge lever-action shotgun is a beast unto its own, and Henry chose the .410 bore in a 2.5-inch chambering as the base gun for the Axe.

One of the more noticeable features is the safety on the Henry Axe. There’s no lever, cross-bolt, or even a half-cock notch to rest the hammer. The hammer’s either cocked all the way rearward or rests in the down position. According to Henry, the rifle can’t be fired unless the trigger is squeezed while the hammer is cocked.

In addition, dropping a loaded Axe won’t cause it to fire. If the hammer slips while being cocked, the gun won’t fire either. However, if you’re lowering the hammer onto a live round in the chamber while squeezing the trigger, the gun will fire, so be very careful when doing that.

While a single brass bead front sight is close enough for government work, the Axe has a drilled and tapped receiver that accepts a Weaver 63B scope base.

Another innovation Henry took full advantage of was a side-loading gate on the receiver. Prior to 2019, all Henry lever guns loaded via the front of the loading tube, keeping true to the spirit of the original Henry rifles manufactured in 1860. After a decade or so of customer requests, Henry installed a side-loading gate on select models, and the Axe is one of them. This firearm can be loaded from the breach as well as toward the front of the barrel. Notably, the Axe can be unloaded and made safe quickly by opening the front of the magazine tube rather than having to cycle through the action. 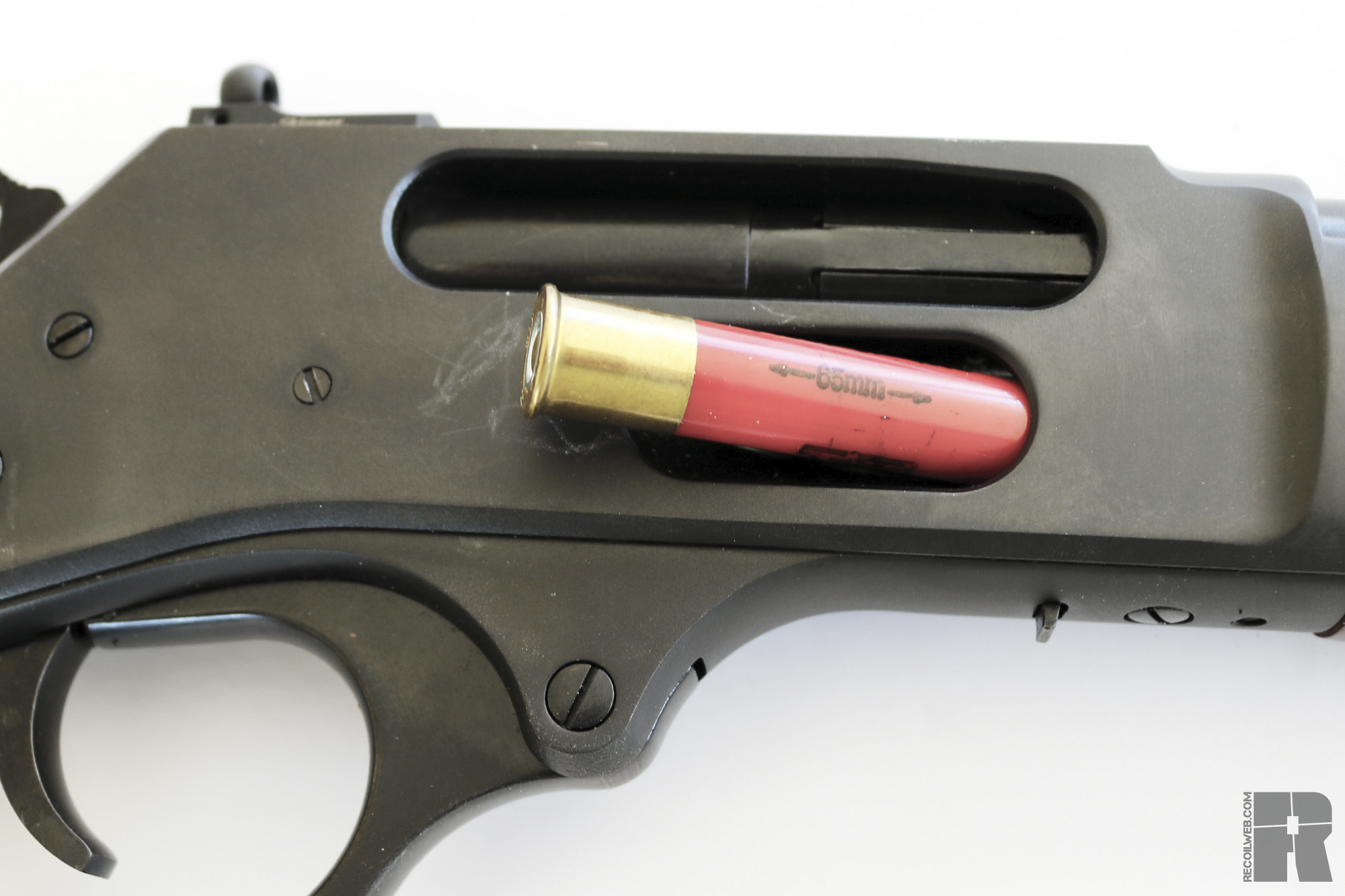 At one time, we were offered a semi-automatic magazine-fed .410 shotgun for review. The manufacturer insisted that it was in use by SWAT teams, and the military was looking at it. We politely declined because no one seriously bought these claims.

It’s not that we have a bias against the 410 shotgun; we have a few in the safe and they make great sporting and bird guns as well as training aids. In an end-of-the-world situation, a good 410 will put meat on the table and work well as a close-range varmint gun.

We have said in the past that handguns with rifled barrels chambered in 45 Colt/410 are only useful for shooting snakes and not a well-thought-out self-defense gun, because the rifling plays hell with shot patterns and most 410 loads are marginal at best. However, several self-defense rounds made for the 45 Colt/410 revolvers, such as Winchester PDX, perform well through the smoothbore barrel of the Henry Axe —almost as an unintended consequence. The 15-inch barrel gives these rounds quite a bit of a boost in performance.

Standard 410 Buckshot rounds are loaded with three pellets, and again, while not an ideal load, it can be effective in the right hands. If you’re looking at something like this for self-defense, there are better options elsewhere.

The Henry Axe comes with a single full invector choke. This allows you to tighten your shot pattern if you so choose. A cylinder-bore choke may seem more practical and versatile, but in something like the Henry Axe we were pleasantly surprised with the results of the full choke in minimizing spread of birdshot loads. This is the tightest choke tube that one can put on a shotgun, and it’s completely safe to use with any type of commercially available load from birdshot to buckshot to slugs.

Several manufacturers offer belt and back holsters or scabbards for the Henry Axe, Mare’s Leg, and Rossi Ranch Hand. We find most of them to be a bit cumbersome and only useful for playing cowboy at a range or Old West reenactment. One item we did find useful for the Henry Axe was the Kurz scabbard made by DeSantis Gunhide. 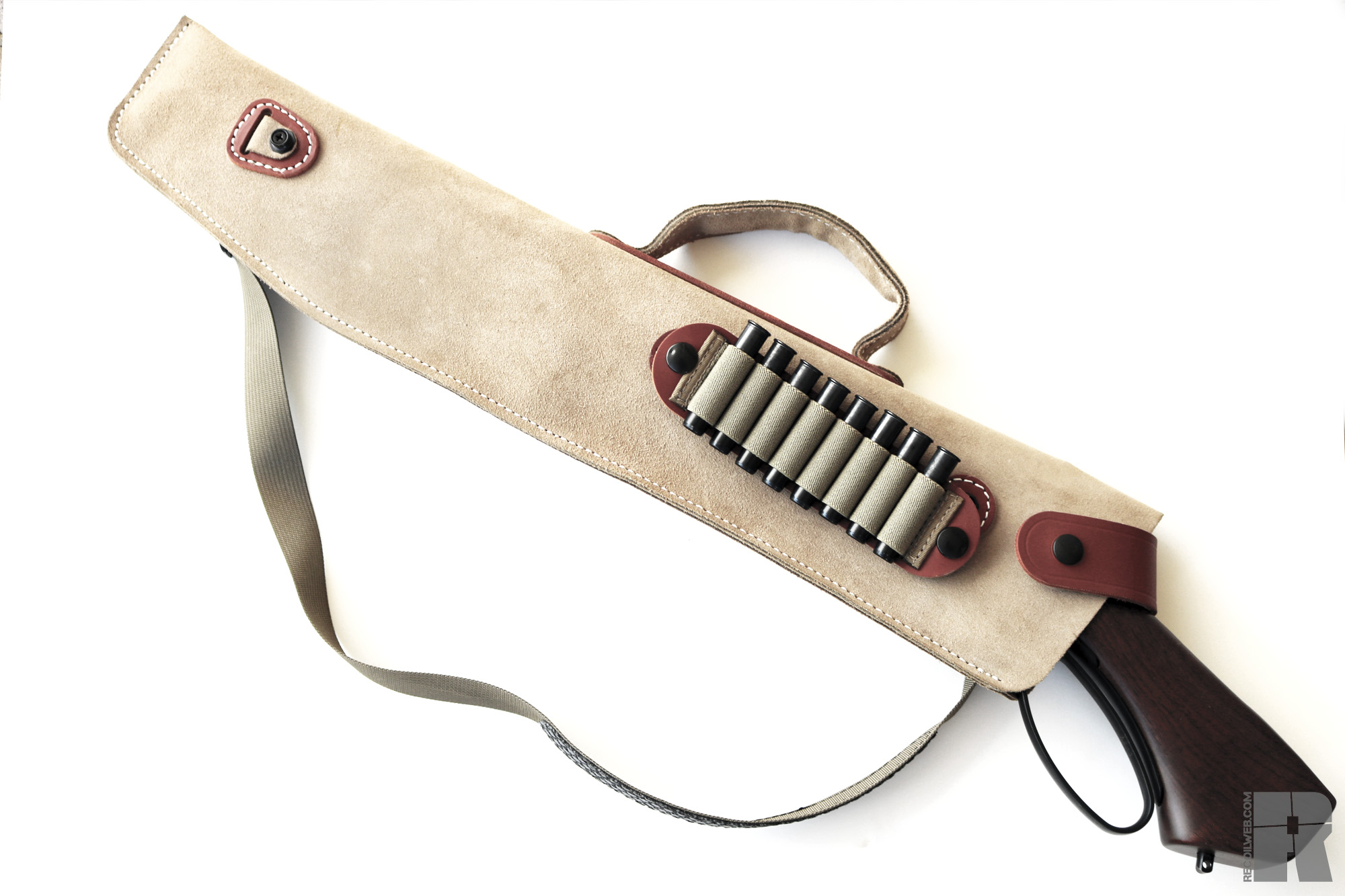 The Kurz is an old-style canvas and leather scabbard with a leather carry handle and a strap that was developed for the larger-bore Mossberg Shockwave and Remington TAC-14. The Henry Axe fits like it was made for it, and the external leather shell carrier can be swapped out from 12-gauge to 410, giving you an additional eight shells at your disposal.

If you watched reruns of Wanted: Dead or Alive, you may have it in your head to fire the Axe from the hip like McQueen. That’s fine for messing around at the range, but if you want to actually hit where you’re aiming, you should try shooting it like a stock-less shotgun. Bring the Axe up as if you were firing a shotgun and simply pretend the stock is there. Acquire your target and fire. On larger smoothbore firearms that lack a stock, it’s recommended to pull with the rear grip while simultaneously pushing forward on the forend to control recoil when shooting. This isn’t necessary with the Axe because the 410 has very little recoil.

Some shooters put the end of the Henry Axe’s pistol grip into their chest and fire it while looking over the barrel at the bead sight. We found this too unnatural but the recoil is minimal, and it may be a solution for some shooters, so certainly give it a try.

We added a Skinner peep sight that fit into the two rear mounting holes of the receiver. These sights are available for most lever guns with a drilled and tapped receiver. Although they’re made with various-sized interchangeable apertures, we omitted the aperture to provide the same type of sight picture as a ghost ring sight. From busting clays to shooting water jugs, we had more fun with the Henry Axe than we have had with any other firearm in quite some time. Sometimes shooting small targets with a light-recoiling, small-bore shotgun is what it takes to remind you of simpler pleasures. At the same time, don’t mischaracterize the Henry Axe as a toy. It may be fun to pretend to be Josh Randall for a few hours, but this is no water pistol. It’s just as capable as any other firearm for taking the life of an animal or even a person.

Effective range as a hunting gun is limited to 40 yards — and even that’s a stretch. There are other designs better suited for that task, but you can make it work if you’re mindful of the limitations of a 2.5-inch 410 round.

The Henry Axe is a lightweight firearm that evokes the spirit of the Hollywood western without the historical accuracy of the true Old West. Its old-time looks and manual of arms merges beautifully with modern materials and engineering. The Henry Axe is also a good base gun if you want to build an NFA short-barreled lever-action shotgun. After your Form 1 gets approved, have it engraved with the required information and add the buttstock of your choice.

We found it a bit heavy for a 410; however, most of our other 410 shotguns are single-shot or over/under shotguns. The Henry Axe may not be ideal for self-defense, hunting, or even sporting events such as trap, skeet, or clays, but it can fulfill a need all shooters should have — just having a damned good time on the range.