There are performance gaps among many of today's rifle cartridges, not obvious to most of us, that beg to be filled. The 300 PRC fills that gap.

The .300 Winchester Magnum is perhaps the most beloved hunting rifle cartridge in America. It’s also the current choice among military snipers. Its popularity is based on its ability to shoot flat, reach far, and hit hard. It’s not without faults, though. That's where the 300 PRC comes in.

And, when Hornady Manufacturing’s ballisticians took a close look at the .300 Win. Mag and its .30-caliber magnum shelf mates, it saw an opportunity to combine the best features of the lot into a single, modern cartridge and chamber design that was missing.

Hornady ballistician Jayden Quinlen explains the considerations Hornady took into account when deciding how to build its new .30-caliber magnum. “There has not been a SAAMI standardized, factory-produced cartridge that combines all of the attributes needed for long-range accuracy,” says Quinlen.

Namely, he points to the need for a cartridge that has a standard, magnum bolt face that properly seats modern, long-range and traditional projectiles outside the case body, provides optimized body taper, shoulder angle, neck length and has a deliberate throat clearance in the chamber. Further, it was important to design the case that accommodates propellants best suited to long-range shooting and also maximizing barrel life. We’ll touch on each of these attributes below.

The first attribute, staying with a standard bolt face, is the easiest to explain, as it means switching to 300 PRC is a matter of rebarreling an existing action, rather than buying a whole new gun.

Building a cartridge and chamber designed for precision means giving up the belted magnum concept that’s used in the .300 Win. Mag.

Originally developed from the 375 H&H Magnum, which has narrower shoulders than a Portland hipster, it was an OK solution in its day, but headspacing a cartridge from the belt leaves as much as 0.009 inch of room for error in pushing the business end of the round into the chamber throat.

The belt rebate in the chamber wall also leaves room for slop as the bullet enters the chamber, allowing the bullet to wander a bit before seating, which introduces the possibility of the bullet to enter the rifling ever-so-slightly offcenter.

And, a ten-thousandth of an inch, or degree, as the bullet begins engraving in the rifling is magnified massively at 1,500 yards once the forces of wind, gyroscopic stability, and gravity have their way with it. Case geometry is a complex topic, but we’ll keep it simple and only look at the cartridge taper from the base to the shoulder. Less taper equals more case volume for propellant, but more difficult extraction.

More taper means the bullet has to move higher as it progresses under gravity through the chamber and into the throat. The more bullet rise, as we’ll call it, the less precisely the loaded bullet enters the throat. Combine this with a loose throat dimension and there’s a good chance that bullet is going to enter the lands slightly off-axis.

Modern, long-range bullets are heavier and have longer, more aerodynamic bodies than traditional bullets. Seating them in a case in a way that holds them securely sometimes means shoving them down into the powder column. Compressing a powder charge changes the way it burns and causes inconsistent pressures.

And, we know consistency is the basis of precision, so dropping or gaining a few feet per second at the muzzle leads to a change in a bullet’s elevation that grows the farther it travels

On the opposite end of seating depth is cartridge head height. This is the amount of room a cartridge occupies, outside of the case. To accommodate long, modern bullets as well as traditional bullet designs requires a longer cartridge length that allows the bullet to be seated out of the case body and a chamber design with a throat that does the same.

The cartridge capacity must also be designed, says Quinlen, with specific, long-range propellants in mind to prevent voids between the bullet base and the powder. We want the case to be 100-percent full of the optimum powder to give pressures that make full use of the operating envelope.

Factory loaded ammo is plentiful in the shorter, lighter bullet range, but ammo manufacturers often shy away from producing ammo for modern long-range projectiles because, too often, the best performance comes from ammunition loaded outside of SAAMI specifications … and doing so would likely see manufacturers placing the profit from such loads directly into its litigation fund

Snipers working at 2,000 yards with only a shot or two to make a hit track barrel life meticulously and hate cleaning their barrels for fear of causing a point of impact shift, let alone rebarreling a rifle. So, Hornady smartly placed barrel life prominently on its list of considerations.

So, the question we face is whether there’s already a cartridge on the market that answers the long-range call as we’ve outlined. Let’s look at a few of the contenders Hornady’s taking on with its .300 PRC, namely the .300 Winchester Magnum, .300 Remington Ultra Magnum, .300 Norma Magnum, and .30 Nosler. 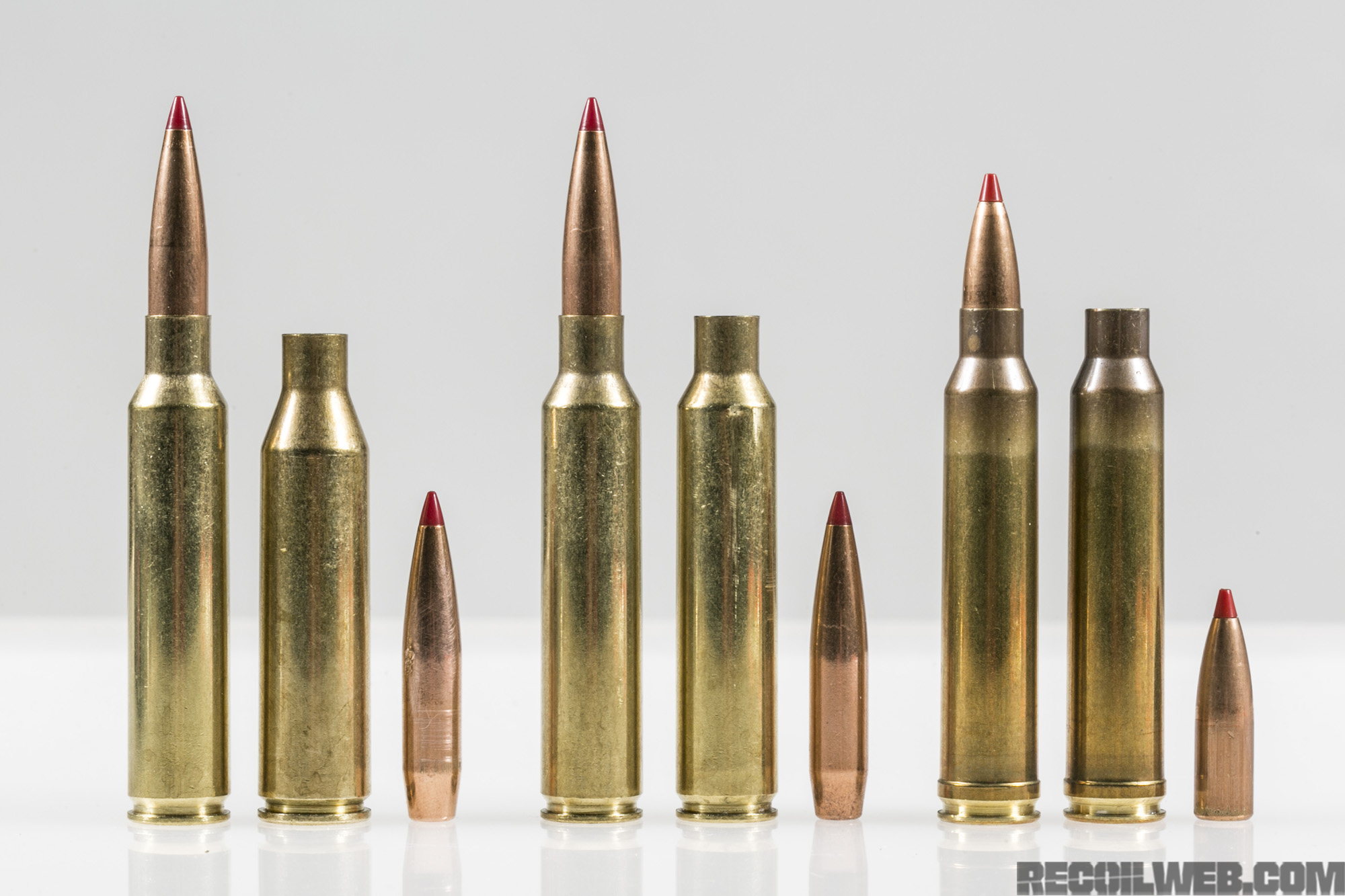 The .300 Winchester Magnum is redlined right off the bat, thanks to its belted case. Add to that the chamber’s maximum 0.315-inch throat diameter, and you’re adding the “hot dog down a hallway” effect that makes it hard to get the .308-inch bullet to enter the rifling at a consistent angle, as Quinlen explains it. Also, the .300 Win. Mag.  suffers from a short combined overall cartridge length. Long bullets seat deeply, which isn’t good for precision.

Propellant selection is good for traditional bullets, up to about 200 grains. There are plenty of powders that’ll give good case fill and consistent velocities using smaller bullets.

Moving up past 200-grain projectiles, though, limits the number of powders that’ll work well with bigger projectiles. Barrel life, by all accounts is good for this caliber, as it’s generally burning around 70 grains of powder. Not a scorcher.

The .300 Remington Ultra Magnum uses a rebated case rim which generally blows, since it sacrifices case head surface area and reliable extraction in an effort to match a larger case with a standard-sized bolt face.

The .300 RUM has a much longer cartridge length than .300 Win. Mag., but the case itself is so long that big bullets dip as deeply into the powder stack as they do in the .300 Win. Mag’s.

The case capacity is huge, but there aren’t a lot of powders that’ll take up that much room and burn well. On the plus side, the throat 0.3091 diameter is much tighter than .300 Win. Mag., and there’s far less chance of the bullet tilting into the rifling. Barrel life suffers from the large amount of powder the RUM burns, typically 95 to 100 grains.

The .300 Norma Magnum is growing in popularity despite a few downsides. One, it’s not a SAAMI-approved cartridge, though it’s CIP approved. (CIP is the European equivalent of SAAMI.) Two, it uses a non-standard in the U.S., Lapua-sized bolt face, which limits the number of actions that it can be chambered in.

Three, it’s got a lot of case taper. As we explained earlier, this can cause inconsistent presentation of the bullet to the rifling based on headspace variations. Tighter headspace means the bullet is centered. Looser headspace will leave the bullet a skosh low in the throat.

Norma gives up ground when it comes to case capacity. There’s a ton of room in there, and it’s impossible to fill it all up. This makes the cartridge sensitive to the rifle’s orientation when firing. Barrel life is similar to the RUM, burning 85 to 95 grains of powder.

30 Nosler is the latest comer cruising for wallflowers at the .30-cal prom. It comes in with a standard magnum bolt face, a non-belted case, more case capacity, and a tighter throat than the .300 Magnum. But it’s hamstrung by its overall length, forcing those longer bullets down into the powder column. It sips powder, so barrel life is solid.

As you may have already guessed, Hornady took in the pitfalls of the preceding cartridges and addressed each one of them with the 300 PRC. Right down the list, it’s got a standard bolt face, a 3.70 cartridge overall length that allows seating the bullet way out of the case, a case overall length of 2.580 that leaves 1.120 inches of head height to a fit longer bullets while meeting the COAL requirements. The throat is a tight 0.3088.

The case was specifically designed to fit long 200- to 225-grain bullets with the ideal amount of temperature stable powders, such as Retumbo and Reloader 26, while still working well with shorter, lighter bullets using 4831 and Reloader 23. Burning 75 to 80 grains of powder should equate to average barrel life.

Heck, the only downside of 300 PRC at the moment is Hornady is the only one loading it. But the ammo it’s producing is high performance 212-grain hunting and 225-grain match cartridges. We had a chance to shoot both the 300 PRC 225-grain ELD-Match and 212-grain ELD-X hunting ammo in their natural habitats.

We smoked steel out to 2,000 yards with the ELD-Ms using a half-minute GA Precision Templar rifle in Texas and then filled the freezer with an ELD-X that provided a clean kill of a bull elk in Montana at 350 yards with a rifle from Remington’s custom shop.

The true “eff, yeah!” moment for us was hearing the “ding” on steel after hitting an 18-inch steel plate at 2,000 yards using dope from Hornady’s 4DOF ballistic solver, .300 PRC ELD-M loads, and what had to be a heavy helping of luck. Even though the cartridge made it’s SAAMI debut a couple months ago, the 300 PRC cartridge was seeing chamber time as far back as 2010 when it was designed by one of the Hornady guys who came up with 6.5 Creedmoor, Joe Thielen.

It was first used as a benchrest cartridge, but word of its merits traveled and it eventually caught the attention of a group of cool kids in the U.S. military.

That interest, no doubt, fueled work on the cartridge and ushered its commercial release along with Hornady’s December 2018 announcement that 300 PRC was “tested and selected by the Department of Defense for its extended long range sniper program …”

They went on to say the cartridge outperformed the .300 Norma Magnum as well as several other cartridges in testing past 2,000 yards. That last bit tells us even if Hornady is currently the only company loading 300 PRC at the moment; there’ll be more. Lots more.