It's shemagh weather – I'm starting to see lots of people wearing them, both on the range and about town. They appear in a number of colors and patterns, from branded versions (like the Tactical Tailor version you see my niece wearing in the picture above) to XGO's FR/antimicrobial versions (like the tan one you'll see below) to the “urban/adventurer” versions such as the ones offered by TAD Gear. Shemaghs can be utilitarian or a fashion accessory, though not everyone wears “tactical” colors.

I've been wearing one when it's cold (or dusty) since introduced to them by British troops in the early 90s – my kid actually still has the one I wore during the unseasonably cold weather we had in Oklahoma during the Alfred P Murrah Building response. Since then they seem to be increasingly popular (and not just in the military), though perhaps they were ubiquitous all along and I just didn't notice it. Infantryman of the 45TH IBCT in Afghanistan wearing a shemagh while embedded with the ANA in Chamkani District, late '03. 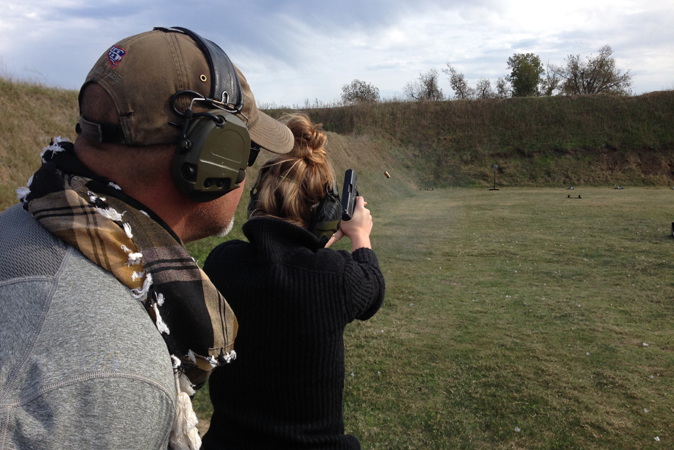 Another niece, on the range with Daryl Holland of Alias Training in his shemagh.

Lots of companies make them now – Combat Flip Flops has some very nice ones, including on that is hand embroidered at a woman-owned factory in Kabul and the cashmere “cashmagh“. Sweden's Tac-Up Gear makes several, including one in “digital winter” and “jolly roger” camo patterns. Proceeds from Canada's 2 Cent Tactical support Wounded Warrior Canada and Australia's PLATATAC  offers several in different patterns. Closer to home Fox Outdoor makes AK-, grenade- and M-16 patterned shemaghs and of course there are the shemagh-based “Multi-Wraps” from Mil-Spec Monkey.

There are not doubt many others out there. Sound off if there's one you like (just please don't use the phrase “tactical scarf”). XGO shemagh on the left. Apparently I'm much more susceptible to the cold than the boy. RECOIL contributor Nate Murr in Anbar Province in a shemagh. RECOIL contributor Aaron Cowan on the range with his agency in shemagh. RECOIL Contributing Editor Reeder at a “side job” in a shemagh.

If you'd like to learn how to tie a shemagh properly (vs. just throwing it around your neck to keep the wind and the rain off), check out this article from Art of Manliness. You can also watch this video from the same page. Below that you'll see TheHossUSMC talk about tying his shemagh and how he cares for it.