The IWI TS12 Shotgun – Do Androids Dream of Israeli Guns?

If your childhood didn’t include watching colonial marines vying to nuke xenomorphs from orbit (it’s the only way to be sure) or mobile infantry going on a bug hunt and taking coed showers, then this piece might not entirely be for you. Those feature films certainly inspired the imagination at a primal age, but the official announcement of the formation of the United States Space Force on December 20, 2019, started ringing some bells.

No, the USSF won’t be fighting in orbit anytime soon. And no, even if we’re involved in orbital combat, it definitely won’t look like either of the movies we mentioned. In the guise of outfitting the TS12 for a hard (realistic) near-future science fiction, we found some DoD and NASA employees who wanted to nerd out with us on these subjects. And learned a lot along the way. Before we dig into those Kurzwellian thoughts, let’s talk a bit more about the IWI Tavor TS12.

As the name implies, this is basically a 12-gauge Tavor, but there’s more going on here. Instead of trying to reinvent the wheel with a box magazine à la the Saiga-12, IWI wanted to stick with the standard (and relatively reliable) tubular magazine.

The TS12 actually has three tubular magazines, but this is far from the first time we’ve seen this. The Roth Performance XRAIL system famously extends the capacity of a Benelli M2 to 25 shells with four automatically rotating tubes; it never really caught on but go way back to RECOIL Issue 9 for a full review. More recently, we’ve seen manually operated shotguns with dual magazine tubes, such as the Kel-Tec KSG and the Standard Manufacturing DP-12. As for the IWI Tavor TS12? It bridges the gap. The Tavor TS12 is a gas-operated shotgun with three tubular magazines that have to be manually rotated when empty.

Of course, being based on a Tavor rifle means this guy’s a bullpup. All told, you’re jamming up to 15 shells into a shotgun with an 18-inch barrel that has a factory overall length of just over 28 inches. In fact, it’s shorter than our 13-inch-barreled Remington V3 TAC-13, which we registered as an SBS to legally put a stock on (full details in RECOIL Issue 42), but with three times the capacity.

The futuristic looks brought us to the table, but we stayed for different reasons. Field-stripping the TS12 is a little different, but easy once you’ve done it a couple times.

Controls & Operation
While the Tavor TS12 initially appears heavy and ungainly, it feels quite different once it’s in your hands. The simple crossbar safety selector is easy to manipulate. You can load or top-off from either side of the shotgun. The lock to rotate tubes is a snap to hit with your trigger finger. Though the tri-tube arrangement may look ungainly, the operation isn’t. When one tube goes dry, simply push the locking lever and rotate in either direction. The first shell in the next tube automatically chambers when rotated into place and is ready to fire.

Very clearly, the Tavor TS12 was meant to be totally ambidextrous, and there’s even a vestigial ejection port cover on the left-hand side. However, at least at the time of this writing, your TS12 will have to be sent to the American IWI facility in Pennsylvania to fully convert it for left-hand use. The charging handle is easy to use, well-located, and can be swapped for a lefty.

There’s an “H” setting for higher pressure shells, which reduces gas flow, and an “L” setting for all of the cheap stuff. Changing this setting requires the use of a tool of some kind, and in a pinch, the handguard can be removed to do it without tools.

The handguard itself, equipped with ample Magpul M-LOK slots for accessories, is held in place with a ratcheting barrel nut, similar to a Remington 870 magazine tube locking nut. A wire spring acts as a stop between gas settings, but we found it far too easy to lose. If we were IWI, we’d definitely readdress it.

The barrel itself is threaded for Benelli/Beretta choke tubes. This inspired us to contact JMAC for a custom brake, detailed later in this piece. 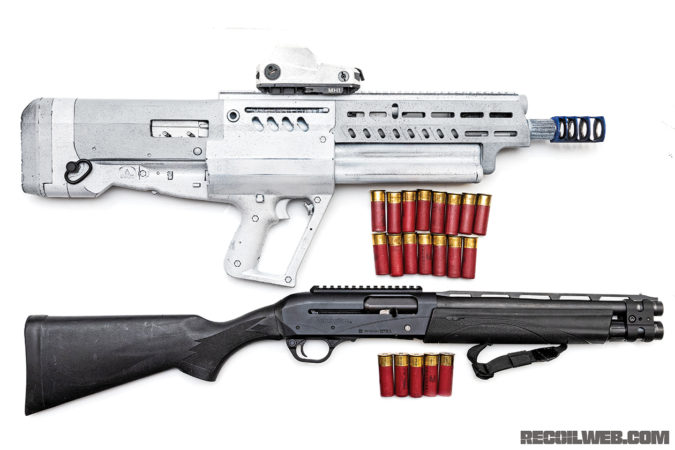 The TS12 is shorter than our 13-inch SBS, but with three times the capacity.

At the Range
One of the common complaints we’ve heard about the TS12 is that no one seems to be able to quite lock down what ammunition to use. In the extensive 60-page manual, IWI recommends shells with velocities over 1,250 feet per second. But as with any semiautomatic shotgun, the real truth emerges when you shoot it.

Despite whatever recommendations you hear, with the TS12 and virtually any other semiautomatic shotgun, you should always grab as many different types of 12-gauge ammo that you can. Try each out, first with the gas set to high and checking for function — not just if it’ll fire, but also if the first shell from the next tube will properly load.

For every load that works, tear off the part of the box that lists key specifications like make, load, dram weight, etc. Then, using a marker, write down the gas setting. Put this little piece of cardboard inside the shotgun case for your next outing or shopping trip so you know what to buy the next time around.

For us, cheapo Federal bulk pack cycled and loaded just fine, as did the Winchester equivalent. The main problem child for loading was Suprema, which sometimes wouldn’t fully cycle resulting in a stovepipe malfunction and otherwise wouldn’t feed and chamber properly when rotating tubes. But, boy oh boy, did the Tavor TS12 absolutely love every round of buckshot we fed it. But our experience isn’t universal. Check for yourself and document it.

Given the tri-tube magazine arrangement, combined with a bullpup layout, we were initially concerned that shells would be difficult to load. As a right-handed shooter, we found the left-side loading gate to be fairly easy to adapt to, and nothing was weird and out of place like we’re used to with bullpup rifles. At least one loading gate was simple to reach no matter what shoulder the shotgun was fired from.

It may seem strange that 15 shells loaded and ready up-front didn’t ruin the balance of the TS12 too much, until you remember that as a bullpup, most of the heavier operating parts are right against your shoulder and not a foot in front of your face. This little guy balanced great, and we’re still a tad mystified as to how they managed to cram an 18-inch barrel and 15 shells inside.

The hefty 10-pound-1-ounce trigger initially left us wanting, but to be fair, this is a shotgun and not a precision rifle. Still, we were easily able to effectively shoot targets with multiple hulls in the air. Worked over by a good gunsmith, we have no doubt this would be more than acceptable for a competition situation and is A-OK out of the box for combat, if one required the use of a shotgun outside of breaching a door lock.