The AR-15/M-16 pattern of rifle has developed from a lightweight carbine in the 1960s to an adaptable platform that can be built to suit a variety of roles. One role is an accurized carbine, sometimes called a DMR (designated marksman rifle), an SPR (special purpose rifle) or Recce (reconnaissance) rifle. All of these are references to former US military programs, but perhaps most iconic is the Mk12 Special Purpose Rifle made by Naval Surface Warfare Center Crane for special operations forces.

The Mk12 program updated old M16s with a new upper featuring an 18-inch match-grade stainless steel barrel, free-floating handguard, match trigger, and a 2.5-10x riflescope. A rifle with these qualities provides an accurate and handy system that can increase the effectiveness of a trained marksman to 6-800 yards, while also retaining the ability to engage up-close. The qualities of a DMR/SPR/Recce rifle make this a popular concept with many different shooters.

Such a rifle is useful for target shooting, hunting, and/or competition. Ready to go out of the box is the Knights Armament SR-15 LPR “Light Precision Rifle,” which embodies as the modern SPR. At the apex of the AR manufacturers market are just a few companies building high-quality rifles. Knights Armament is in this elite fraternity, specializing in military-grade weapons and accessories. The customer base for their SR-15/6 and SR-25 rifle variants is a whos-who of top tier units in military and law enforcement circles. KAC’s thorough focus from R&D to manufacturing, while using high-quality materials and maintaining intense quality control, combine to produce products that perform when needed in all corners of the globe. The heart of the SR-15 LPR is an 18” stainless steel, 1:7 twist match barrel with a custom 5.56 match chamber. The Mod 2 gas system is a proprietary KAC design optimized to minimize felt recoil, function both suppressed and unsuppressed without adjustment, and continue to run when heavily fouled. Additionally, the gas port for each barrel length has been optimized while the gas block is retained with a lock ring. The receiver/gas tube interface is also locked into place. These improvements were made to secure the gas system and minimize gas leakage.

The E3 enhanced bolt has an enlarged bolt face and rounded bolt lugs for a better fit with the barrel extension and increased bolt life. The extractor has been improved in shape and the pivot point moved forward for better function and reliability. Finally, the cam pin and firing pin have been tweaked in size to allow for more bolt material to further reduce the potential for bolt breakage.

KAC has been an innovator of AR-15 handguard rails designs for over 20 years. The latest SR-15s feature the URX4 handguard with MLOK mounting points, which allows specific placement of rail sections and accessories. The URX4 is sized comfortable with a 1.7-inch diameter, with a full-length top Picatinny rail and an integrated QD sling mount on each side. One of the biggest features and what differentiates the URX4 from other designs is the rail is also the barrel nut. This simplifies the overall design while also being sturdier and minimizing deflection when putting pressure on the rail whether on a barricade or using a bipod. At 13.5-inches in length, the URX4 covers the gas system and is long enough to accommodate nearly any accessory while also allowing the shooter to hold the rifle in line with modern shooting techniques.

The lower receiver is fully ambidextrous, with the standard AR-15 controls in addition to an ambidextrous safety, magazine release and bolt release. The ambidextrous magazine release and bolt release are positive in function and easy to operate. The placement is intuitive and requires minimal training to get accustomed to. Additional features of the rifle include a KAC 2-stage match trigger, six position SOPMOD stock, integrated QD sling swivel end-plate and KAC adjustable micro sights. 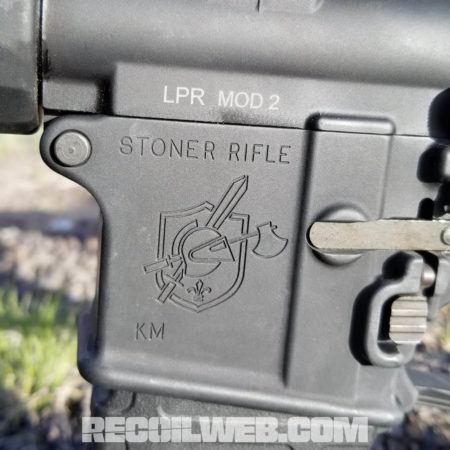 At the time of writing, my notes indicate over 1,500 rounds have been fired through the rifle. Configured for precision shooting with a Nightforce ATACR 4-16×42 F1 and KAC bipod (read review here), the vast majority of rounds fired were between 100-600 yards with some shots over 800 yards. The LPR has been used for fun shooting, at a gas gun competition, and for range demonstrations. No noted malfunctions have occurred with standard USGI 30rd, Magpul 20 and 30-round PMAGs, and Daniel Defense 32rd magazines. The only issue I had with the rifle was one lot of IMI ammunition blew some primers due to overpressure in the heat, however changing lots remedied the problem.

Shooting for groups at 100 yards is a good baseline, however, what was impressive was how consistent the KAC was at further distances. At 300 yards multiple 2-2.5-inch groups were attained with the different brands of ammo. At 600 yards it was easy to get hits on a 45% IPSC plate (8×13.5-inches). My LPR has been shot in the desert and mountains of Arizona, swamps in Louisiana and heat and humidity of Georgia, but it always ran and is always very accurate. At around 750 rounds, a SilencerCo ASR muzzle brake was installed for use with an Omega suppressor. Accuracy was not affected by this change; however, a .3-.4 Mil point of impact elevation shift was noted when the suppressor was attached (ammunition dependent). Unsuppressed the ASR muzzle brake removed the little felt recoil that was present with the QDC brake. With the Omega attached, the KAC Mod 2 gas system works as advertised and did not have a noticeable increase in backpressure, bolt speed or recoil.

After some extensive travel and shooting with the SR-15 LPR, I'm having a hard time finding fault with the rifle. While Knights does not make cheap rifles (MSRP about $2700 and street price a little lower for the LPR), the features, quality, accuracy, and reliability justify the price tag. If you're looking for an out-of-the-box accurate, handy and reliable rifle that is a modern version of the venerable Mk12 SPR, look no further than the KAC SR-15 LPR.