Once Hiram Maxim’s machine gun had been adopted by British, American, and Russian armed forces, the hunt was on for an equally reliable automatic weapon that didn’t require six men, a mule, and several small boys to operate. There’s an almost watertight case for the first successfully fielded light machine gun being the 1914 Lewis gun, though at 28 pounds, “light” is a relative term. Relative to the 60 pounds of the Maxim, that is.

Despite being a quantum leap in portability, the Lewis, like the BAR in American service, suffered from its lack of a replaceable barrel, severely limiting the number of rounds that could be fired in support of assaulting infantry. While the requirement for a squad automatic weapon was identified all the way back in 1917, at least in U.S. service, it seemed as if the magic combination of quick-change barrel, belt feed, and being chambered in the same ammunition as the rest of the squad’s individual weapons wasn’t ever going to happen in the same gun.

At least not for long — there was a brief period of sanity in the early ’60s when the M60 and M14 were issued together, but then 5.56 became the flavor du jour, and infantry squads were stuck with a SAW that required ammo which couldn’t be used in their rifles, and vice versa. It took until 1984, and the adoption of the FNH Minimi, before soldiers finally got the weapon they’d been asking for.

The prospect of a lucrative contract from Big Army was a pretty sizeable carrot, spurring ’80s designers the world over to sharpen their pencils. Several submissions from overseas were in the ballpark — the CETME Ameli and Daewoo K3 checked all the boxes, while the Singaporean Ultimax designed by Jim Sullivan was the lightest of the bunch. Also in contention was the Ares LMG designed by Sullivan’s boss at Fairchild, none other than the prophet Eugene Stoner. Short top cover means more real estate for sighting systems. But getting to buggered-up cases in the event of a stoppage is more difficult.

Reed Knight was a personal friend of the maestro’s, and so it came to pass that Stoner’s final design was refined and tweaked by Knight’s Armament in order to meet the needs of the modern warfighter. Now, those needs might not as yet have been articulated as requiring the adoption of an ultralight SAW, but that hasn’t stopped KAC from putting the gun into production.

As of press time, the third iteration of a project that started life in 1986 weighs in at a feathery 9 pounds (and change) unloaded, balancing like a bull-barreled M4. Despite its pretensions, the M249 most definitely handles like a machine gun. With the LAMG, you could almost forget you have 200 rounds on tap, until you need it.

From the outside, it looks like a prop from Aliens. Its deep handguards have multiple M-LOK slots on both flanks and Pic rails top and bottom to accept all manner of lights, lasers, rangefinders, bipods, and, if you’re feeling froggy, a rail-mounted under-barrel grenade launcher isn’t out of the question. Lightening cuts feature prominently on the sides of the aluminum receiver, which is longer than you’d expect for a 5.56 weapon — more on that later. In order to see just how soldier-proof the LAMG’s design was, we attempted to quickly field strip it without any instructions. Here’s the result.

Its charging handle can be swapped from left to right side operation, depending on user preference and training. And while M240 and 249 gunners may want to run it with their right hand, the rest of us will probably opt for keeping our paws on the standard, AR pistol grip. Stripping the gun reveals a mixture of features found elsewhere, though nowhere in this exact ratio. Press in a latch, and the buttstock slides downward for removal like a M240, while the trigger mechanism housing slides backward like a BREN. Barrel change is M249-ish, but the barrel extension will be familiar to anyone who’s ever stripped an AR.

According to SGM (Ret) Dan Brokos, the current inventory of machine guns leaves a lot to be desired, especially when attempting to use them in the tight confines of the urban battle space. “Special Forces doesn’t currently use the M249 SAW in the assaulter role. While we love the firepower it brings to the fight, it’s old and heavy, and once you put a decent optic on the topcover, it becomes difficult to reload and clear malfunctions. I’ve used the LAMG, and can shoot that motherf*cker off the shoulder all day.” Although it points like a rifle, it’s most definitely an MG, and as it fires from an open bolt, it’s worth taking a detailed look at the mechanism. It’s full-auto only, with a sear that, when cocked, engages a ledge on the lower surface of the carrier, holding it fully to the rear against pressure from the recoil spring. On release, the carrier flies forward and a lug at the 12 o’clock position on its multi-lugged bolt (hey, it’s a Stoner design — what did you expect?) strips a round from the first M27 link on the feed tray and pushes it into the chamber.

A sinusoidal cam track in the carrier cams the bolt into its locked position, and there’s about a 1⁄4 inch of dwell between full lock up and when the carrier finishes its travel, at the end of which a fixed ring pin slams into the primer. While all of this is happening, the gun’s feed pawls are pushed leftward and ratchet themselves under the next links in the ammo belt.

Once the round fires and the bullet passes a gas port close to the muzzle, propellant is tapped off into a gas block, which lies above the barrel. This acts on a long-stroke piston for about 1⁄4 inch, driving it backward until it reaches four radial ports. Then the gas is vented to the atmosphere, and the carrier with its attached bolt run under momentum to complete the rest of the extraction and feeding cycle.

As the carrier moves rearward, it acts on a feed arm, and it’s here that the design deviates from just about every western, post-WWII belt fed. Rather than reinvent the wheel, most late 20th century engineers simply recycled features from the most successful and iconic machine gun they faced across the field of battle. The MG42 has spawned more imitators than even the CZ-75, and its feed mechanism has been ripped off the world over. Just not in the LAMG. Instead of the usual roller-bearing cam running in a track inside an elongated top cover, the Stoner LMG uses a feed arm that rides in a cutout in the carrier, reducing parts count. This feed arm does double duty as a fixed ejector at the end of the carrier’s stroke, kicking empties out the right side after dragging the next link across the feed tray and into position for the cartridge it’s wrapped around to be fed into the chamber. Rinse and repeat 199 times. 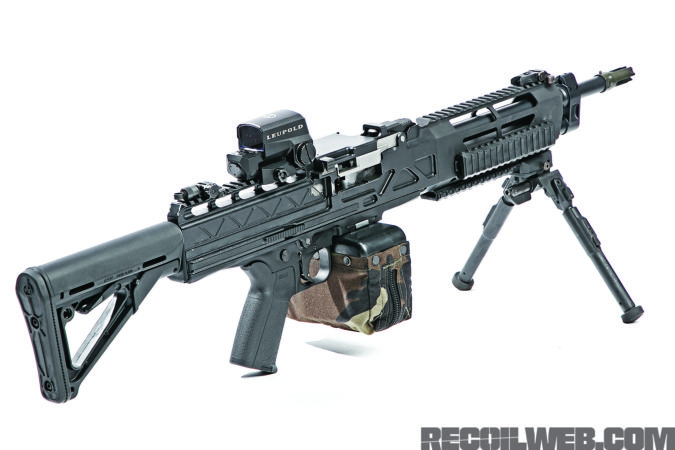 When it’s time to replenish the ammo supply, the user has the option of using a standard SAW box, a 150-round nutsack, or a loose belt. Knight also has a 150-round box that serves to monopod the gun, like ring an AR from a 30-round magazine; speaking of which, there’s no ability to use rifle mags in an emergency.

Of course, after a couple of belts, it’s probably a good idea to also change barrels. To do so, the gunner yanks on the charging handle, applies the safety, lifts the feed tray, and presses the barrel latch. We handled two versions of the gun, the latest of which had a modification to the feed tray, allowing it to be used as a lever to press harder on a stubborn latch — a good thing as it locks up tighter than a M249. Once free, the barrel can then be pulled out forward, out of the handguard, and a new one swapped in. Note that our test gun didn’t have a carrying handle installed, though there was an attachment point milled into the double-pinned gas block.

ROUNDS DOWNRANGE
We took the opportunity to shoot the LAMG at Knight’s sprawling facility in Florida, though time and travel constraints didn’t permit a full, RECOIL-esque evaluation where we got to beat the ever-loving sh*t out of it. Blame the NFA. 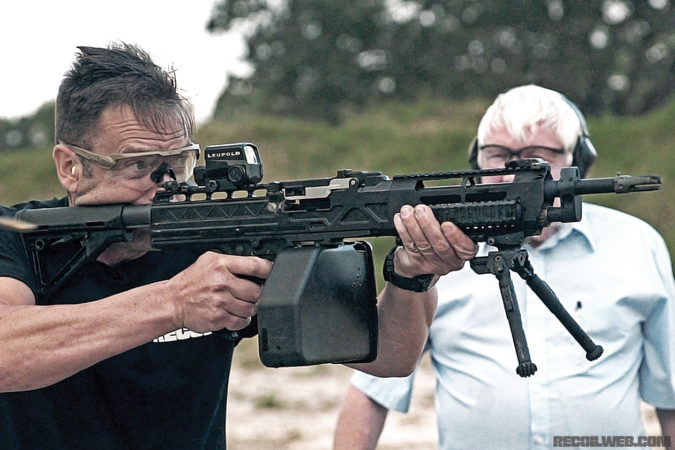 Getting it up and running is a process that should be familiar to any machine gunner. Lock bolt to the rear, lift top cover, lay belt over feed pawls, slap the top cover closed, then proceed to rock ’n’ roll, pulling a trigger that feels like it came out of Belgium — heavy, mushy, and with no distinct break when the carrier falls off the sear.
Remember that elongated receiver? Well, in order to increase reliability without adding mass to the bolt carrier group, the assembly recoils way further than you’d expect — a distance almost twice as long as a red 5.56 case.

This gives two very desirable benefits. First, the BCG takes a long run up to the chamber. Just like a dude shoulder charging a door, more run up means more momentum, which in this case can be used to drag a dirty ammo belt up off the floor, strip a round out of the link, and jam it into the chamber. The second benefit is that on the other end of the cycle, the BCG never actually contacts the rear of the receiver — it just sort of runs out of steam against the recoil spring. A similar system is used in the granddaddy of assault rifles, the StG44, and unsurprisingly there’s a similar recoil impulse in both examples. While the 5.56 NATO round isn’t exactly punishing, everything counts in large amounts, and the LAMG’s long and soft shove, coupled with a slower-than-usual 550-rpm cyclic rate, means it’s a piece of cake to hold the gun on target during sustained bursts. Railed fore-end has M-LOK slots on either side for additional mounting options. Note left side-charging handle.

This being a development gun with a lot of rounds through it, we weren’t expecting the kind of reliability KAC is known for in their ARs. In the course of several belts, we experienced a couple of stoppages caused by (we think) an extractor that lost contact with the case rim, probably due to worn-out springs. Which brought up an interesting problem. Using a short top cover may give a lot more solid real estate on which to mount optics, but it also limits access to the receiver when you need to clear a case — small fingers are a decided advantage.

It’s perhaps fitting that Eugene Stoner’s last design is finally being placed into production by one of his closest associates. The LAMG is the embodiment of his design principles of lightweight, aluminum construction, enclosed receiver, and multi-lug bolt. It remains to be seen whether our armed forces adopt it, especially with LSAT waiting in the wings, but should they do so, our troops will have a significant weight advantage over existing platforms, with all the functionality they’ve been asking for.