Don’t get lost in the dark. If you do, Core Survival has you covered. The Global War on Terrorism (GWOT) has produced some amazing innovations from end-user feedback. Specifically, IR Strobes and marking devices. As a Forward Observer (FO) in the 75th Ranger Regiment, I know first-hand the value of marking devices. Not just for a specialty MOS, marking devices are utilized by any special operations team member. One never knows when they need to mark their position.

The use of marking devices, for both day and night, is particularly important as it applies to marking friendly forces. This is not only to de-conflict with friendly forces, but also to mark a position while communicating with aircraft. Most call-for-fire, or the use of air assets engaging enemies on the ground, originates with ground forces. Ground forces spot a threat, mark their friendly position, and then relay a direction and distance to the threat. The threat can be marked with an IR laser or even tracer rounds. Additionally, when calling for extraction or MEDEVAC the use of marking one’s position is critical.

The use of marking devices, both overt and IR, are critical with airborne operations. While descending, particularly at night, it can be fatal if you are to collide with another jumper. Marking devices reduce that occurrence both in free fall and while under canopy.

In the early days, there were several mediocre options with respect to marking devices. One common tool was an IR Spinner. This was a simple Infrared chem light attached to about 5 feet of 550 paracord. The user snaps the chem light to activate, and then spins the stick overhead in a circular motion. Spotted from the above, the aircraft can see a circular glow under NVGs.

The commonly used IR strobe years ago was IR FRS Military Strobe- 2000M Distress Marker Light. The MS-2000 are still some of the most common strobes used, and issued, in the US Military. These strobes have both IR and white light functions with a blue light function as well. It has a positive on/off switch and is easy to operate at night and takes two AA batteries. The strobe more or less worked for our needs, but it wasn’t always easy to affix to our helmet, and only had a few options for marking.

During the day, marking devices such as a VS-17 panel, and even signal mirrors are used. Any forward observer and many leaders on the ground would have a variety of these daylight options on hand.

The most advanced marking device I have ever used is the HEL‐STAR 6 by Core Survival. The HEL‐STAR 6 is a four-function strobe light that can be configured to a variety of light and color combinations. 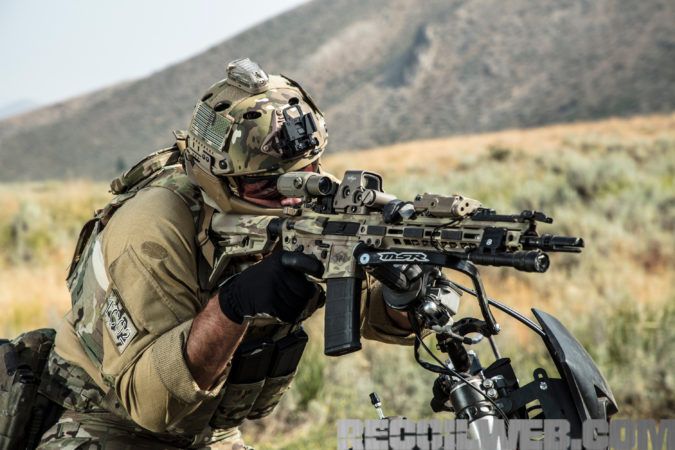 The first thing I notice about the HEL‐STAR 6 is its rigidity, shape, and feel. There is nothing fragile about the device. Components feel durable and all switches to each mode are very deliberate. The shape is designed to contour to the exterior shape of a helmet. Any product that is streamlined in design has a reduction in getting banged or knocked off. Even if it does get banged, the strobe comes with very strong velcro hook tape attached. There are also two integrated tie downs into the base for gutted 550 cord. Simply weave the cord through for a tie down to the helmet or any equipment where you might utilize the light.

The strobe contains a nose switch with two selectors for either IR or overt, and then 3 selectors modes of 0,1, or 2. The most common configuration for the strobe is the nose switch in the down position for IR capability and the up for overt. In the overt setting, mode 1 is a steady green light which can mark the back of a jumper during free fall operations. Once under canopy, you can switch the selector to 2 which activates an overt strobe and the steady green light. This illuminates your canopy and complies with any FAA regulations.

With the nose switch in the down position, the strobe is in IR configuration. Mode 1 is a dim flashing IR strobe, ideal for marking one’s position on the ground in an urban environment. The dim strobe allows you to mark your position while not ‘whiting out' the rest of your team. Mode 2 is a bright IR strobe perfect for marking your element to call-for-fire or exfil. One aspect I like about Core Survival is taking lessons learned and applying it to their product. HEL‐STAR F² combines the helmet‐mounted, multi‐function overt/covert personnel marking functions of the HEL-STAR 6 but with advanced Identification Friend or Foe (IFF) capabilities into a single unit.

Former SOF SGM(R), and Core Survival employee, Jamey Caldwell describes, “Here’s your scenario, I’m on target, I’m moving around at night and I ID something, and I’m unsure of who and what it is. First thing you do as an operator is you have to get better ID of what it is. To do that I come up with my weapon to illuminate it. As soon as I do that with my laser, the F² reacts and starts flashing in IR and alerts the user they have been identified by a friendly through a vibration sensor inside the helmet.”

The F² can also be ordered to meet any color configuration you want.  The integration of an IFF capability in a strobe is something no one has ever done. It’s a direct solution to a very common, and tragic, action that has occurred overseas.

It’s amazing how far we have come in technology since the beginning of the GWOT after 9/11. End users have returned from their time in service to collaborate with engineers, and designers, to create some amazing improvements to equipment.

Premium Leather Holsters from Blackhawk
Win a Darrel Ralph Designs Go Tool
Lightweight, Dirty, and Nerdy
Remembering 9/11/01 - and every 9/11 since