“Although they have been cherished for their good qualities — hunter, guard, herder, friend, worker — the inverse dog is the spoiler of human graves and eater of corpses, the keeper of Hell’s gates.”
— Paul Shepard, The Others: How Animals Made Us Human

According to the U.S. Center for Disease Control and Prevention (CDC), a canine attacks one in 72 Americans annually. Out of the 4.5 million bites, 900,000 of them become infected. Not all of those bites are fatal or even require hospitalization, but others result in loss of senses, disfigured faces, and amputated limbs.

Canine attacks occur all over the world. In Thailand and Cambodia, I’ve locked eyes with the vicious, feral dogs lurking in the alleys. In Haiti, I met what locals called “the Haiti dogs,” that’ve killed and even eaten humans at night. I don’t know the statistics for bites in those countries, but they can’t be any better than ours. Given the grave damage and high frequency of these incidents, it would behoove us train for these encounters. Some beasts want to bite you. Today, let’s learn how to bite back. Canine Defensive Techniques
Decoy Arm: A charging canine is going to bite a part of you, no matter what. Presenting your nondominant arm (especially if it’s wrapped in a jacket) is the best way to keep that bite away from your face, neck, or groin. Once he’s locked on, you have a small but valuable window of time to execute another technique. 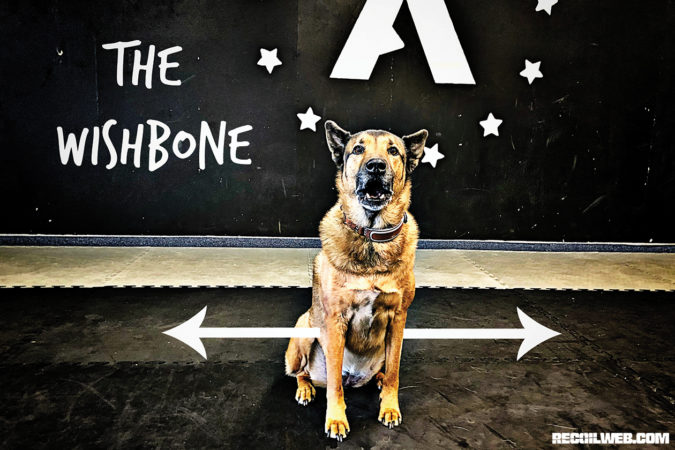 Before the Attack
Canines are territorial creatures, so always be aware of your surroundings. In many instances, “beware of dog” signs have been posted, but missed by people before being bitten. Remember that fences are there for good reason. As a kid, my friends and I once ventured over a junkyard fence to find a shortcut. Within seconds, a nappy Dalmatian was tearing my shoes off as I clamored back over the rusty wire.

The Approach
If you hear barking, snarling, or growling, stop moving immediately and look around. The canine may be simply warning you not to go any further into his territory. If that’s the case, respect his turf and slowly back away. But if he continues to approach, calm down and remember these instructions. Like any pissed off canine, rabid dogs are four-legged missiles that are best to avoid and evade rather than fight. Keep your head on a swivel when moving through unfamiliar areas.

Weapons: Don’t wait to deploy a weapon later on. Do it now. Having tested this with my dog Scully, pulling out a folding knife and opening it while a Malinois is yanking you around by your arm is more than just a little challenging. If you don’t have a weapon on you, scan for weapons of opportunity, i.e. sticks, bricks, etc.

The Attack (Standing):
You tried backing away, but the beast is still coming. When the animal charges, don’t try and kick it as it hurtles toward you through the air. That’s just stupid. You’d have a better chance kicking an incoming missile. Instead, anchor those feet and offer your nondominant arm. You’ll sustain a painful bite but hey, it won’t be in the face, throat, or groin. Once the canine latches on, you can strike it with your other arm or break its neck. Remember that you are a biped, so stay bipedal. Your enemy is a quadruped, so keep him from being quadrupedal. Once the dog has your arm, don’t let him get his front paws back to the ground. Once he gets four on the floor, you’re in for the ride of your life. So stay upright. Take the bite! There’s no reason to make an angry canine’s job easy by presenting it with a tasty face or neck. Keep these vital areas away from a dog’s chompers by staying off the ground.

The Attack (Supine)
Perhaps you never saw the tackle coming. Maybe you did, but you underestimated the power of it. Whatever the reason, you’re on your back and that means you’ve gone to DEFCON 5, my friend. Being on the ground is the worst position to be in, because you’re no longer bipedal. You can’t run. Your eyes, nose, and throat are literally inches from the jaws of death. You’re in Cujo’s world, and you’ve got to get out!

In closing, remember that if any animal attacks you, it’s only using pure instinct. You have the added benefits of higher intelligence, tools, and training. You’re at the top of the food chain for a reason. So stay there!

Let’s Recap
You: Control your breathing. Don’t run. Deploy weapon and wrap your arm with a jacket, if available. Stay on your feet.
Them: The canine’s weapons are speed and teeth. If they attack, they’ll try to tackle you to the ground. Their vulnerable targets are the legs, neck, eyes, and genitals.
Environment: Avoid slippery areas. Look around for weapons of opportunity. Hide in a car, if one is accessible. Climb to higher ground.

About the Author
Molotov Mitchell is a black belt in Krav Maga, the head of Atlas Krav Maga, and a concealed carry handgun instructor through the North Carolina Department of Justice. Trained and certified by the Wingate Institute in Israel, he’s trained groups around the world and invented weapons like the Benthic Knife and the patent-pending Hex Tool. When he’s not standup paddle boarding with his daughter, Ivy, he serves on the Wake County Fitness Council in North Carolina. His favorite color is blue.
www.atlaskravmaga.com
www.trianglekravmaga.com