Yesterday I introduced you to the Govnah, a multi-featured gas block from MicroMOA. Available in several standard suppressed/unsuppressed 2-port configurations (12” barreled carbine, 16” barreled carbine, and 16” mid-length), this block is accurately described as a Modular Regulated Gas Blocks. Today we're going to talk about installation and how it performed.

The installation process of the Govnah is much like any other after-market gas block. Proper gas port alignment is critical. The Govnah is held in place on the barrel by (3) vertical hex screws. If possible, it is best to dimple the barrel under one or more of the set screws; not only does this ensure proper alignment when taking the gas block on and off but also prevents the gas block from walking out of place during operation. Though the Govnah can be run in front of a handguard like a regular A-frame it’s best to have a set-screw gas block partially protected by a free-floating forend.

Ideally gas blocks are pinned in place. However, one of the few aspects of an AR/M16 that has never been standardized are the FSB (Front Sight Block) pin locations. Thus, rarely does an FSB taken from one rifle fit another, let alone perfectly fit over the gas port. There are shops that do install pins on gas blocks which would otherwise be held in place with screws (if there is enough meat on the block to do so).  I fired off an email to a shop well known for this regarding the MicroMOA Govnah but have not heard by the time of this writing. The Govnah utilizes a standard gas tube held in place by the standard roll pin and also an optional secondary hex screw. Like with all attachments that use set screws, use a thread locking compound such as Rocksett when doing final installation. Even if one goes with one of the 2-port standardized plate sets, there still might be a time when plates need to be exchanged (like determining that the, ‘extra gas’ plate is a better fit, plate erosion and what have you). The Govnah can be moved from one rifle to another (even with different barrel and gas system lengths) simply by changing plates. It’s a very modular and versatile piece of gear.

Since plates cannot be exchanged with a forend on the rifle it should not be something considered in the field. However, once the plates are accurately dialed-in, the need to swap regulator plates would be a scarce occurrence.

Replacing the plates is painless if some quick tools are used—in this case a round and a screwdriver (or another round, or a key or… well, you get the idea). Insert a round into the loop on the left side of the gas block to bring the spring tail closer to the detent. After that’s accomplished simply push forward on the spring leg to release the detent and the plate will slide right out. Notice the ledges machined on the top and bottom of the plate, as well as the corresponding cuts on the Govnah. It is impossible to install plates backwards or upside down so there is no accidental mucking with gas port positions or misalignment of the plate.

Regulator plates, just like gas ports will erode and wear out with use. However, unlike a gas port, a plate can simply be replaced. It’s pretty easy to think of the regulator plates as external, consumable gas ports because that’s exactly what they are. As previously mentioned, in order to make a gas port selection you have to be able to get at the gas block. Port selection is very easy. A spare cartridge (or a knife, pen, stick etc) is pressed against the plate to move it. The detents make for a positive, tactile click that can be felt even through gloves. I am using Noveske NSR panels on my forend. While I could reach the gas block with a tool I made it much easier by breaking out the trusty dremel tool and carefully grinding a bit off the panels. Slick and still looks nice. One needs to consider the goal when selecting a plate. Suppressed/Normal? Adverse/Normal? Combination thereof? Different gas port for different custom loads? An ‘off’ setting for use with a .22lr conversion? Even with a standard 2-port plate one still runs the chance of having to modify a plate for optimization as they are drilled on the more conservative side. Understand that different rifle configurations, the amount of suppressor back pressure, and ammunition pressure can vary from manufacturer to manufacturer. Although it takes a little more work during the onset, if one wants to run their gun as smoothly as possible a custom plate is the answer.

I decided to go with a 3-port plate with the following settings:

-Normal (NATO is fine, low-power does not cycle)

The FN SCAR is the rifle that turned me on to a Normal/Adverse setting. Unlike the baker’s dozen gas settings of the FAL, FN went the simpler route with the SCAR. However, I still longed for that quick adjust three-setting system and that’s exactly what the Govnah brought to the table.

Most of the time, the rifle sits on the Normal setting. When shooting low-pressure ammo (or if excessively filthy enough to have a sluggish cycle with NATO ammo on Normal) it gets switched to Adverse. Yes, running NATO ammo on Adverse with a dirty rifle is exacerbating the issue by pumping more gas into an already soiled system – it’s a stop-gap that will keep the gun running until proper maintenance can be addressed.

To tune the custom ports to your liking you will need a set of sharp numbered drill bits, a drill, and something to hold the plate steady (a drill press at a slower setting + vice works well, especially for the smaller diameter holes). First the gas port has to be measured. Pin gauges are the most precise but one can get a rough idea by inserting the shank of a numbered bit and finding the best fit. Corresponding charts can be easily found online. If your rifle is like mine and cycles the cheap stuff on the factory port (and you want that as a setting) the factory gas port size becomes your Adverse setting. Select the port location that you want and have at it. Remember that the plates cannot be inserted upside down so double-check the orientation before drilling. Keep the same spring/buffer setup through the entire procedure. 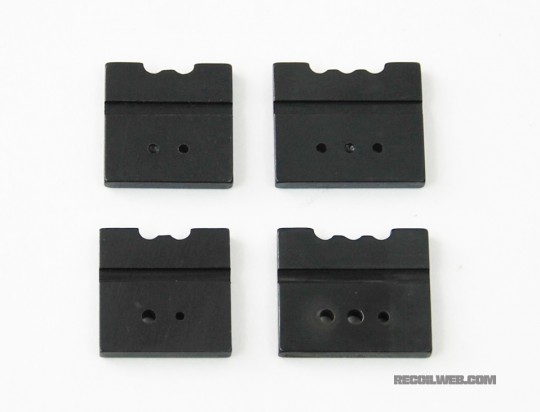 Tuning is best done with the forend removed for ease of plate removal. Start on the smaller end for each port and regularly test for function of your given purpose (be it a suppressor, particular load etc). The rifle should fully cycle and also lock back on an empty magazine. Rifle doesn’t cycle/doesn’t lock back? Open the port up a little more. The standard port sizes listed on the MicroMOA webpage should give you a rough idea of where you want to start.

The port sizes I use are:

-.046 Suppressed (same size as the pilot hole. The manufacturer informed me that many go with .049) For testing and demonstrative purposes I tested full-auto rates of fire (ROF) on each port setting. I choose ammunition on both ends of the NATO-spectrum (PMC M193 for the low and IMI M193 for the high) and used the same buffer/spring setup for each one (H2 buffer and standard carbine spring). Rates of fire are a good gauge of over gassing and we have known parameters for comparisons sake. Factory Colt M4’s are listed to have a ROF of 700-950RPM (Rounds Per Minute). Keep in mind that 950RPM is the cutoff listing and should be biased towards the low end. Select-fire FN SCARs are clocked quite a bit lower (625RPM) from the factory. One could argue that the SCAR specification shouldn’t be used but as we’re testing a shoulder-fired 5.56 carbine it is applicable.

Results were the following: The, ‘Ideal Range’ listed is 625-850RPM. High rates of fire are harder to control even in small calibers because recoil is cumulative. Even the relatively slow rate of 625RPM gives a shot-to-shot split time uncommon in a semi-auto (.096) that is rarely sustained for any length of time. As you can see from the charts, the Govnah not only brought rates down to acceptable levels when unsuppressed but also drastically reduced suppressed rates of fire and increased controllability.

Other Notes and Conclusions

One of the main complaints I have about any adjustable gas system that I’ve used is my own memory. It’s very easy to visibly (or physically, if need be) observe what port setting the Govnah is on. Far too often I have found myself staring at settings trying to recall which position was Normal/Adverse/Suppressed/Etc (this goes for several systems, from the infinitely adjustable to simple 2-position setups). My own solution to this software problem was to make an easy to read label. I cut down some Knights Armament rail panels and marked them appropriately. So far I’m partial to the, ‘shhhh’ one. Whether you are using a suppressor, have a too large gas port from the factory (or from erosion), or simply want your rifle to run as placidly as possible with different loads, the MicroMOA Govnah is an elegant solution. They are currently available from MicroMOA (at http://www.micromoa.com) for $149.99.

If you missed it, read part one of the Govnah review here.

About the author: An experienced Marine combat veteran, Dave Merrill was formerly an urban warfare and foreign weapons instructor for Coalition fighting men. Dave is currently an instructor and operating manager for MilCopp Tactical. MilCopp teaches and advocates a constantly evolving amalgamated method of military and law enforcement tactics. These TTPs are based on a combination of hard lessons learned and practical real-world results. Follow MilCopp on Facebook.