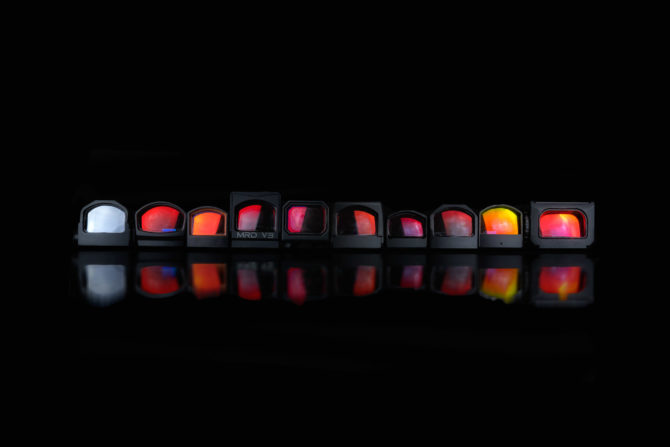 There was a time when even the very best micro red dot sight (MRDS) would only last a couple thousand rounds on a pistol before the violent reciprocation of the slide shook it to pieces. Incremental improvements over the years resulted in some extremely tough and durable sights, some with battery life better measured in years rather than hours. And just as quality red-dot sights for rifles were eventually produced for beer-money buyers, we’re now starting to see the same in the MRDS market.

We decided to focus on budget-friendly dots with a price ceiling of $300. Of course, actual street prices are normally considerably lower. This list is far from all-inclusive and new Micro Red Dot Sight options are being released on a regular basis. However, due to the nature of foreign manufacturing, at least some of the “new” options may well be a rebranded variation of something you see here today.

We used a modified AF 1951 ISO 12233 test chart to evaluate optics. Not only does this chart show resolution, it also provides distortion information including optical error, chromatic aberration, centering errors, and more. For an MRDS, we focus on three optical issues: magnification, displacement, and color cast.

Despite being advertised as 1x, sometimes an optic will slightly magnify or shrink the image seen through the glass. Displacement is the shifting of objects in view, usually vertically with an Micro Red Dot Sight but sometimes horizontally. Color cast represents the accuracy of the color rendition of the view through the optic. This happens because special coatings are used to reflect the red (or green) reticle projection back to the shooter; they allow all light sans red to pass through the glass.

Some of these issues sound rather alarming, but odds are your favorite MRDS has some or all of these errors to some degree. Bear in mind that when you’re target-focused and shooting with both eyes open, these flaws are less important than they may seem at first.

In terms of durability, only time will tell for many of them. Even an optic with the best reputation may fail, so training for a downed-optic is paramount if you’ll be carrying with one. Inexpensive dots can still have a place as a secondary sighting system or on a range or training gun.

For each optic, we’ll explore listed features and use. Several different mounting footprints are seen across these pages. The current most-popular optical footprint milled into pistol slides is that of the Trijicon RMR, with the Leupold DeltaPoint Pro trailing behind. Other footprints that you’ll see are the RMS Shield (JPoint/DocOptic/FastFire) as well as the RMS-C (for subcompact guns). Those with plate-system guns such as the Glock MOS-series or the FN 509T are able to easily accommodate most optics, whereas others will have to seek out conversion plates or universal adapters if they don’t have a pistol with their mount in-hand. The RMS Shield footprint is gaining traction with subcompact pistols, with some manufacturers using it over the RMS-C when space is available.

In CONCEALMENT Issue 19, we got our first look at a preproduction MRD V3. One of the changes you’ll see between the preproduction and full production is the inclusion of a rubberized cover around the optic window. Though we’re told it helps make the dot even more rugged, we’re sure the wave of cease-and-desist letters from Trijicon to many manufacturers last year may have something to do with it.

Adjustment is performed with a small flathead. The clicks are both audible and tactile Each click corresponds to 1 MOA of adjustment.

There are seven brightness settings and no auto-adjust, but it does feature a 12-hour auto-off. The window is one of the roomiest in this article.

Color rendition is very good. There’s no change to magnification, but some slight vertical refraction is present.

In terms of batteries, the CR1632 battery used by the MRD V3 isn’t as common as a CR2032, but still easy to find. It also lasts more than five years and is top-fill so it can be replaced without losing zero. As you may have divined by the name, Burris has been continually improving and updating their Micro Red Dot Sight offerings. Our example is well-used, having spent time on everything from a 22LR Ruger pistol to an offset mount on a scope to an airsoft training gun.

Adjustment is performed with a small flathead. The 1 MOA clicks are just barely tactile, but you’ll never be able to feel them through gloves.

The FF3 uses a CR1632 battery. Battery life is only 5,000 hours so we’re thankful that it can be changed without requiring a re-zero. First introduced in fall 2020, the RXS-250 packs a ton of quality into a street price just above $200. It has a ruggedized body without the cheap Chinese anodizing feel of many others on this list. We’ve seen one dropped several times on concrete that was no worse for wear, and we’re told it passes MIL-STD-810 drop testing while mounted on a loaded pistol.

The clicks are both audible and tactile, and each click corresponds to 1 MOA of adjustment. You need a small flathead to make adjustments.

There are 10 brightness settings and no auto-adjust.

Color rendition is just ever-so-slightly blue but isn’t distracting. Magnification is 1x, but we see some vertical refraction.

For batteries, no complaints here; not only does the RXS-250 use the common CR2032 battery, it can be replaced without removing the optic and has an anticipated battery life of more than five years. Though they’re certainly still making lasers, Crimson Trace began dipping their toes into the optics game a couple short years ago. We began seeing their Micro Red Dot Sight pop up as OEM options on other pistols (see our review of the XD-S Mod 2 OSP in RECOIL Issue 53), and now they’re enjoying a wider release. It’s so new that at the time of this writing, we don’t even have all of the details of this optic. You’ll note the lack of a hard battery life rating, though undoubtedly by the time of publication it’ll be available (and we’re told should be better measured in years and not hours).

Adjustments are made with a small flathead. The clicks are both audible and tactile, and each click corresponds to 1MOA of travel.

There are 10 brightness settings, including three that are NV-compatible. There’s no auto-adjust.

Color rendition has just a kiss of blue. There’s a slight reduction in magnification and also some horizontal refraction.

Yes, this is the cheap red dot with a neat flip-out action. This giant ball of fail is so bad even NC Star has discontinued it because of constant issues. It has since been replaced with the FlipDot Pro. What surprised us is that the NC Star FlipDot ships with several mounts, including a Glock dovetail adapter, Glock MOS plate, RMR spacer, and Picatinny mount. As the name implies, the dot can be flipped up by pressing a springform switch.

At this point, we’d normally talk about adjustment, but the lens itself loosened under recoil within a couple shots. Awesome.

Color rendition is blue but not terrible when viewed head-on. Surprisingly, there’s very little in terms of other optical errors.

For batteries, the FlipDot uses a CR2032. The optic must be removed to re-zero, and no battery life was listed (which doesn’t seem to be a good sign).

Leave this one for cheesy SyFy channel movies. SIG Sauer has long since jumped into the optics game, and they developed the Romeo Zero with their P365 XL in mind (see CONCEALMENT Issue 15). The Romeo Zero is well-sized to ride on top of subcompact pistols as well as 1911s. Though the body is polymer, we’ve seen few complaints regarding durability from those using them every day.

Adjustments are made with the included hex wrench, but there are no tactile clicks. The Romeo Zero ships optically centered, so it’s not too much of an ordeal.

A standout feature is the integral rear sight; the Romeo Zero will co-witness with standard sights. There are eight brightness settings and no auto-adjust, as well as an auto-off and shake awake.

Color rendition strays into the blue spectrum. There’s an ever-so-slight reduction in magnification but no refraction.

For batteries, the Romeo Zero uses a CR1632. Though the sight does have to be removed to replace, with its battery life that shouldn’t be too much of an issue.

The SIG Romeo Zero is a set-it-and-forget-it optic. Give your batteries a swap every other year. Interestingly, the Romeo Zero is assembled in Oregon on an automated, robot-equipped production line rather than purely by hand. We toured SIG’s optics manufacturing facility last year and marveled at the robot overlords putting them together.

You probably haven’t heard of Hex Optics before, but you’ve definitely heard of Springfield Armory. Springfield started Hex to not only have OEM options for their own pistol line, but to also sell them independently. Along with the launch of the micro-mini Wasp, another initial offering will be the Dragonfly, a duty or competition model with an RMR footprint.

A hex wrench is included for adjustments. While there are no tactile or audible clicks, the Wasp ships with an external guide for zero adjustments, similar to the original Burris FastFire series.

Like the SIG Romeo Zero, the Wasp has an integral rear sight for co-witnessing with standard-height front sights. The body is constructed of T6 6061 aluminum, and there’s no user-selectable brightness — auto-adjust is all you have, and the Wasp is always on.

Color rendition is excellent. There’s a slight reduction in magnification and some horizontal refraction.

The Hex Wasp uses the common CR2032 battery, the largest possible that’ll fit into this miniature sight body, and the optic must be removed to replace it.

Swampfox is a newer company, but they’re very ambitious about regularly releasing improved optics. Their first pistol Micro Red Dot Sight was the Kingslayer, a not-so-subtle hint at trying to take down the Trijicon RMR, with which it shares a footprint. Their latest CCW-oriented MRDS is the Liberty — little brother to the duty/competition, Justice.

You need a small flathead screwdriver to make adjustments. Though there’s a guide, adjustments are neither tactile nor audible.

An optional accessory for the Liberty is the Ironsides Shield for extra durability. This stainless shield is designed to route impact stresses from the optic to the footprint itself. There are dual buttons on the left side of the optic to both turn it on and adjust brightness. There are 10 brightness settings and no auto-adjust. After four minutes of no motion, the illuminator will shut off and then instantly wake up with any movement.

For batteries the Swampfox Liberty uses a CR1632 and is replaced from the top with the assistance of a T10 Torx wrench.

RECOILtv All Access: Archon Firearms Type B
Preview - Live in Your Own Shoot House
The King(s) of 2 Miles
Poaching Rhinos - Rhino GX