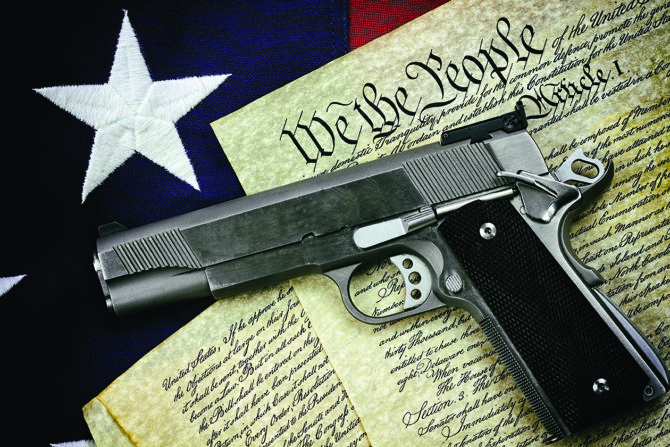 The election of President Trump and a Republican-controlled Congress, on the enthusiasm of gun owners, seemed to indicate that pro-gun legislation would be something easily passed and signed into law. While Congress has been fighting over everything from healthcare to Russia, the only pro-gun bill that seems to have gained any notoriety is the Hearing Protection Act.

With the recent shooting in June at the Congressional Republican baseball practice, the right to defend oneself outside the home has again come to the forefront of discussion. Which begs the question — whatever happened to the effort to somewhat unify the patchwork of states’ concealed carry laws with a nationally recognized standard for reciprocity?

50 States, 50 Laws, 49 Potential Landmines
The laws of all 50 states allow for a concealed carry permit to be issued to their residents and, in some instances, non-residents. Certain states, like Pennsylvania, are shall issue states, requiring the issuing authority to grant a permit to a person who meets the criteria in the statute. Other states, like California, are may issue states, giving the issuing authority discretion as to whether they grant a permit to a person based on nebulous requirements like “good cause.”

An even smaller number of states have implemented “constitutional” carry, which allows people to carry a concealed firearm without a permit, assuming that they’re able to lawfully possess firearms and meet other requirements that vary among the states. While every state provides the ability for their citizens to be licensed to carry a concealed firearm (or has passed constitutional carry), it doesn’t mean they recognize another state’s permit as valid within their borders.

There are two bills introduced in Congress this year to address the problem that over 16.3 million Americans face — their concealed carry permit isn’t recognized in every state. With the current patchwork of laws, it’s not uncommon for people to find themselves being criminally prosecuted, having their property seized, facing jail time, and potentially losing their right to possess firearms and ammunition for life. These two bills seek to address those problems. Bringing Down the House
Representative Richard Hudson (R-NC) introduced the Concealed Carry Act of 2017 (H.R. 38) on January 3, 2017. Under the bill, a person who 1) is not federally prohibited from possessing a firearm, 2) is carrying a valid government-issued photo ID, and 3) either is lawfully licensed or otherwise entitled to carry a concealed firearm would be legally able to carry a concealed handgun in a state where they do not reside, provided that the state they’re carrying the firearm in has a statute that allows its residents to apply for a concealed carry permit or does not prohibit the carrying of a concealed firearm for lawful purposes. Each state’s laws would still apply to the use of force within that state as well as designated areas that would remain off limits to those carrying firearms, such as courts, government buildings, private property, etc.

The House version also includes an affirmative defense for someone arrested while in compliance with the proposed law. It would require the government to show, beyond a reasonable doubt, that the person didn’t comply with the law and provides for attorney’s fees if they successfully assert the defense. This provision is designed to stop states from wrongly charging people and monetarily punishes those who do. The bill also allows a person to sue the state, government, or individual who deprived them of their right and provides for attorney’s fees.

As of the writing of this article, this bill has 207 cosponsors (204 Republicans and 3 Democrats) and is currently sitting in the House Judiciary Committee’s Subcommittee on Crime, Terrorism, Homeland Security, and Investigations with no action having been taken on it.

“[A]t this time, a hearing on H.R. 38 has not been scheduled,” said Jessica Collins, a spokesperson for the Judiciary Committee. “Chairman [Robert] Goodlatte supports protecting Americans’ Second Amendment rights and ensuring they have the ability to travel across state borders with their legally purchased firearms.”