Bushnell reveals several new scopes and red dot sights; all will be at SHOT show in Booth 1#4551. Here’s what they have to say about the new additions to their lineup. The DMR II-i’s improved G3 illuminated reticle provides precision holdovers at any range and also allows shooters to quickly engage moving targets in any light. The scope’s illumination control is integrated with the side parallax focus in one simple knob for easy adjustability. The elevation turret provides 10 mils of adjustment per revolution and is also equipped with the easy-to-set RevLimiter zero stop for a positive return to zero. 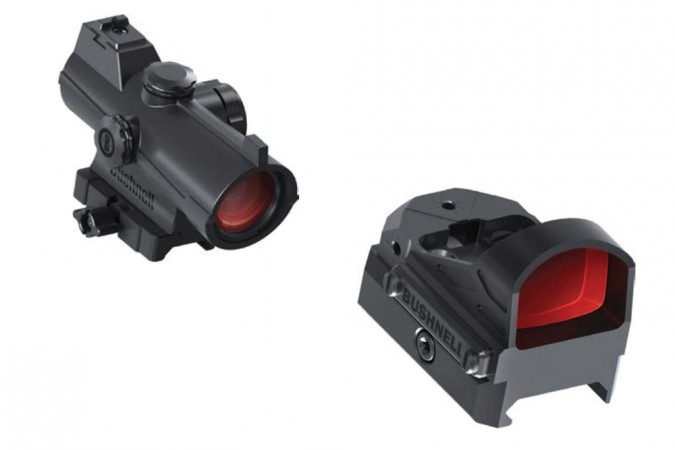 The AR Optics Engulf is a micro reflex red dot sight small enough to fit on a pistol. It projects a 5-MOA dot through waterproof, fogproof and shockproof optics. The compact design is compatible with a large selection of semiautomatic pistols, allowing for a quick, positive target acquisition. “The Engulf is the smallest, lightest red dot in the AR Optics family,” Parrish said, “and is ideal for close-quarter scenarios.”

The new AR Optics Incinerate with circle dot reticle makes target acquisition second nature. Plus, the rear sight on the Incinerate is compatible with Glock dovetail sights. Eight brightness settings offer high visibility in any lighting. “A 25-MOA circle naturally draws the eye to the 2-MOA center dot, making it ideal for both tactical rifles and shotguns,” Parrish said. Rounding out the new additions is the AR Optics 3X Magnifier. Simply mount it behind a red dot optic with the ambidextrous flip mount. Engage the 3X magnifier when you need it, and flip it out of the way when you don’t.