We first came across the Lewis Machine & Tool (LMT) PDW stock back in Issue 23 when we reviewed LMT's shorty LM8CSW300 .330blk Compressor. At the time they weren't available for individual purchase. We also didn't have one for our PDW Stock Buyer's Guide. But now they're on the market–assuming you can find one in stock, so we thought we'd break one down for you today. Like all PDW stocks, some compromises have to be made. If you're in the market, compare this one with others to see if the juice is worth the squeeze.

The first impression is that LMT's offering is simply a chopped down SOPMOD with a shrunken receiver extension tube, and that's mostly correct. The latch of the stock has been moved, but essentially what you're seeing is a SOPMOD with a bandsaw taken to it. Further evidenced by, well, obvious signs of mechanical cutting. We were pleasantly surprised to see like a traditional milspec receiver extension, the LMT PDW features six positions. 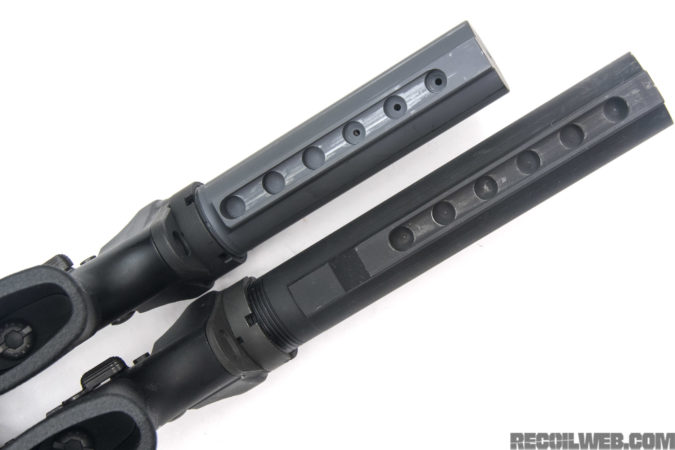 The end plate does have a QD socket, but it's non-functional because due to the limited space available. Here's a size comparison. The LMT PDW gives you an overall package a couple inches shorter. With the stock at full extension, the LOP is almost exactly the same as a standard car stock at one click out. For fun, we put the stubby LMT on a regular extension. It worked and wouldn't collapse further than the end of the stock despite it being open. Similarly, any milspec AR stock can be put on the shorty LMT extension. We're not exactly sure why one would do this though, as it won't be any shorter than a regular carbine and will just severely limit your adjustment. As noted in the buyer's guide, taking off just a couple of inches takes some engineering. This is why virtually all PDW stocks (not look-a-likes which are no shorter than their carbine brethren) require proprietary buffers, springs, and sometimes even bolt carrier groups. And indeed, the buffer and spring has been changed here. The longer round-coiled spring has been replaced with a flatwire, and the buffer itself is significantly smaller. Instead of a proprietary BCG, LMT instead opted for an insert; similar to the additional weights used by AR blowback pistol caliber rifles and conversions. We found that the BCG insert was not universal and couldn't be used with some aftermarket BCGs without modification due to dimensional issues. The top of the buffer is concave and the end of the weight is convex so they nest together a bit. It makes the breakdown of the rifle slightly more difficult, but nothing to write home about. The combination of the buffer and weight is more than a standard car buffer, but remember that the insert is just extra weight and not a dead-blow system like you find inside a normal buffer. Because you're stuck with one buffer weight, most refinement and adjustment will have to take place on the front end of the rifle. Think: adjustable gas blocks and carrier keys. There is still some potential for variable spring weight, as cutting down a Tubb's Flatwire Spring is simple.

At the range with a 10.3″ SBR the system worked just fine even with the gas wide open, but it was more comfortable with some refinement. If you normally shoot one-click out, running 5.56 or .300blk, and like the cheekweld of the SOPMOD this one might be for you. You can visit LMT online here.

Preview - Straight Razors
Courage and Honor in Dallas
Gunshot Wound & First-Aid Kits: Everything You Need to Know to Build Your Own
The Ashley Update: Deinstallation Done in Four Days