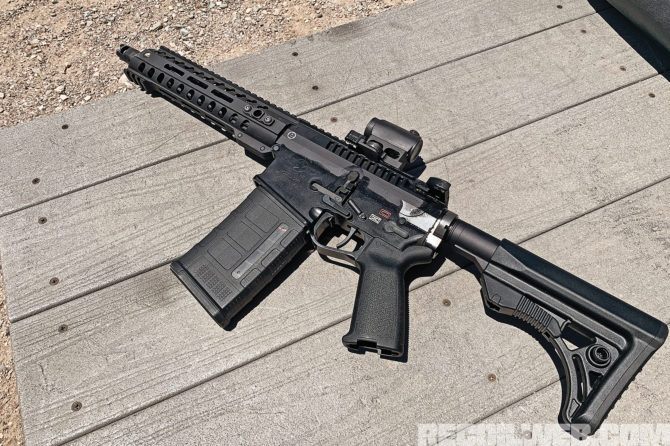 It’s interesting to observe what garners attention within firearms development … and what doesn’t. Flashback to 1957 — the design of the rifle hadn’t changed much for a century. Certainly, technology has advanced, with the percussion ignition-rifled musket leading to self-contained cartridge-fed repeating actions and ultimately semi-automatic battle rifles. But the rifle throughout all of the evolution was still recognizable as a rifle: wood and steel.

There were many key developments in World War II; the advent of stamped sheetmetal receivers and the intermediate cartridge were two of the biggest. Those evolutionary steps were the desperate products of two authoritarian regimes across the pond attempting to out-produce one another, with easily mass-produced weapons not just in flesh in blood. But Americans still had a semi-
automatic battle rifle, a wood and steel creation that fired the full-sized .30-06 cartridge. We had the resources and capability to produce the M1 in large numbers without modern, mass production methods. Nor was there much impetus to consider an intermediate cartridge; the USA just defeated Imperial Japan and fascists at the same time with that combination. It was the “greatest battle implement ever devised,” per General Patton himself. It’s hard to swim against such a strong tide, but that’s exactly what Eugene Stoner and Armalite did in 1957 with the AR-10. The use of modern materials, such as aluminum and fiberglass, along with aerospace engineering methodologies, resulted in a rifle that no longer looked nor felt like what one expected from a rifle. Skepticism and bias from the military hierarchy was immediate. One of those futuristic experimental ideas, a composite aluminum and steel barrel to reduce weight, was a bit too much so and ruptured during the trials, giving the military an excuse to promptly discard the AR-10 as nothing more than a gee-whiz prototype. Thus ended the possibility of its adoption. Back to the old wood and steel we went, and the old-school thinkers were placated.

In summary, the AR-10 was too different, too unusual. It deviated from accepted norms too much to be tested without bias.

Fast-forward to today, and the market is filled with endless AR-10 and AR-15 “variants” that are essentially identical. Certainly quality control, features, and aesthetics vary, but under the hood, they’re mostly the same. They’ve become the equivalent of rifle cordwood. It’s become difficult to determine what’s different, if anything, between one AR manufacturer and another. Ironically, the AR’s forward-leaning design concepts from 1957 are now the baseline of what people equate with a rifle — a truly 180-degree culture shift from then to today.

This prevents some very valid attempts at evolving the AR platform from breaking through the clutter; if it looks like an AR, it’s just another AR. But what if that’s not always the case?

Patriot Ordnance Factory has made some very interesting evolutionary changes with the AR platform, both the 15 and 10, that go relatively unnoticed unless you pay close attention. POF started initially with piston guns, but in this article we focus on their direct impingement rifle, the Revolution. Karl Kasarda is a long-time training junkie and competitive shooter in multiple disciplines, as well as the progenitor of the Two Gun Action Challenge match (2G-ACM). He’s also the match director and creator of Desert Brutality and Finnish Brutality, both of which are major two-gun events in their second year running. Karl is the host and owner of InRangeTV, a history and firearms culture-related social media network. When he isn’t shooting, running a match, or creating videos, he’s hacking or researching something historical or esoteric.