The mastermind behind Military Morons just put up his review of the PIG Patrol Incident Glove (FDT Bravo FR) from SKD Tactical. As usual he does a thorough job and breaks it down Barney style.

I've seen different glove models from the same manufacturer fit drastically differently, which can be frustrating if you're basing the fit of one model to purchase another one. Consistency in fit is tough to find, so I was glad to find the fit of the Bravo to be very similar to that of the Alpha. The Bravo feels slightly snugger when new, but will break-in nicely after wearing it a few times. Finger length was also very close between my Alpha and Bravo gloves. The one anomaly was the right little finger on the Coyote gloves; it was tighter than all the others, but loosened up after wearing it for a while. “…I performed my standard 9mm magazine loading test and coin test. Since the leather is thicker than that on the Alpha, I expected a slight decrease in tactility. Still, I was able to pick up and load 9mm rounds easily into the magazine both by sight and feel. When it came to my regular “coin test”, I was able to pick up the quarter, nickel, penny and dime easily from the table. The wrap-over construction of the Bravo finger tips allow me grab the edges of the coins with the material, as well as feel them. On other gloves with box construction, there's a seam right at the finger tip between the pad and the tip. This seam results in a loss of feel right at that point. The wrap-over construction of the Bravo means that there is no folded material or seam right at the crucial tip of the finger, so everything can be felt through the single layer of leather.

I also put the Bravo through the same challenge which I put the Alpha through: Typing (by feel – without looking at the keys). I was able to type with an accuracy of roughly 80% without looking at the keyboard. You may laugh at a typing test with tactical gloves, until you try it. Then, you'll see how important the lack of seams on the fingertips and proper fit is. Try to do it with fingers that have excess length is an exercise in frustration. I picked typing because I think that it's a good standard of measure of the tactility and fit of a glove designed for detailed work, that anyone can try out themselves. ‘Tactical' tasks are not limited to weapons manipulation and shooting; they can also include operating buttons and dials on a radio/comms equipment, NVG/GPS units or even a cell phone; donning and doffing tactical gear or accessing contents of pouches. It becomes even more important when those tasks have to be performed in low light or in the dark, and rely on touch…. The Bravo gloves performed very well for shooting…Carbine and pistol control manipulation, shooting, reloading etc. were just as good as the FDT-Alphas. It's only the very fine tasks like typing or operating small buttons on a camera where there's a slight difference…

You can read the review in its entirety (and should, if you're wondering about these or other PIG glove styles) and see additional imagery right here.

Military Morons is a great source of information on gear. It probably ought to be on your short list of sites to consult before spending your hard earned ducats on expensive gear. Find 'em online here and on Facebook here. Follow them on Twitter, @militarymorons. 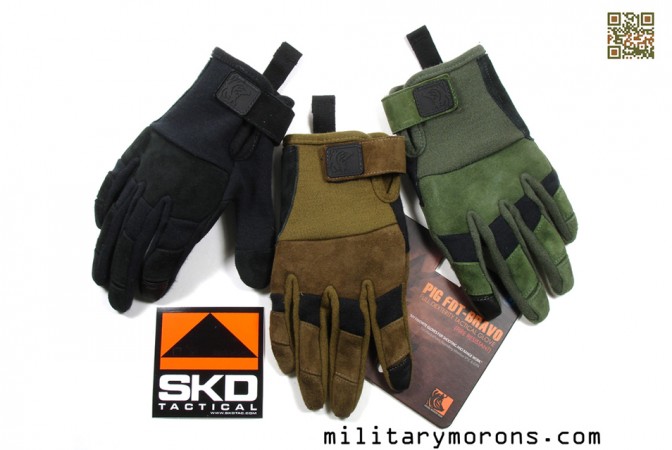