For those just starting out, the process of selecting a defensive pistol can quickly become overwhelming. First, there are the basics: caliber, action type, magazine capacity, size, shape, and cost. Then there are the more subtle and, perhaps more insidious, influences of the aftermarket. Going Glock? Better get new sights. M&P? Hope you picked up that improved trigger group. And if your chosen carry gun doesn’t show up on Instagram 17 times a day covered in Gucci-Cam with holes drilled into the slide, you might just be wasting your money.

We love gorgeous guns, but we also advised that you not select your carry gun based on trending hashtags. So, in an effort to broaden our horizons, we present to you a true self-defense Darkhorse: the Canik TP9 SF Elite. Admittedly, the full name is a mouthful. But all those letters are wrapped around a robust suite of the market’s favorite features.

For the unfamiliar, Canik pistols are produced in Turkey and imported by Century Arms. We previously reviewed the base model Canik TP9 and have maintained from the beginning that it’s the cheapest pistol on the shelves today that’s still worth a damn. The SF Elite has refined the Canik platform so greatly that we felt it deserved a separate look.

First, let’s address our biggest gripe with the original Canik variant — the quasi de-cocking button on top of the slide. This caused us some heartburn, and we’re pleased to announce that the Elite dispenses with this feature. It now operates nearly identically to any other striker pistol that you’ve probably laid hands on. In addition to deleting the one feature we didn’t like, they added a handful of upgrades that we do. 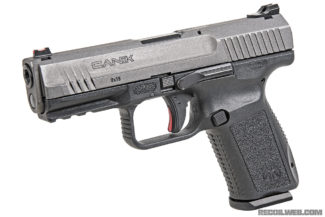 Then we’ll go to this author’s biggest point of snobbery on pistols — the trigger. Generally speaking, striker guns are not known for their miracle triggers. For those of us raised on single-action bang switches, or DA/SA triggers that have received any kind of professional attention, striker triggers will always seem second best. But I can honestly say that the Canik Elite has one of the best striker triggers I’ve ever squeezed — accolades that are even more impressive in light of the gun’s sub-$500 MSRP. After about a ¼ inch of gliding pre-travel, our test trigger broke like a carrot at 5 pounds, 3 ounces with no over-travel and an immediate snapping reset. While some of us still think it’s a touch heavy to call “ideal,” the word we keep using to describe this trigger is clean. The take-up feels like two sheets of glass rubbing together. The break is firm and nearly instantaneous after that 5-pound mark. There’s no mush, crunch, or roll-over at the break point. It’s just pressure-pressure-pressure-bang.

But there’s more to a good defensive pistol than its trigger. If you’re shopping for a handgun that you may potentially have to point at another human being who’s trying to harm you, quality sights are also a vital point of analysis. When outfitting the Elite, Canik went straight to the subject-matter experts at Warren Tactical. They’ve been producing pistol sights for years,  refining their products to optimize both utility and target acquisition. The front sight is a large red fiber-optic tube, quickly becoming a staple in the realm of concealed-carry sight setups. The Elite’s rear sight is a plain black unit with a wide U-notch and an upsweep on the front side for one-handed manipulation.

Speaking of weapons manipulation, the TP9 SF Elite has incorporated several ergonomic upgrades that make running this gun smooth and simple. The slide release lever has been extended, measuring about 1½ inches in length. Even shooters with shorter thumbs had no difficulty dropping the slide. The magazine release button is also slightly larger than average, with the same net result. The frame is textured from the factory, with a finely studded feel. The Elite also comes with two interchangeable backstraps. The strap is held in place with a single roll pin at the heel that can be tapped out with the included punch.

We ran both and found that the backstraps do more to change the shape of the grip, rather than the size. The pre-installed strap gives you a nearly straight grip, while the alternate piece features a long sweeping hump similar to the legacy SIG profile. Having said this, we’ll admit that the Elite’s frame definitely caters to the smaller end of the hand-size spectrum. Many will find this an advantage, as it brings all those extended controls nice and close to your master grip. However, shooters with meaty mitts may have some difficulty with this pistol.