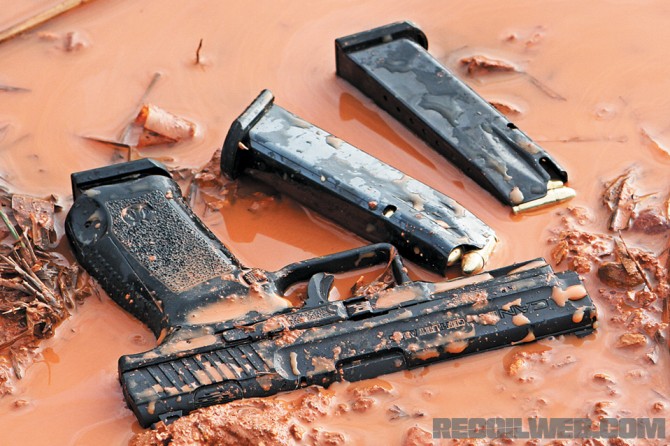 Here at RECOIL, we’re often accused of only reviewing expensive kit. Not true. We try to review good kit — and in most cases, there’s a direct correlation between the price you pay and the quality you get. Yes, the law of diminishing returns applies, but anyone who stands at the bar and loudly proclaims that his Hi-Point is just as good as one of them there Yuropeen guns probably hasn’t had that much exposure to decent hardware.

As the guy responsible for editorial direction and whose balls are on the line if anything goes wrong, I get to splurge a little on equipment that’s a few steps above entry level. I figure I’ve paid my dues, at one time supporting a shooting habit on a $10-an-hour construction job, and I ask your indulgence when venturing outside of the mainstream.

With that kind of background, what the hell is this low-rent Turkish pistol doing in one of Harrison’s articles, you may ask? It’s Cheap. And Good.
OK, so no one’s going to get any points for originality here. It’s a striker-fired, double-stack 9mm service pistol with a polymer frame. What’s different is that it offers a very competent design that’s well executed and packages it with a holster, cleaning kit, mag loader, spare backstrap, two magazines, and a fitted case. All for an MSRP of $399, meaning street prices under 350 bucks. Now that we have your attention, let’s look at some of the details.

Starting topside, you get a cleanly milled, ceramic-coated slide with three dot sights and a serrated rib — nice touch. There’s a loaded chamber indicator for those jurisdictions that mandate that kind of nonsense, secured by an easily accessible roll pin for those of us who don’t care for an extra point of failure on our pistols. If you remove it completely or chop it off level with the breech face, it leaves an M&P-type hole at the rear of the chamber, so brass is fairly evident anyway. The extractor is large and stiffly sprung, which should result in both a long service life and contribute to reliability. We had no failures to eject or extract in the time we spent with it.

Like a Springfield XD, the Canik’s striker is fully cocked after about 3⁄8 inch of slide travel, making for a consistent and reasonably crisp trigger pull. It can be removed from the slide in a similar fashion to just about any of its competitors — there’s only so many ways to skin this cat, just push in the locking tab then pry out the back plate. You can then polish the engagement surfaces to drop the pull weight by almost a pound. If you don’t want to tinker with it, then the Canik’s trigger pull is at least as good as a stock Glock — and with its tactile trigger reset, gets a leg up over the M&P.

Like most of the field, the Canik uses a flat, captive recoil spring and in this case seems to be set up for higher-velocity ammunition. It sits beneath a conventionally rifled barrel (we took the opportunity to shoot lead bullets through this one) that locks up in the usual manner, directly into the ejection port — which itself is comparatively large. The overall quality of machining of the major components leaves nothing to be desired; this is certainly no off-brand, pot metal POS churned out in a garage in Ankara. According to Century Arms, this model passed a 65,000-round endurance test with the Turkish military and is manufactured by a major defense contractor that is NATO and ISO certified.