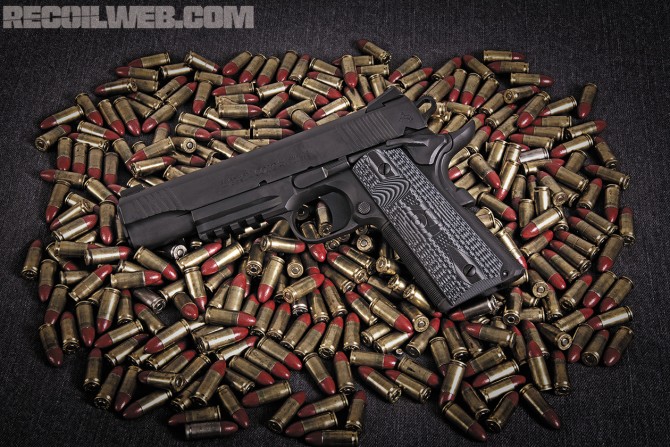 Colt’s Railgun Runs on Powder, But its Current Model Charges on

1911s are a divisive subject, at least in the RECOIL offices. While we recognize the enduring qualities of the prophet John Moses Browning (peace be upon him) and his iconic design, there are those who feel its time in the sun has passed. Despite owning at least five of them, I’m inclined to agree, as gun store shelves are packed with cheaper, lighter, higher-capacity alternatives that are simpler to operate and generally more reliable — in stock form anyway.

That’s the left-brain argument. The other part of our cognitive functions recognizes that there’s just something about a sidearm that’s been relied upon by Americans in every conflict since the First World War and has handed out generous quantities of whoop ass, 230 grains at a time. It’s a manly chunk of steel, the owners of which give exactly zero, err, cares as to what anyone else thinks about their choice of pistol. Then there’s that trigger. That exquisite, linear interface between man and weapon that moves in just one axis and can be tuned down to less than a pound if you’re really brave, with a teeny, tiny reset. For many of us, the wrestling match between our hemispheres winds up with our cutting a check and making room in the safe for the new toy.

It’s probably failed to escape anyone’s notice that Colt’s been having some difficulties recently. A combination of factors including, but not limited to, rapacious investors and overreliance on Uncle Sugar for those sweet, sweet defense contracts almost caused them to shutter their doors. There’s also the not insignificant hurdle of building a business around an almost 110-year-old pistol design and a rifle that’s eligible for Social Security.

Since joining the Hartford, Connecticut, company from Sony, new Senior VP Paul Spitale has been cracking the whip and making sure that Colt’s retail customers, you know, the ones whose tax dollars actually pay for the M4s the Army uses, get a fair shake. As a result, their products can once again be found in gun stores, rather than languishing in the distribution chain. One such product is the Colt Combat Unit (CCU) pistol, shown here and developed in conjunction with former Unit member Daryl Holland and training guru Ken Hackathorn. We got the first one in 9mm to leave the factory; figured you guys might like to see it.

The 9mm 1911 has been around for a long time, but developments over the last decade have made them more relevant than ever. Since ammo makers have taken the FBI testing protocols to heart, there’s not much reason to carry a .45 ACP other than nostalgia — you pick up a round or two of mag capacity, the gun is easier to shoot, and from a 5-inch barrel, the nine is no slouch.

While we don’t have any empirical evidence to back it up (so please feel free to dismiss this next bit as self-indulgent noodling) we’d be willing to bet there’s an additional reliability benefit in the 1911 platform. One of this particular handgun’s fathers is famously quoted as referring to it as, “King of the feedway stoppage.” By chambering it in 9mm, the slide gains a little dwell time due to the shorter round, which in turn gives the magazine a few more milliseconds to present a fresh cartridge. And because of its smaller diameter, there’s less chance of a nose-diving bullet missing the barrel’s feed ramp and impacting the frame.

Details
With an available level of customization rivaled only by the AR, different manufacturers vie with each other to produce the very best version of each of the Series 80’s 66 components, and each will no doubt tell you why theirs is superior to everything else out there. All too often, the temptation to throw every dubiously conceived high-dollar part into the buildsheet (whether it makes sense or not) wins out. Ambidextrous extended slide stop? Sure, why not. Hello Kitty handlebar basket and streamers? But of course, and throw in a pair of leopard print cup holders, too.

In this case, the parts that make up the whole were chosen not by a marketing team, but a couple of guys with some of the longest track records in 1911-dom. Ken Hackathorn has graced these pages more than once, and Daryl Holland should be familiar to anyone who’s glanced at Alias Training’s offerings. Between them, they’ve eliminated the fluff and unnecessary whizzbang bits to produce a 1911 that has all the good stuff, but is devoid of tassels, fringe, and useless crap.