Hi Point 9mm: A Look at the Affordable C9 Pistol If you're searching for an affordable and practical Hi Point 9mm pistol for home defense or concealed carry, check out the Hi Point C9 pistol.

You Want Cheap? We Got Cheap. We Got the Hi Point 9mm.

So, what if you need a handgun for personal or home defense, but your current finances won’t stretch to more than a couple of C notes? Should 2A rights only extend to those with fat bank accounts or who are willing to go into debt if they need a weapon RFN? Is there a gun that won’t break the bank, yet will still offer reasonable accuracy and reliability?

Hi-Point Firearms has been making low-budget handguns and carbines for almost two decades now, so we decided to see if their C9 pistol would fit the bill for an affordable house gun that could be relied on to defend the hearth from nefarious individuals. Almost every other 9mm handgun on the market today utilizes a locked breech, where the barrel and slide are mechanically joined together at the moment of firing, creating a wall of steel around the cartridge. Once the bullet has left the barrel and pressures have dropped to safe levels, the two components unlock and start the cycle of ejection and reloading.

Instead of locking the slide to the barrel, the Hi-Point’s breechface is held against the cartridge head using nothing but spring pressure, relying mainly on inertia to keep the breech closed long enough for the bullet to head downrange.

Normally seen in older sub-machinegun designs, this blowback system requires a comparatively heavy slide in order to provide enough resistance to the force generated by a 9mm Luger round. You immediately notice all of this slide weight when first picking up the pistol. Due to the combination of a heavy slide and polymer frame, it feels much like a brick balanced on top of a Styrofoam cup — making you wonder if the gun is going to flip upside down at any moment. The grip panels are contoured to fit the hand and surprisingly comfortable, but it lack any checkering or stippling to improve traction. Stone simple and uglier than a bucket of smashed assholes, the Hi-Point breaks down into four components by drifting out a roll pin at the rear of the frame.

There’s a low-profile, manual safety catch located on the left side, operable with the thumb if you’re a right-handed shooter. But if you’re a lefty, you’re pretty much SOL if you need to get to it in a hurry. And you’ll need to use the manual safety if you plan on running the pistol with a round in the chamber.

Although it’s striker-fired, unlike a Glock or M&P, there’s no passive safety built into the trigger itself, and it lacks a grip safety found on, say, an XDm. The trigger itself is weirdly inconsistent, requiring a lot of force to get it moving over a comparatively long arc, but once it’s in motion it breaks with a mushy feel as the striker slips off the sear.

Reset is indistinct and occurs about halfway through the stroke — if you’re lucky enough to find it, rejoice! You’ve just cut the original 10-pound trigger pull roughly in half.

A set of adjustable sights can be found on top of the 1.25-pound slide, connected by a 0.290-inch wide rib; the front sight is cast into the rib and the rear is plastic and somewhat fragile-looking. To pack as much pot-metal into the slide to make it heavy enough to safely contain the pressure generated when firing, the top of the slide sits higher than usual, creating additional torque as it cycles.

Bore axis sits roughly where you’d expect it to be, but the sights are carried about a ½ inch higher than on a typical 9mm semiauto. The finish is a uniform black on the frame and grip panels, with a crinkle texture to the slide’s coating, which helps to get a secure grip when loading and unloading and also during stoppage drills. More on this later. Get the angle wrong and no matter how hard you push, it…err…isn’t going in there.

The C9 is fed from single-stack magazines, one of which ships with the gun, with 10-round and 8-round versions available.

Being a single-column design should by rights aid reliability, as cartridges only need to move in one axis while in the magazine, whereas in a double-stack mag, rounds must roll up the inside of the mag tube and against each other as they progress northward to the chamber. As a result, getting a double-stack to feed reliably is a considerably harder feat of engineering.

The pistol’s magazine release is in the usual place and easy to manipulate with the thumb when in a right-handed grip, and mags drop free. Reloads are a little more involved, as the magazine must be presented at the correct angle in order to fully seat — get it wrong and they’ll hang up halfway up the mag well.

The slide lever may be used to manually hold open the slide by engaging a takedown slot machined in the left side.

RECOIL contributor Mike Seeklander uses his “REAP” test when evaluating new guns for defensive purposes, so that seemed like a logical place to start. Hell bent on assessing the C9 using the criteria of “Reliability, Ergonomics, Accuracy, and Power,” we loaded up the range bag with an assortment of ammo, grabbed some steel and paper targets, and then headed to the local shooting spot. 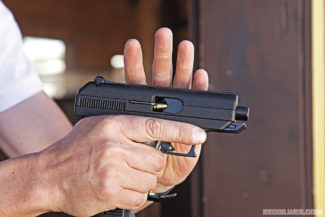 In keeping with the assessment of the C9 as a viable defensive handgun, I fully loaded the first three mags with handloads that had proven to function reliably in one of the aforementioned $5,000 1911s, an XDm, CZ, and Glock.

Running at the spicy end of the velocity spectrum and topped with the very accurate Nosler 115-grain hollow point, these are not exactly cheap garbage practice rounds. Every one of the magazines refused to feed when fully charged, with the round consistently impacting the feed ramp.

With only five rounds or less loaded in the mag, the follower would finally lift the bullet’s nose high enough to enter the chamber. But with more than five rounds in the mag? Forget it. OK, so this particular JHP is a no go in this particular gun. How about some older Hydrashocks? Nope, same deal. FMJs, anyone?

On to some factory FMJ…with a full load of Blazer Brass 124-grain, the nosedive was exchanged for a 12 o’clock misfeed, tying up the pistol to the point where even after locking back the slide, the mag would refuse to exit the grip no matter how hard I pulled on it.

I finally had to resort to digging out the stuck round with a blade, not something I’d want to do if my life depended on it. I dutifully trudged through another couple of boxes of ammo for the sake of thoroughness, resulting in other assorted stoppages, including a couple of failures to go into battery. Then the original nosedive resurfaced. Sights are adjustable and easy to pick up, but failed to survive use as an impact weapon.

Contrary to all sensible protocols, I eventually tried a magazine or two of my off-the-charts 115-grain TMJ Major reloads, which scream out of my shorty racegun at around 1,450 fps. Why? Because (a) I happened to have them lurking in the bottom of my range bag and (b) I was getting desperate to find something, nay anything at all, that would run reliably in this test. Much to my surprise, they fed and ejected just fine. The C9’s grip shape proved to be comfortable and the pistol pointed naturally. A left-handed shooter would have more difficulty during stoppage drills, as a southpaw really needs a third hand in order to hold the slide open by engaging the safety lever in the takedown slot.

The magazine release was smooth to operate and fell naturally under the thumb. The overall feeling of top-heaviness was hard to ignore as the slide cycled, but the recoil impulse was soft and manageable when using normal-pressure ammunition. The C9 was quite finicky with various types of ammo, resulting in a 12 o’clock misfeed that jammed the magazine in the grip. Hi-Point gets its styling cues from DeWalt?

Accuracy from the 9mm Hi Point

Blowback pistols tend to be inherently more accurate than locked-breech designs, all other things being equal, as their barrels are fixed to the frame — inconsistencies induced during barrel lockup are eliminated.

Shot from a bench at 15 yards, the C9 printed groups averaging around 3.5 inches. Not great, but plenty good enough to stop an attacker. This is not a group that you’ll see from our test gun, unless it was fired at contact distance.

A 9mm with modern hollow points should be more than up to the task of self-defense. The trouble is ammo loaded with a modern hollow point proved to be pretty much a non-starter in this particular gun from a reliability standpoint, and the shortcomings of 9mm ball ammo are well documented.

I really wanted to like this gun, as I’ve shot Hi-Point’s 9mm carbine and found it to be a pretty decent range toy at the price. Plus, the company has a reputation for some of the best customer service in the business. Maybe I just got a bad example that is completely unrepresentative of others coming off the line. When employed as a tomahawk, the C9 exhibited acceptable combat accuracy, impacting slightly low and right of its 15-yard group.

I’d hoped the C9 would be the answer to someone’s prayers for an affordable self-defense pistol and was expecting to be won over by its, er, homely looks.

Unfortunately, its numerous and consistent stoppages completely rule it out for this role. And rather than its aesthetics growing on me, I wound up resenting it taking up precious space in the safe, like an unemployable fat girl who’s taken up residence on your couch.

The only rounds that consistently cycled it are not available commercially and would over-penetrate horrendously in a self-defense setting. Its “interesting” trigger prevents it from being a worthwhile plinker, and the C9 is oversized for the capacity it offers.

By comparison, the Glock 23 featured in our DIY article this issue was purchased lightly used for $300. While it may be twice the price and only slightly less ugly, the G23 offers much greater reliability than the C9 in this test — we’d eat Top Ramen for however long it took to save our pennies to get one instead. Also chech out our look at the Caracal F