Civilian Version Of The Professional's Choice

By all credible accounts, the Heckler & Koch HK416 was the weapon selected by DEVGRU (SEAL Team Six) to avenge the United States in the daring raid on Osama Bin Laden’s hideout. In addition, Delta Force selected the HK416 to replace its M4s. Those are pretty astonishing endorsements, so we were excited to get our hands on the civilian version: the HK MR556A1.

Heckler & Koch (HK) has always been fanatical about precision machining, accuracy and repeatability, which are almost expected from a German manufacturer. As with the German transportation system, HK rifles operate like a precision clockwork mechanism. 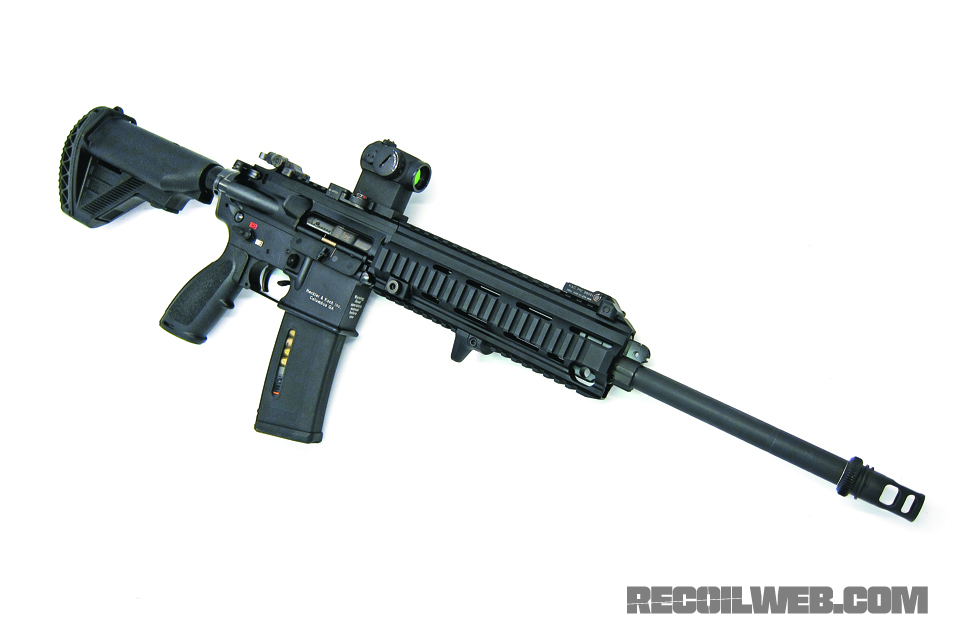 The MR556A1 is HK’s first commercially available AR-platform rifle. It uses a short-stroke, gas-piston operating system that is derived from the company’s successful G36 rifle. With piston systems, hot gases do not enter
the chamber to cycle the firearm, which keeps the chamber and the components housed inside cleaner and cooler. This system has been shown through testing to provide easier maintenance and increased service life of internals and  increased time between service intervals. Those who obsessively clean every weapon after range sessions always welcome gas-piston designs.

HK’s proprietary short-stroke system includes the operating rod and piston situated over the barrel, where a  traditional AR’s gas tube would be. The rod actuates a rotating seven-lug bolt, with rounded lugs housed in a special HK bolt carrier. The rounded edges of the lugs help increase reliability. A proprietary action spring and HK-marked buffer complete the system.

The MR556A1’s barrel is cold hammer forged and 16½ inches long, with a heavy profile. The twist rate is 1:7, and there is no chrome lining. HK engineers choose to not chrome line the barrel because they believed it could mask  imperfections that could reduce accuracy. The barrel has, as HK describes it, a “swagged” muzzle end. This means that the internal diameter of the barrel at the muzzle is slightly smaller than the diameter at the chamber end. HK cites this “swag” as giving the barrel better projectile accuracy and velocity.

To test the MR, we set up a course of fire that involved run-and-gun scenarios with paper targets 5 to 25 yards away and steel gongs at 35 and 50 yards. We outfitted the MR with an Aimpoint Micro T-1, AAC Blackout muzzle brake, Knight’s Armament Front and Rear Flip-up sights and Gear Sector Hand Stop.