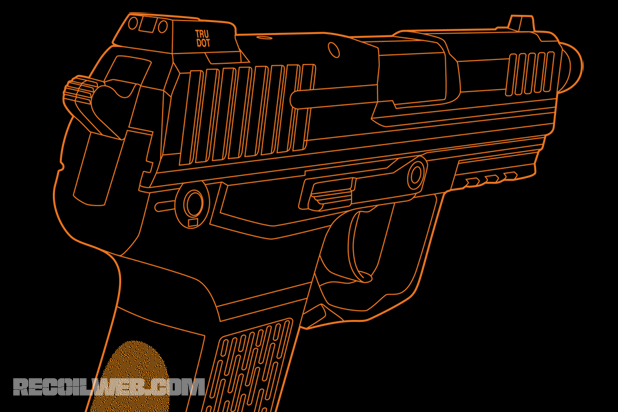 How can you tell someone is lying about serving “in the special forces?” They’re talking to you about it…

The same is true in the gun industry. If it’s a “spec ops” this, or “SOCOM” that, you can usually bet good money that it has yet to go through the rigors of earning that consideration.

Not so with the HK45C. Also known by the Navy designation Mark 24, it truly is used by the best of the best. Much like the elite bearded warriors for whom it was designed, HK’s marketing of the HK45C remains understated. Even though it’s earned the reputation as a “SOCOM” weapon, nowhere do you find the company cashing in on its military status to boost public sales. Moreover, the exact same weapon HK designed and sent to the Navy is available to you and me. Ya gotta give props to HK for that. The HK45C was born from Heckler & Koch’s work on a full-size .45 to be built for consideration in the U.S. Military Joint Combat Pistol program. The HK45, big brother and inspiration for the HK45C, was not only designed to be used by elite soldiers, but designed by one.

Larry Vickers, former Delta operator and the driving force behind HK’s HK45 program, spoke about the evolution of the weapon and the eventual development of the HK45C.

As early as 2004, Larry Vickers and Ken Hackathorn challenged themselves with designing the ultimate combat-ready .45. Their first thought was to have HK build a quality 1911. That idea was short lived and quickly made its way to file 13. SIG SAUER and S&W had already had come to market with battle-worthy 1911s. In addition, an all-steel German-made 1911 would be heavy and expensive, two things not well received by the U.S. military.

Larry said it was then that he and Ken realized that HK was already manufacturing a gun that had many of their desired features, the USP. It just needed some more work to make it a state-of-the-art .45 that had the best operational features of a 1911 in a polymer frame, while meeting the strict requirements of the U.S. Military Joint Combat Pistol program. Larry and Ken approached HK’s military group with a photoshopped sketch of a prototype pieced together from pictures of other HK models, the lovechild of a USP and a P2000. This concept eventually became the full-size HK45. The HK45C would soon follow, melding the HK45 design with lessons learned from developing the P30.