Preview – It’s All Gun and Games… 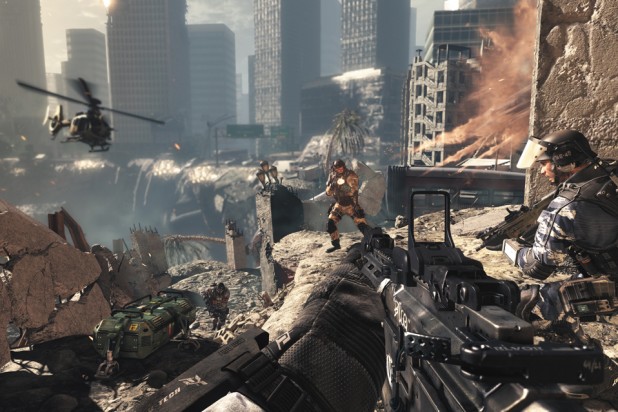 Climbing up the stairs, you spot the bad guy as he loads his AK-47, its distinct cocking sound ringing in the air. Before he can get a bead on you, you raise your suppressed AR rifle and extend a warm 5.56mm greeting. You step over the fallen body and pull a grenade from your MOLLE pouch. Approaching the primary target, an enemy stronghold on the lower level, you pull the pin and toss the grenade through a hole in the floor. Boom. That’s all she wrote.

No, this isn’t an after-action report. It’s a scene from Call of Duty: Ghosts, a video game from Activision recently released in time for the holiday buying season. It’s also the latest entry into the popular military-themed genre — which includes long-running series like Battlefield and Halo, as well as Tom Clancy’s Ghost Recon and Splinter Cell franchises — that has become big business for video game publishers, thanks in large part to their authenticity and “inspired by the news” storylines.

Games have indeed come a long way since the days of Pong and Pac-Man — they’ve even come a long way just in the last couple of years. Today’s first-person-shooter games often feature characters wielding small arms that look, operate, and sound just like the real deal.

This takes more than just thumbing through books or scanning an airsoft replica to get it right. Just as many filmmakers know that specific expertise is required, today’s game producers know that to make a blockbuster action game, calling in the experts is key to authenticity. Sometimes developers have consulted with soldiers who have served overseas. In one case, working on a game might have put the careers of seven sailors on shaky ground after they consulted with video-game publisher Electronic Arts on the development of 2012’s Medal of Honor: Warfighter. In November 2012, seven active-duty Navy SEALs from DEVGRU (popularly known as SEAL Team Six) were reprimanded for “misuse of command gear” and “disclosure of classified material” after an investigation found the men to have worked as paid consultants for two days, according to a U.S. Navy official familiar with the investigation. Subject-Matter Experts
The Warfighter controversy was unique because the U.S. military is often quite helpful in providing details and resources to filmmakers and game designers — when requests come through official channels. However, many game developers try to avoid any complications in the first place and instead work with private consultants.

One such firm is MUSA Military Entertainment Consulting, which is headed by Brian Chung, a retired U.S. Army captain and combat veteran of Operation Iraqi Freedom. He worked on the Medal of Honor series, and more recently consulted on the design of the recently released Battlefield 4. With many veterans now playing these games, Chung said that it is important to get the details right, ensuring that equipment looks, operates, and even sounds authentic.