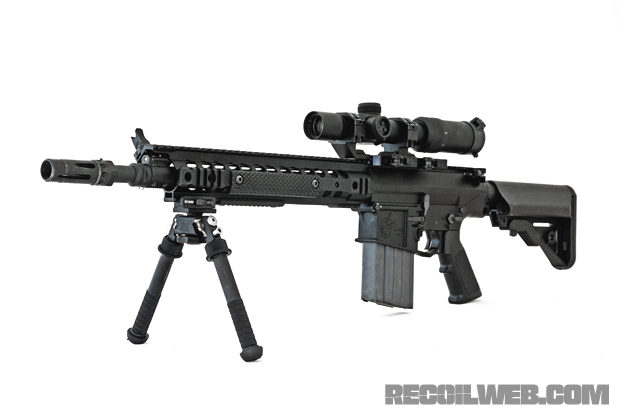 Knight’s Enhanced Combat Carbine
A 16-Inch Precision Semiauto? Don’t Mind If I Do…

On my 13th birthday, I was fortunate enough to spend the day in the presence of a firearms legend. Eugene Stoner hosted me in his home office and spent several hours with me discussing and demonstrating various elements of firearm design, as well as the advantages and disadvantages of many common rifles and handguns. Besides the many rare firearms he allowed me to fondle (including a least three prototypes), I remember with great detail the rifle that he literally had on the drawing board that day in 1990. He was co-developing it with a manufacturer a few miles up the road in Vero Beach, Florida, and spent much time explaining the advantages of the rifle and its accessory rail system. That rifle was the SR-25, and the manufacturer was C. Reed Knight Jr. of Knight’s Armament Company (KAC).

Even as a kid, I was able to understand the value of a 7.62mm precision semiautomatic rifle with the ability to mount a myriad of accessories via a modular rail system. Fast-forward more than 20 years and KAC has taken the SR-25 concept to a whole new level of versatility, while maintaining the core elements of the Stoner design. The SR-25 is an evolution of the 7.62mm AR-10 that actually predates the AR-15/M16. The SR-25 deleted the trademark carry handle, making the platform far more optic-friendly and featured various design enhancements that increased accuracy. The original SR-25 was widely used by special-operations units and law-enforcement tactical teams — early adopters included the U.S. Navy SEALs, who used the rifle in over-watch roles in Somalia. The rifle has since seen widespread military and law-enforcement use, including the Army’s M110 Semiauto Sniper System — an SR-25 variant produced by KAC. As war often does, the global war on terror has forced rapid weapons evolution; in this case, from highly specialized weapons systems into more versatile tools. In the 1980s and ’90s mindset, counterterrorist operators stacking for a building entry wielded sub-machineguns such as the MP5, and the snipers covering their movements often used long and heavy bolt-action rifles. Experiences in Iraq and Afghanistan established that such specialization didn’t work so well when troops had to patrol through complex urban and mountain environments to reach a target building, and a sniper may have to fight his way into or out of a suitable firing position. The sub-gun yielded to the carbine, and the dedicated bolt-action sniper rifle has, in many cases, given way to the precision semiauto.

Twists and Turns
Born of those combat experiences, the SR-25 Enhanced Combat Carbine (ECC) is the latest evolution of Stoner’s AR-10 design. The core of the ECC is a 16-inch, medium-taper 4150 ordinance steel barrel with 5R rifling and a 1-in-11-inch twist. The 5R rifling, which was made popular by the Army’s M24 sniper rifle, uses sloped polygonal lands to form a tight gas seal and to decrease bullet friction. Essentially, it puts less stress and deformity on the bullet and reduces copper fouling that degrades accuracy — a concept that has been around since Metford polygonal rifling was first employed in England during the 1800s. To keep fouling in check even further, and to ensure reliability in dirty operational environments, the bore and chamber of the ECC are chrome-lined. What makes the ECC’s barrel so striking and unique, though, are the ball mill cuts that cover the entire surface. These cuts work like fluting, reducing the weight of the barrel as well as providing increased surface area to dissipate heat.