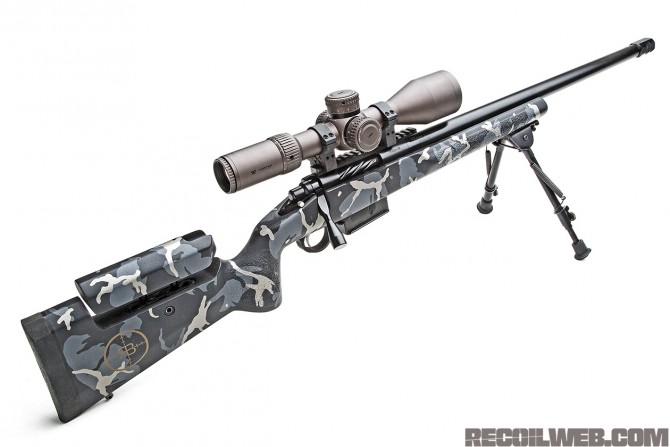 My friend, and the legendary pistolsmith, Stan Chen said it pretty well: “These days, a ‘gunsmith’ is a guy with a torque wrench.” Due to a variety of factors, none the least being economic, skilled craftsmanship in the gun trade is rapidly going the way of the revolver. Talented gunmakers are still around, but when you encounter one you take notice. In a world full of pretenders, promising accuracy that they can’t produce, delivery times they’ll never meet, or attention to detail that’s seriously lacking, R Bros Rifles is the real deal.

The R in R Bros stands for Redell — brothers Travis and Jesse grew up under a gunsmithing father and were raised working in the shop. When the brothers showed up at a precision rifle match and won it using hunting rifles that Travis had built himself, the business was effectively born. R Bros builds a variety of rifles, and hunting guns are very much part of the lineup, but R Bros has become best known for its competition models, likely due to the status of both Travis and Jesse as active competitors in precision rifle matches. R Bros sent us one of their Competitor Tactical models, chambered in 6.5 Creedmoor to take for a spin. The Competitor Tactical is based on R Bros’ own Rogue action, designed by Travis and built by the folks at Defiance Machine. You know a guy is a real-deal gunmaker when he goes through the time and expense of designing his own components, especially something as complex as an action. The Rogue is notable in its absence of a bolt counterbore in the barrel: the Remington 700 was designed with a bolt nose that extends past the locking lugs to surround the case head within the “three rings of steel” (bolt head, barrel shank, and action).

When gunmakers began adapting the 700 and its clones to use Sako and AR-style extractors in efforts to enhance reliability, the pivoting operation of those extractors required that the counterbore’s diameter be extended from 0.705 to 0.750 inch or more. Travis feels, and I cannot disagree, that this oversized counterbore compromises the fundamental safety design of the action.

The Rogue deletes the counterbore and places the locking lugs at the forward edge of the bolt body. The result is a case head that’s fully supported, stronger locking lugs, a longer barrel shank, and the ability to use a mini-16 extractor with no trade-offs. The Rogue’s one-piece bolt has a spiral fluted body and a handle that splits the difference between traditional and oversized tactical knobs.

R Bros uses button-rifled Broughton Barrels, and our rifle came with a 24-inch barrel at a fairly heavy proprietary contour. The barrel was threaded at the muzzle and fitted with a four-port brake, easily removable if the shooter wants to trade it out for a suppressor. Travis does all of the barrel work at R Bros and cuts the chambers using reamers of his own design. He’s a little cagey about his fitting and chambering processes, but he has obviously found a method that works, this rifle is obscenely accurate. Dialing-in a barrel and cutting a chamber that will shoot as good as this one takes quality equipment, skill, and patience — it’s obvious that Travis has all three.

A tactical competition rifle has to strike a balance between accuracy potential and weight and, with a barrel contour this heavy, this setup could easily end up handling like a hippopotamus. That weight is mitigated by the use of Manners MCS-T2A with Elite Tac Shell, which, despite all of its features, weighs only 3.3 pounds. The stock has an adjustable cheekpiece, a vertical grip, and a beavertail-style fore end.