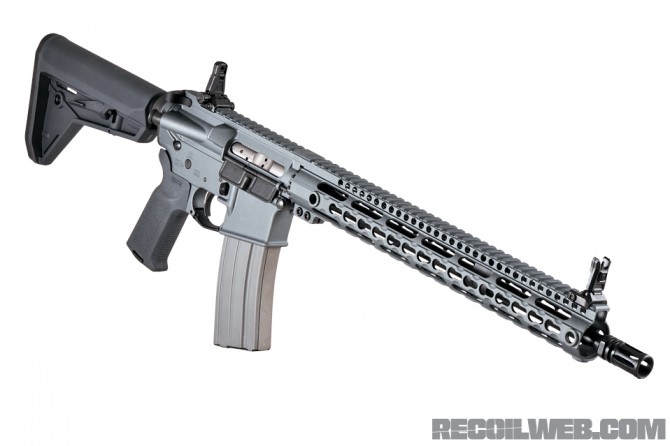 Obesity is a major health problem in America. We all want to lose weight, right? The AR-15, a rifle that has undoubtedly taken on a personality of its own, is no exception. In fact, in recent years “the black rifle” has had much more success slimming down than this author has.

Do you remember what the average AR looked like just last decade? Miles of quad-rail, lasers the size of TV remotes, D-cell Maglites — you get the idea. In the last couple of years, there’s been a distinct shift back to the KISS concept (keep it simple, stupid), of which we’re big fans. There’s also been a resurgence of interest in AR ultra-lights. This is evidenced in things like carbon-fiber-wrapped barrels, modular direct attachment systems, such as KeyMod and M-LOK, and the use of polymer in everything from flip-sights to lower receivers. Equipment selection is a form of mission analysis. Gear up based on needs, not wants. Efficiency is king and less is more — ammo and alcohol notwithstanding.

Sionics Weapons Systems exemplifies this principle, not just with its latest rifle, but with how it runs its business. This small, agile operation runs heavily on customer feedback. We walked into the shop a few weeks ago with a list of specs for a rifle build — a sub-6-pound rifle. The Sionics folks said, “We’re not 100-percent sure we can get below 6 pounds, but we can get close.” Then they asked us to wait a bit, because they were working on something that might fit the bill. Less than a month later, they released the Patrol LW, a 16-inch mid-length gas rifle weighing in at 5 pounds, 14 ounces. For reference, my son was born at 8 pounds, 11 ounces. Given the choice, perhaps my wife would rather have carried this rifle around for nine months. After all, it weighs less and doesn’t cause morning sickness. 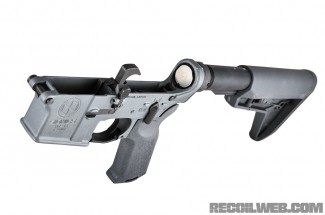 Light Equals Might
So, who benefits from the lightweight AR concept? Just about anybody. If you hunt with an AR, it’s easier to lug long distances over terrain. If you shoot three-gun, a light rifle will drive faster on multi-target hoser stages. If you’re preparing for the worst, it means having one rifle that everyone in the family can shoot. If you work the street or the ’stan and you have to hang a bunch of tech off your handguard, it can help manage the burden. But make no mistake, the Sionics Patrol LW is not light on features. Off the rack, it sports a B5 SOPMOD stock, Ergo pistol grip, VLTOR Gunfighter charging handle, and a Midwest Industries 15-inch SSK forearm. The Midwest handguard is especially nice. It’s KeyMod compatible, with an outside diameter of only 1.5 inches. The fact that it runs a full 15 inches accommodates all shooting styles and protects the pencil-profile barrel from any potential damage or flexing when shooting off benches or barricades.

The heart of this rifle is Sionics’ new lightweight barrel. It’s not fluted, but has a very thin profile. Its diameter is 0.637 inch behind the gas block port and 0.573 inch in front, and it uses a 0.625-inch block. The CMV4150 steel is Melonite finished both inside and out. Every Sionics barrel (yes, every one) is air gauged, magnetic particle inspected, and X-rayed before leaving the factory. It’s chambered in 5.56mm, complete with M4 feed ramp extension and a 1:8 twist. The test gun was capped with a standard A2 birdcage, but other muzzle devices are available on request. For the do-it-yourselfers, this barrel is available standalone from the Sionics website, weighing in at 1.375 pounds.